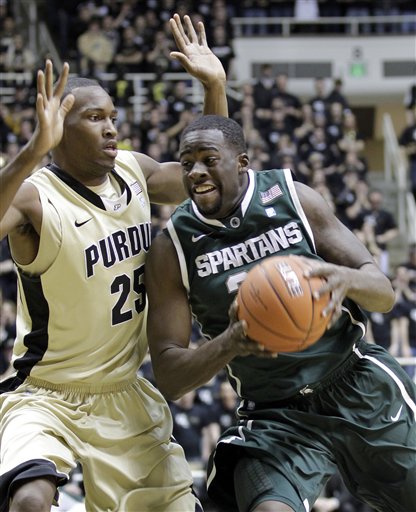 There are a few absolutes entering the 2011-12 Big Ten men's basketball season: 1.) Reigning champ Ohio State is the Big Ten favorite; 2.) Jared Sullinger and Jordan Taylor are the Big Ten's best players; and 3.) Thad Matta will win 20 games yet again. How about some bold predictions, though? Brent Yarina is here to offer one for every Big Ten team.

Illinois – Sophomore Meyers Leonard will be the Big Ten's most improved player. Last season, the 7-foot-1 Leonard averaged 2.1 points and 1.2 rebounds per game, albeit in just 8.2 minutes.

Minnesota – Trevor Mbakwe will tally a double-double in every Big Ten game. He did so in 12 of 18 Big Ten games last season.

Nebraska – The Huskers, in their first year in the Big Ten, will beat a ranked Big Ten team on the road. Nebraska hasn't topped a ranked opponent on the road since Feb. 23, 2008, a span of 10 games, but it did beat three ranked teams at home last season.

Northwestern – The Wildcats will make the NCAA tournament – yes, even with that super soft nonconference schedule. Everyone knows about John Shurna, but Drew Crawford, JerShon Cobb and Alex Marcotullio are young talents who will continue to improve.

Ohio State – The Buckeyes will enter the NCAA tourney undefeated. A year ago, the Buckeyes lost two games entering March Madness, but they're equally talented despite being less experienced. Early tests against Duke (home) and Kansas (away) could make this prediction look silly.

Penn State –Tim Frazier becomes a the team's new Talor Battle, leading the Nittany Lions in points, assists and steals, in addition to being in the mix for the lead in rebounds.

Purdue – Robbie Hummel will avoid another serious injury and play a full season. Hummel, whose injury history is well-documented, hasn't lasted a full season since 2008-09.

Wisconsin – Point guard Jordan Taylor will win Big Ten Player of the Year. Jared Sullinger is everyone's favorite, but Taylor's annual trend of significant improvement (1.6 ppg as frosh, 10 as soph, 18.1 as junior) gives him a great shot at the upset.

Here are some bold predictions I received on Twitter:

@BTNBrentYarina With new found scorers in Spencer & Talley #Nebrasketball starts 2-0 in #B1G and finishes above .500 in league. #boldpredict

@BTNBrentYarina Bold prediction: Northwestern will be dancing….thanks in large part to an upset over Baylor. Non-con is not that soft.