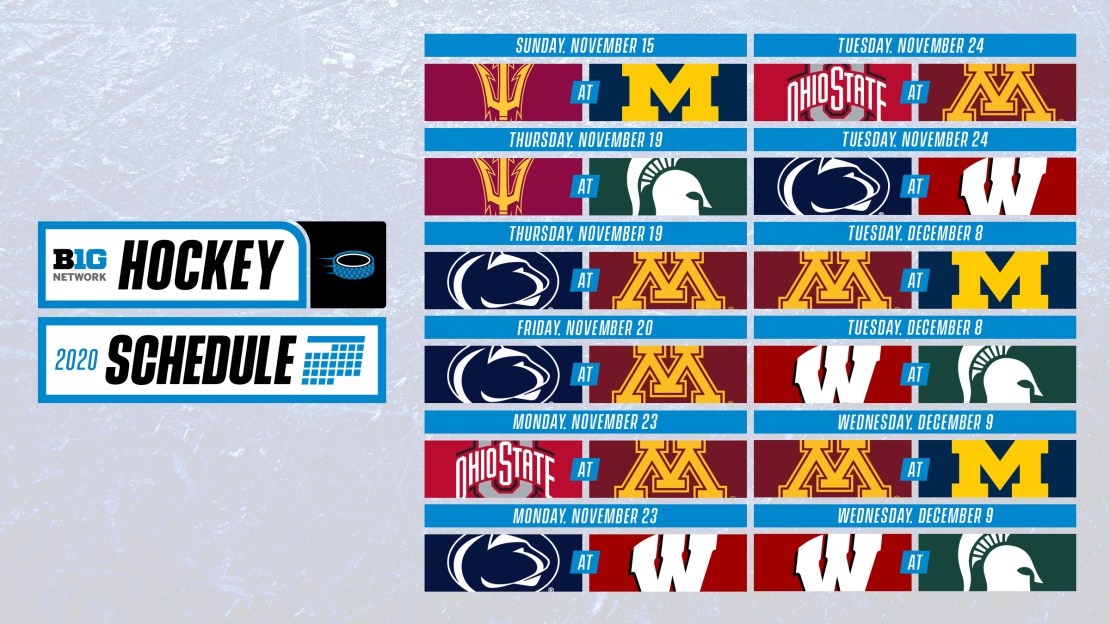 The Big Ten Network today announced its schedule for the first half of the 2020 Big Ten Hockey season, complete with 12 games starting on Sunday, Nov. 15.

Five Big Ten teams are ranked in the preseason edition of the USCHO.com poll, with No. 9 Penn State, No. 10 Ohio State, No. 12 Michigan, No. 14 Minnesota and No. 20 Notre Dame leading the way.

On Friday Nov. 20, the Nittany Lions and Golden Gophers meet again at 4 p.m. ET as part of a Minnesota doubleheader on Big Ten Network. At 7:30 p.m. ET, the Gophers football team welcomes Purdue to TCF Bank Stadium for a Big Ten West showdown.

The Big Ten announced its preseason honors on Monday, in which Minnesota was named as the 2020-21 Big Ten preseason coaches? poll favorite. Michigan was selected second in the preseason poll, with Notre Dame and Ohio State tying for third, Wisconsin taking fifth, Michigan State placing sixth and defending Big Ten Champion Penn State rounding out the poll in seventh.

In the coming weeks, additional games will be assigned to Big Ten Network+, a subscription service for non-televised live events. This season, sport-specific packages are available at a new price point for fans only interested in viewing ice hockey events. For details and subscription information, please visit btnplus.com.

Television scheduling details on the second half of the season will be made available at a later date.