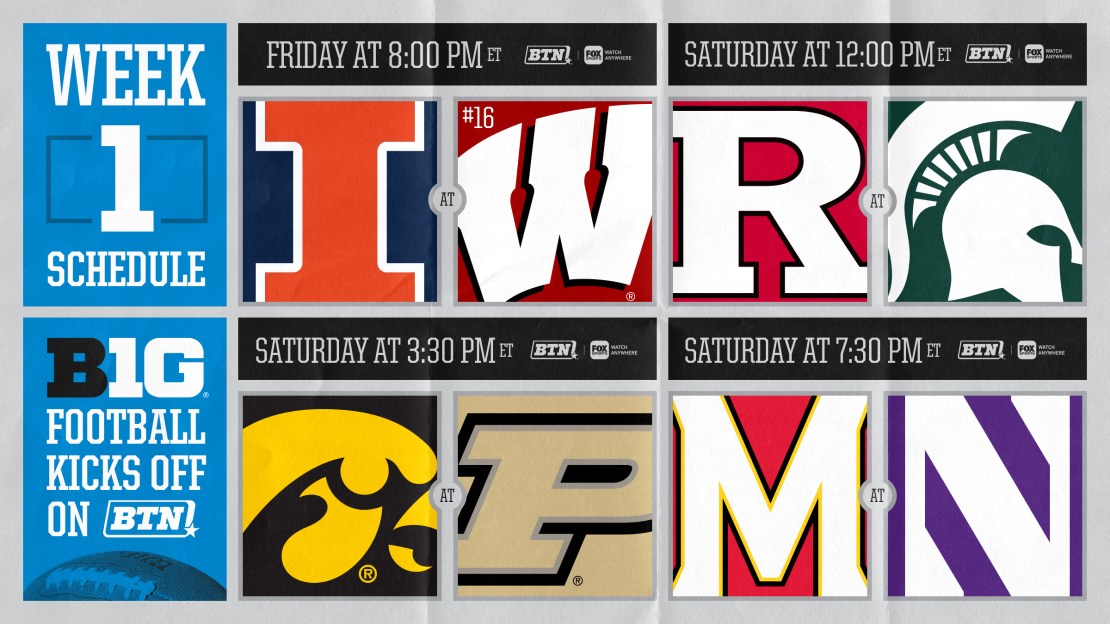 The 2020 Big Ten Football season begins on BTN, with No. 16 Wisconsin vs. Illinois at 8 p.m. ET on Friday, Oct. 23. In addition to a rematch from last season?s Illini victory as time expired, BTN?s week one also includes three games on Saturday. At noon ET, Rutgers vs. Michigan State showcases the debut of Spartans head coach Mel Tucker and the return of Greg Schiano to Rutgers, at 3:30 p.m. ET Iowa and Purdue face off in a showdown in the Big Ten West and at 7:30 p.m. ET Maryland and Northwestern square off in primetime.

Play-by-play announcers Brandon Gaudin, Lisa Byington, Cory Provus and Joe Beninati will be on the call all season long for BTN. They accompany an experienced lineup of Big Ten game analysts including Matt Millen, James Laurinaitis, J Leman and Anthony Herron. Herron, a former standout for the Iowa Hawkeyes, returns to BTN following his previous stint at the network from 2009-2011. Rick Pizzo, Coley Harvey, Elise Menaker, and Olivia Dekker will handle sideline reporting duties throughout the season. BTN?s announce teams will be regionalized and vary throughout the season, and will potentially include additional personalities, based on game selections and locations.

BTN Tailgate kicks off its fifth season ahead of Rutgers at Michigan State on Saturday, Oct. 24. The Saturday pregame home for Big Ten Football fans airs from 10 a.m. ET to noon ET weekly with Dave Revsine, Gerry DiNardo, Howard Griffith and newcomer Joshua Perry and will be based in the Chicago studio this season. Weekly studio coverage, including the B1G Show, B1G Game Break, B1G Football Postgame and The Final Drive, will also originate from Chicago and feature hosts Revsine, Mike Hall and Pizzo, along with DiNardo, Griffith, Perry, Herron, Urban Meyer, Dave Wannstedt, Joel Klatt and Glen Mason.

Week One on BTN