How Iowa is using a stimulating treatment to battle depression: BTN LiveBIG 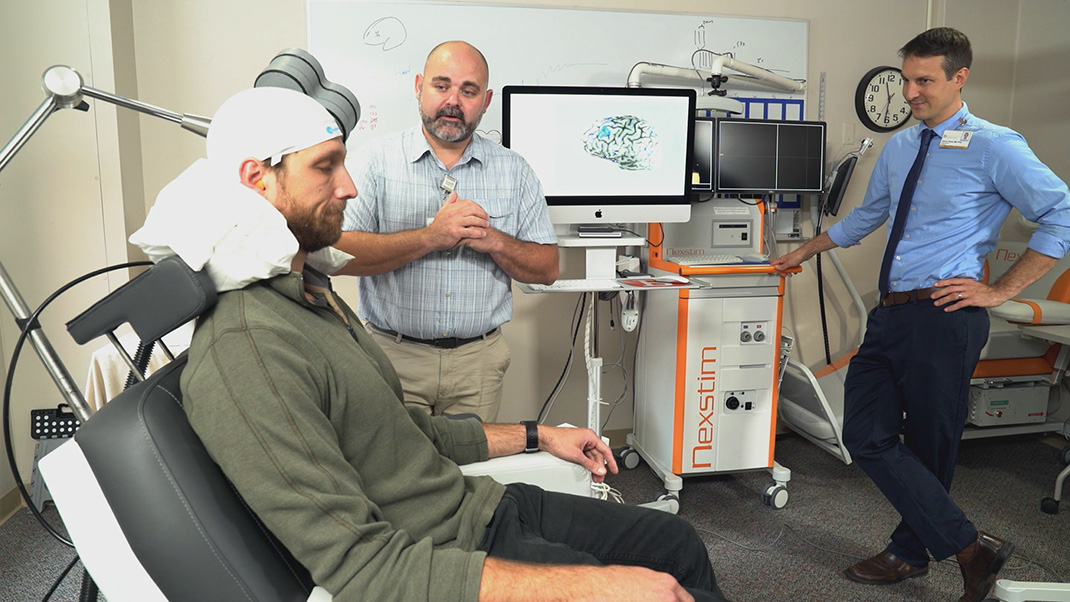 Doctors diagnosed Laura Prince with clinical depression at the age of 14. In addition to cognitive therapy, she received a prescription for then-new antidepressant Prozac. Eventually, though, her depression worsened. Her psychiatrist at the University of Iowa recommended her for a relatively-new procedure being explored at the school?s Department of Neurology, transcranial magnetic stimulation, or TMS.

?TMS is a non-invasive way to stimulate the brain so,? explains Dr. Aaron Boes, a pediatric neurologist at the Iowa Neuroscience Institute. ?It creates a magnetic field and when that magnetic field interacts with your brain, it'll actually induce an electric current. And you can use that to as a therapy to essentially modulate brain activity in the site where you're simulating.?

The idea of brain stimulation has been around since the early 20th century. But it wasn?t until the 1980s that TMS emerged, and only recently its use an approved treatment began.

The name, Boes admits, is a bit misleading, as TMS doesn?t exclusively stimulate the brain. Rather, through a spectrum of frequencies, physicians and researchers can excite and inhibit neural activity.

His work uses TMS to treat major depression that hasn?t responded to treatment with pharmaceuticals. Generally, that means there is reduced activity in the left prefrontal cortex. Boes? team targets that area, gradually increasing its activity to normal levels.

After referral and a psychiatric evaluation, patients receive a tailored regimen of TMS, ranging from around four minutes to 40, five days a week. Much like antidepressants, results take one or more weeks to come about.

?It's been really positive,? Boes says. ?People often quote a rule of thirds: about a third [of patients] will have the best possible response that we could imagine which is a remission of their depression so when they're done with their treatment course, they're no longer meeting criteria for depression. Another third will have what we consider good response; their level of depression will drop by fifty percent or more. Another, third really doesn't respond and we're trying to understand why that is, see if we can make the treatments better, see if we can modify it in some way to somewhat sort of expand the number of people that respond.?

Boes, who received his BS, MD, and PhD from Iowa, credits the collaborative atmosphere at the university with helping to drive his work. Neurologists, neuroscientists, and psychiatrists work free from borders to expand our understanding of the brain and the maladies that plague it.

?We're still understanding how TMS works so there's a lot of room for improvement,? he says. ?We're just trying to understand the mechanisms of TMS: what's going on in the brain when we use TMS and how can we make it more effective over time, how can we expand the number of patients that we're treating with depression, but also how can we apply it to other disorders of the brain, things like autism, schizophrenia, bipolar disorder? They're all brain-based disorders so I think TMS should be able to apply to them. It's just a matter of figuring out how that works.?