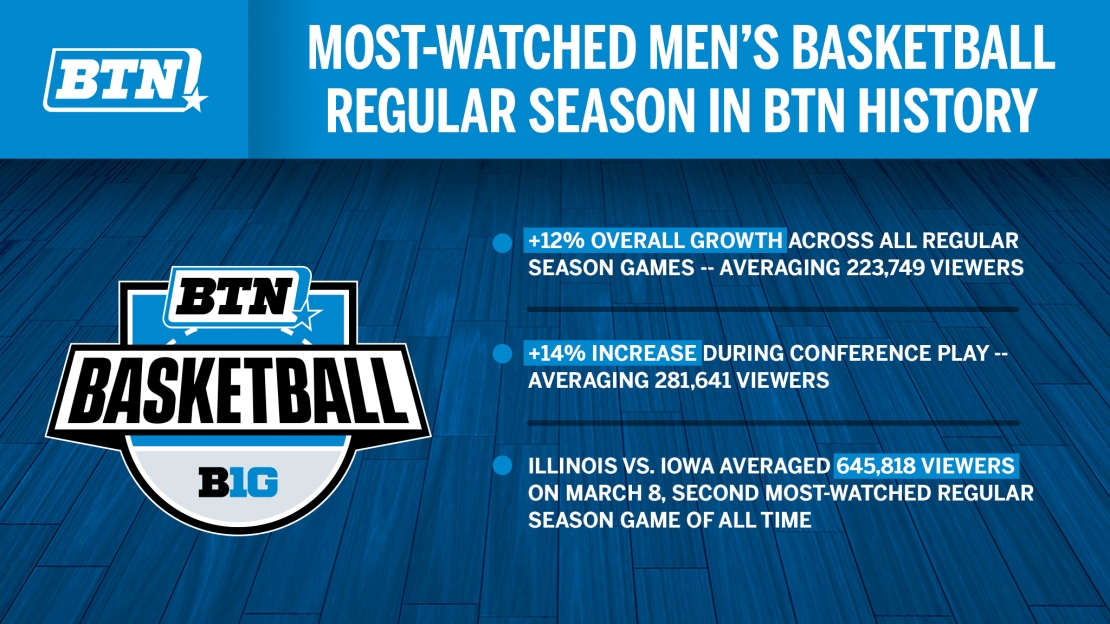 Three of BTN?s top 10 regular season games of all time took place in 2019-20, including the No. 1 and No. 2 games during the first eight days of March. This past Sunday, Illinois vs. Iowa averaged 645,818 viewers, slotting in just behind Minnesota vs. Wisconsin on March 1, which averaged 693,272.

Several Big Ten programs experienced dramatic individual year-over-year growth for conference game broadcasts, including a +51% increase for Illinois, a +47% increase for Indiana, a +43% increase for Maryland, a +34% increase for Penn State, a +30% increase for Rutgers and a +15% increase for Iowa. All six programs are predicted to make the NCAA Tournament according to Fox Sports and BTN?s Mike DeCourcy and NCAA.com and BTN?s Andy Katz. Both analysts also predict a total of 10 Big Ten teams into the field of 68.

BTN?s top 10 games of the 2019-20 regular season, according to Nielsen Media Research, are as follows:

Basketball coverage on BTN continues today with the start of the Big Ten Men?s Basketball Tournament in Indianapolis. Minnesota faces Northwestern at 6 p.m. ET prior to Indiana taking on Nebraska at approximately 8:30 p.m. ET.

All games and studio programming on BTN can be streamed via the web, smartphones, tablets and connected devices through the FOX Sports App.

BTN?s complete tournament schedule is below: