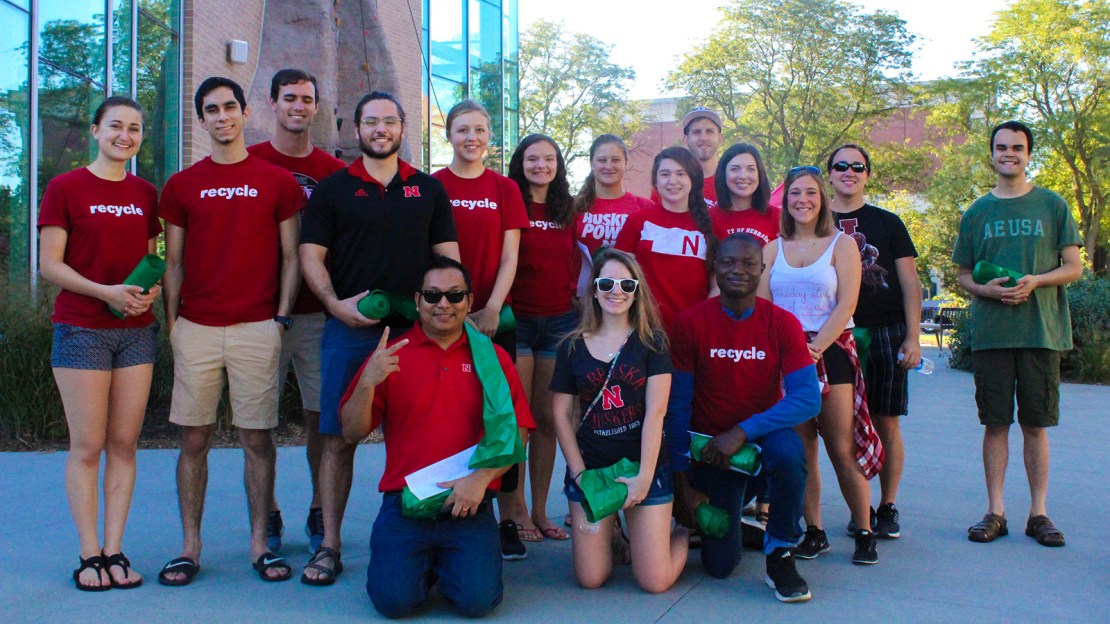 Huskers fans revel in the fall air around Memorial Stadium. Food hits the grill, beverages are poured, merry is made. When game times rolls around, the faithful head into the Sea of Red to watch some serious football. But out among the tailgaters, a different kind of crew scours the lot. They aren't necessarily football fans, though many are. No, these are the volunteers of the Go Green for Big Red program, and they are on the hunt for refuse.

A partnership between UNL Recycling and Recycling Enterprises, for years, the Go Green program has been motivating fans and visitors alike to recycle during University of Nebraska home football games. Clad in red "Recycle" shirts, these volunteers roam the parking lots distributing green bags for fans to fill. They even dive deep in dumpsters and trashcans, harvesting items destined for another life.

Prabhakar Shrestha, who first came to Nebraska as an international graduate student in 2006, is the founder of Go Green for Big Red. He found Husker spirit easy to come by. But, his school spirit exposed him to the messy side of game day.

"When I started to going to the games after 2006, that's when I started seeing how much trash is produced," says Shrestha, now the Director of Sustainability for Nebraska. "A lot of it was something that could easily be diverted away, like glass, cans, which has a value in the market."

Shrestha and a friend launched the Go Green initiative in 2009. By then, Shrestha was the campus recycling coordinator. Programs at over 150 buildings dominated his focus. But his friend encouraged him not to ignore the potential for waste diversion during games.

Shrestha, whose job was part of the department of landscape services, sought support from his superiors. While initially hesitant, they quickly acquiesced when they realized how much a robust recycling program would cut down on the work for the Sunday cleanup crew.

"What we would do is we would hang out a few hours before the kickoff," Shrestha says of the initial efforts. "Our main target are tailgaters. Everybody's having a good time, right? Then we go around the parking lot handing out green bags to all the tailgaters to put their aluminum cans and plastic cans in this green bag. All they have to do is, once it's full, bag it, leave it there. We'll come and get it second round. Then, if they need an extra bag, we'll give them extra bags, also." 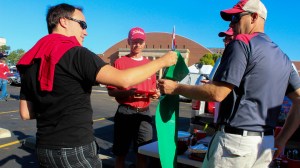 Go Green is an all-volunteer effort that pulls from across campus, from staff to faculty to students. In an effort to attract even more volunteers, Shrestha says that recruitment efforts have shifted from targeting individuals to appealing to groups. By approaching a sorority or an engineering club, Go Green can spread their message to a larger audience, while also tapping into a much deeper well of support.

Shrestha explains that they're also working to incentivize volunteering with donations of refreshments and other items for workers. "We work with local businesses to make sure that our volunteers have food. My envisioning in the future is to make it more tailored, work with Husker athletics even better, and see if we could drop in few more, like maybe a game day ticket, or something like that. Do a raffle or something like that. Make it more fun for those kids to come and then help us more."

What really excites Shrestha, though, is the potential for Go Green to serve as a model for other gameday recycling programs, both large and small. Through trial and error, the group honed their operations, something that Shrestha is confident can be scaled to fit a number of events.

"To be very honest, this is something that we want everyone to do it," Shrestha states. "It's not difficult. We have done it here at a university that is pretty big for the size. I think it's totally doable. We would like to use whatever actions we take on campus so that the students can learn and then use them, themselves, when they become our future leaders or business people."