Michigan is making music with a unique beat: BTN LiveBIG 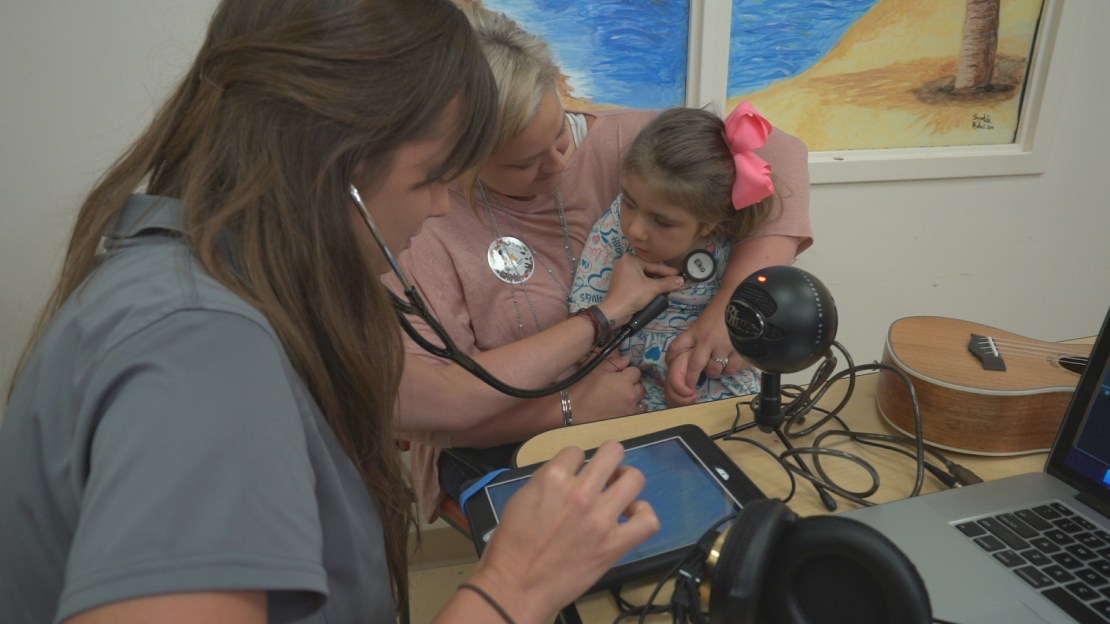 The songs are simple and sweet, and they bring smiles to the faces of five-year-old Gemma Gauger and her family. As they play out, a unique set of rhythmic pulses provide the beat. They are from Gemma?s two hearts: the one she was born with, the one that never fully formed, and her donor heart.

This suite of unique tunes is the product of the Heartbeat Songs program at the University of Michigan?s C.S. Mott Children?s Hospital.

?So, first we capture the heartbeat, and then we insert it into the music technology program on our computer,? explains Susan Smiddy, one of the music therapists at Mott Hospital. ?Then, we engage a family and dialogue about what song is meaningful to them and why. It just gives an opportunity to talk about their child or even the patient is able to express themselves.?

From there, the patient, their family and the music therapist work on choosing an instrumentation for the song and recording it to the beat of their heart. Gemma?s mother, Lindsay Gauger, selected for her daughter ?Landslide? by Fleetwood Mac, a song that has brought joy and strength to the Gauger family through their arduous medical journey.

Three weeks before her birth, the Gaugers found out there was something wrong with Gemma?s heart. She had a condition known as hypoplastic left heart syndrome; basically, she was missing her left ventricle. She had her first open-heart surgery when she was just two days old; her second, when she was six weeks.

Through it all, her mom explains, she was a trooper, despite being fragile. But at eight months, a bout with the common cold led to cardiac arrest. It was soon thereafter the Gauger family learned Gemma would need a heart transplant. During this period of learning and waiting and recovery, they discovered the music therapy program at Mott Hospital.

?Susan started coming into her room and she would ask what Gemma's favorite songs were, what kind of music she enjoyed, and she would sit there and play her guitar and just, you know, give Gemma 20 to 30 minutes of her time just playing and singing to her, and bringing instruments in to try and get her to play and interact,? says Lindsay.

Far broader than just the Heartbeat Songs program, music therapy at Mott Hospital - and other University of Michigan hospitals - provides patients with an important release for their emotions and from the monotony.

In a children?s hospital, that is all brought into sharp relief, explains Smiddy. ?As you can imagine, the hospital is a very scary atmosphere for children. A lot of unknowns, a lot of pain, a lot of fear and a lot not only going on with them physically, but emotionally as well. So, music therapy is wonderful in that we're able to distract them from the pain that they're going through, normalize the environment, bring in their favorite songs. We help them express themselves, we write songs and help them sing. I've seen their whole entire physical, like their facial expressions just change when they're engaging in music therapy and not only just for the children but their entire family. It allows them to escape from the environment that they're in.?

Four years after Gemma received her donor heart, the Gaugers returned to Mott Hospital to interlace its rhythm into The Beatles? ?Here Comes the Sun.? It was, says Lindsay, the first song that brought a smile to Gemma?s face as she waited for her transplant, and now it forms the coda to a piece of their lives marked by fear and sadness, but also hope and triumph. Through it all, the dedicated team of music therapists were there to nurture that hope, to proffer comfort, and to pay tribute to those triumphs.

?The whole process of the music with the kids, is just such a gateway to being able to maybe forget that you're sitting in a hospital room,? says Lindsay. ?Using that music to just kind of let go of the surroundings and just be in that moment with your child is really important, because every single day is a gift, and you don't know what the next day is going to bring. That's really where we've been at for four years, is just every day she wakes up is another gift. It's another moment. It's another day to enjoy it. Music is just an easy way to absorb that time and that small piece with your child and just take it in.?