Behind the impact of the Iowa Wave: BTN LiveBIG 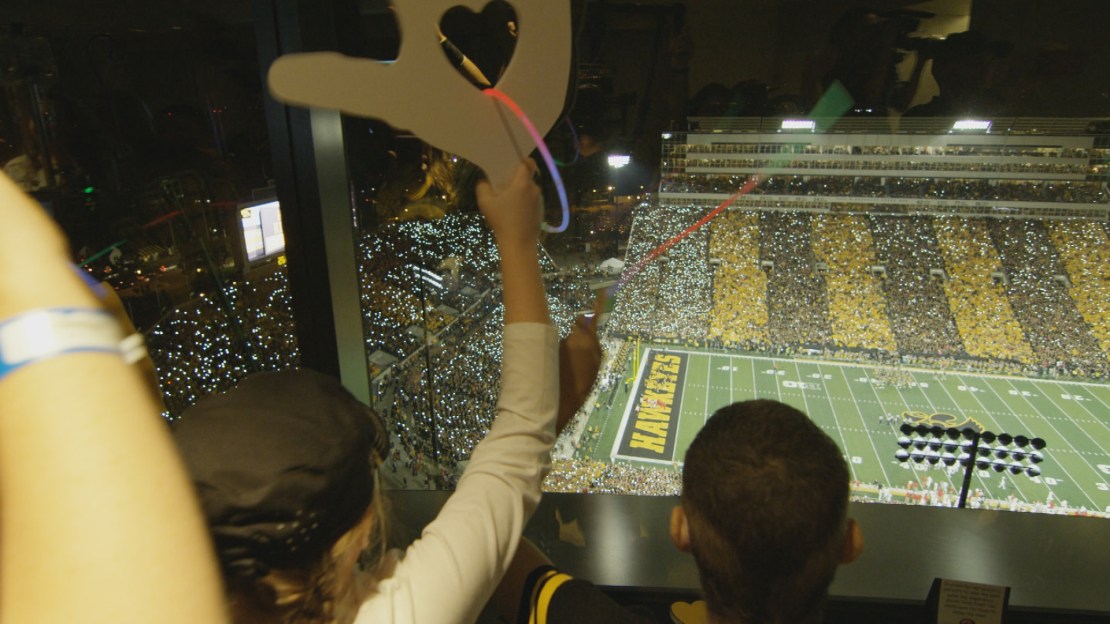 What more can be said about the University of Iowa Wave? It has already been called the ?Greatest New Tradition in College Sports.? It has been covered by major media outlets big and small, from Fox Sports to the Iowa City Press-Citizen. A Hawkeyes football player has written a song about it, and the grounds crew at Kinnick Stadium has even kept the tradition going in the winter, shoveling a giant waving hand into the snow.

If you?re one of the few who haven?t heard about the Wave, let us catch you up to speed. Prior to the 2017 football season, a new building was completed for the UI Stead Family Children?s Hospital. This new building overlooks Kinnick Stadium and features a ?Press Box? with a bay of windows from which patients and their families can cheer on the Hawkeyes.

Not wanting the children to miss out on the palpable energy in the stadium, a fan suggested on social media that the university come up with a way to acknowledge them. So, at the conclusion of the first quarter of the first 2017 home game, the stadium announcer asked all in attendance to turn and wave to those in the hospital. A tradition was born.

But, to truly measure the impact of the Iowa Wave, one doesn?t need to look for how many times it has been viewed on YouTube or shared on Facebook or covered in the news. The true measure is in the patients and the families connected by a gesture.

Brittany Raue knows the ins and outs of the Stead all too well. When her son Isaac was injured in a house fire, it was to the hospital?s burn unit he was spirited. Initially, during his long journey of recovery, Raue thought that the hospital was the last place he?d want to be. But she says that the community of caring they have found there has made the Stead one of Isaac?s favorites.

?The whole environment up here is fun for them,? says Raue. ?There?s other kids up here. Lots of times when you?re in the hospital you don?t see a lot of other kids. There are activities that they get to do, but [The Wave] draws the most amount of kids and family of the kids. When the music starts to play and everybody turns around and is waving, they realize, you know, that?s for us.?

That warmth isn?t contained to just Hawkeyes fans and players either. Visiting teams and fans join in the Wave, and more than a few universities have even recorded special messages to bolster the message of support for the young patients. But Raue notes that the welcoming, comforting and supportive spirit starts the minute you arrive at the Stead.

?One of [Isaac?s] nurses told me, you know, right away that we?re gonna become family,? she remembers. ?I?m thinking, hmm, no, like we?re gonna get outta here and we?re gonna move on. Like they just become your family and some days I think he?d rather be here than anywhere because he?s just bonded so much with them and they take good care of him, like he?s their own child, it?s amazing.?

While the initial ballyhoo of the Iowa Wave may have died down a bit, its simple, yet profound impact has not. It continues, as it hopefully will for seasons and generations to come, as a reminder that, despite the thrill of victory and the agony of defeat, there are those who need and welcome the strength of community to help overcome the greatest struggle they?ve ever faced.