Why Brutus the Buckeye is biking to beat cancer: BTN LiveBIG 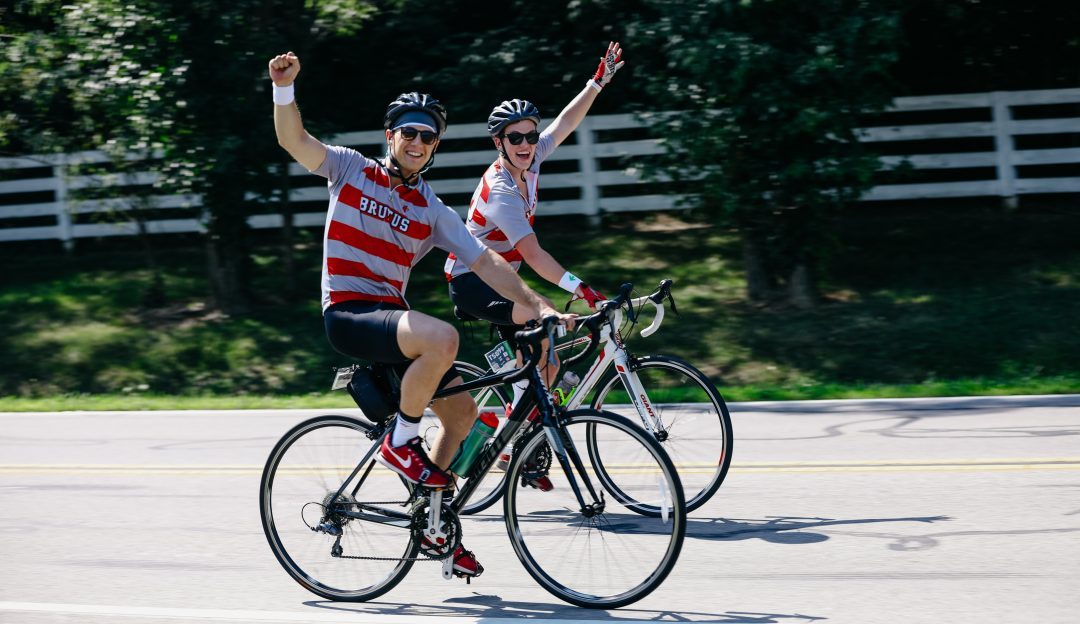 Gabe Gemberling was on top of the world. Until he wasn?t. The Ohio State University graduate?s roller coaster ride took him from being on the field for some amazing Buckeyes football wins to a hospital bed, battling an aggressive form of cancer. And now it gives him the opportunity to give back in ways he never thought possible.

Gemberling saw perhaps the highest of highs during his time at Ohio State, crowd surfing over students during his time as Brutus the Buckeye mascot. And just like that, he felt the lows of getting diagnosed with cancer, turning his world upside down.

But from that came a lifelong friend, as well as an opportunity to give back - to the tune over more than $42,000 raised with the Pelotonia bike ride and the chance to help expand the hospital that treated him.

?It?s really comical, when you sit down and think about the ends connecting,? Gemberling says. ?It?s a pretty odd story and I?m happy to share it with everyone. Hopefully someone will read my story and have more hope.?

OK, let?s start at the beginning, which was really just a few years ago. As a student at Ohio State, Gemberling had a chance meeting Jeremy Hitchens, who had already served as the Buckeyes mascot, Brutus. Both of their girlfriends - amazingly each named Lexi - were members of the cheerleading team. After much discussion, Hitchens encouraged Gemberling to try out for Brutus.

It was something Gemberling had always thought about doing, but never seriously considered. Growing up in Ohio, he had always been a Buckeyes fan. But to be the mascot? It didn?t seem like reality.

?I gave him some tips and tricks, tried to steer him in the right direction,? Hitchens says of the mascot tryout. Well, actually he did a little bit more than that. ?I was on the board. In my unbiased opinion, he was the best candidate. I helped vote him on the team. The rest is history.?

That history took him on the aforementioned crowd surf - after a big win over Penn State - and a trip to the Big Ten Championship game in Indianapolis.

?It was a surreal moment for a guy who grew up as an OSU fan,? Gemberling recalls. ?I had autographs of Brutus when I was a kid.?

He was living the dream ? until he started to feel a horrible pain in his shoulder. After going through some tests and an MRI, he found himself at the Ohio State University Comprehensive Cancer Center - Arthur G. James Cancer Hospital and Richard J. Solove Research Institute. Or, as it?s known to patients and doctors, The James. That?s where he got the news: osteosarcoma, a malignant cancerous tumor that starts in the bone and is most commonly found among adolescents and young adults.

?It?s hard to describe still,? he says. ?It?s weird. You know when you look out at the side of a mountain or the Grand Canyon, it?s hard for your eyes to process what you?re looking at? It was kind of like that. Kind of a blank stare. Absolute shock.

Surgery was scheduled. And then another. Doctors thought they would have to amputate his arm. Amazingly, they were able to avoid that extreme measure, but he did end up with about five inches of bone removed and a 12-inch plate down his arm. It was shredded: A detached pectoral muscle, biceps and shoulder, along with about 250 stitches.

?As Brutus, we would devote two hours [to visiting patients in the hospital] every Sunday,? he says. ?I woke up in the same exact room as one of the patients I used to visit. It?s a tough pill to swallow. Not where I imagined I?d be at [age] 21.?

But Gemberling persevered. He went through physical therapy. He got his strength back. Last November, before the game against arch-rival Michigan, his cheer coach called him to the stadium. They showed him a video on the scoreboard of all his friends and family telling him they loved him.

?I turned around and my whole family was there,? he says. ?All the doctors, nurses, everyone. I just lost my mind and started bawling my eyes out. My entire support system was in place. I still don?t think I deserve to have that support, but I?m so thankful for it.?

Then the coach asked him a pretty big question: Did he want to suit up as Brutus and lead the team onto the field against arch-rival Michigan the next day? The answer was a resounding yes.

?It was awesome,? he says. ?Going from eight or nine months before that to this. I still don?t know how they cleared it with my doctors.?

Gemberling said it was the first time he really felt like himself since the diagnosis.

?I had gone through so much, but nobody really knew,? he says. ?All you strive for is normalcy. You want everything back to normal. And that was the first time I really felt normal again.?

While Gemberling was busy battling - and conquering - his cancer, Hitchens got some unbelievable news: He was diagnosed with rhabdomyosarcoma, a similar, and similarly rare, cancer.

This one was bad. It became a grapefruit-sized tumor that more or less wrapped itself around his spine. Intense chemo treatments came. Hitchens would have five straight days of in-patient treatment, take time for his body to recover, then go right back into treatment.

?I would just get hammered,? Hitchens says. ?I would get 14 days to recover and then hammer me again. Looking back, I didn?t think it was too tough. Just taking every day as it came.?

But Gemberling was there for him the entire time, because of course he was.

?Gabe was instrumental in my journey, since he?d already gone through the process,? Hitchens says. ?We like to joke that he?s my cancer coach.?

You might think the pair had their hands full, and would be focused solely on their own health. But that?s not how either of them live.

A friend?s mother put Gemberling in touch with Doug Ulman. He is the President and CEO of Pelotonia, a bike ride in Ohio that raises money for cancer research at The James. The two hit it off immediately and Gemberling set about plans to create a team of riders.

Ulman, a cancer survivor himself who had worked with the Lance Armstrong Foundation, vividly recalls his original conversation with Gemberling.

?I just immediately said, ?Hey, let?s get together,?? Ulman says. ?It?s like, holy cow, where did this young man?s energy and zest for life come from? We talked about his career because he was deciding what to do. I said, ?You are not going to have a problem finding a job. Do what you want to do.? He shared his story that day and we immediately became friends. I can?t say enough good things about him.?

Next thing you know, Gemberling put together a team of riders made up of former Brutus mascots and cheer team members. Most of them took part in the 100-mile ride this past August, others fundraising as ?virtual riders.? Hitchens rode with the team, just days after a chemo treatment.

?They all stuck with me up until the 60-mile mark,? Hitchens says. ?I finished about an hour after them.? Everyone was there when he finished. Many tears of joy were shed. ?Such a surreal moment crossing the finish line and having them waiting for me,? Hitchens recalls.

Their team raised more than $42,000. The Pelotonia event went over the $23 million mark. That?s a lot of good that can be done.

While neither Gemberling or Hitchens are completely out of the water - their cancers are notorious for returning - they are both thriving.

After graduating in May, Gemberling took a job as an engineer with Turner Construction, the company that built The James. They are now working on a billion-dollar expansion, which he is a part of.

?The whole reason I took a job with them is they built the James,? he says. ?It?s everything I ever asked for.?

Hitchens starts training with American Airlines early next year, following in his father?s footsteps as an airline pilot.

The sheer improbability of Hitchens and Gemberling?s situations are not lost on them. They know how amazing it is - both of these Brutus mascots - to contract these rare cancers and live to tell the tale.

?It?s pretty crazy,? Hitchens says. ?We talk about the statistical probability of this happening. You couldn?t write a better movie.?

But you also get the feeling that both of them are just getting started. They have support systems in place for themselves, and hope to be inspirations to others.

?I sincerely think he and I were given this for a reason, hopefully so someone else doesn?t have to go through it,? Hitchens says. ?There?s only one way to handle it, and that?s to face it with joy and hope, and not despair.?

They are already planning for next August?s Pelotonia, no doubt ready to break their fundraising mark from this past year.

?Everyone is impacted by cancer, but we can all do something to make it better,? Gemberling says.