How Illinois scientists are perfecting the analysis of past climate change: BTN LiveBIG 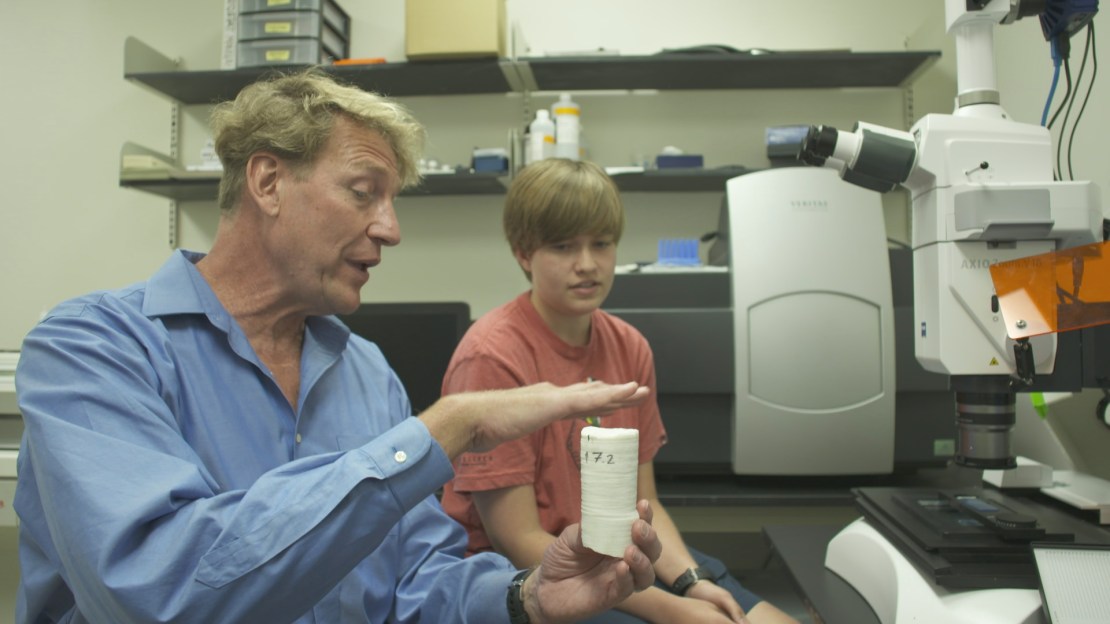 What are the needs of life on earth? Water, food, oxygen; certainly, all of these things, but what about rock?

It?s not the first thing that springs to mind, but for billions of years, life on earth, at every stage, has require minerals to develop. And, so too has life given rise to rock-like formations.

Beneath the surface of the Earth?s oceans, massive coral reefs are built by colonies of stony coral polyps held together by ever-growing calcium carbonate, or limestone, skeletons. These large structures are home to some of the most diverse ecosystems on the planet and have existed for hundreds of millions of years.

Over those millions of years, coral reefs have borne witness to the epic changes our planet has gone through. Within their skeletons lies a record of those changes that could help climate scientists understand more about the frequency and intensity with which those changes have waxed and waned over the millennia.

?One of the most profound questions facing humanity on modern day earth is how will the climate change in the future,? explains Bruce Fouke, professor in the departments of geology and microbiology at the University of Illinois at Urbana-Champaign. ?One of our best ways to do that is to understand how climate has changed in the past. By analyzing the rock record for climate changes, then we can fine tune, adapt and actually focus models and predictions of how climates will change in the future. One of the best repositories or record books of ancient climate change turns out to be coral skeletons.?

By using X-ray imaging, researchers can analyze the alternating high- and low-density isotope concentrations in the layers that coral form throughout their lives. Much like analyzing the rings of a tree, says Fouke, these layers give a year-by-year accounting of the state of the planet. Information as detailed as the temperature of the ocean, how it was circulating at the time and how much CO2 it held can be gleaned from the coral skeletons.

But a problem with the accuracy of the information contained in the coral arises from the very environment in which the colonies reside.

?As the skeletons sit on the sea floor, they actually chemically react with the ocean sea water,? says Fouke, who is also a research professor at the Carl R. Woese Institute for Genomic Biology (IGB) at Illinois. ?And those chemical reactions can change the coral skeleton. It can make the chemistry a little different. It can make the density of each of the layers a little bit different. And, in the end, it can cause the coral skeleton to be slightly altered.?

In an effort to properly interpret the historical climate data, Fouke led a team of researchers in the creation of a new set of data corrections for coral analysis. They used a variety of microscopy techniques, including electron, laser and X-ray imaging, to discern the difference between actual deposited coral skeleton and diagenetic aragonite, a substance created by the reaction with seawater.

This data was combined with known chemical-mixing models for the most abundant isotopes found in coral reefs, strontium and oxygen, to create a stable correction factor for coral skeleton analysis.

Extrapolating out a history for global climate change based on this analysis, along with the information stored in tree rings, ice sheet core samples and cave deposits, is invaluable to those looking to more accurately predict how future change may play out. It is also indicative of the growing recognition of the ways in which all life and planetary functions are interconnected.

"One of the most exciting parts of science right now is the idea of integration,? Fouke explains. ?All things on planet Earth are connected. That connectivity is essential and key to us making wise and accurate predictions of what the future holds. It's also necessary for us to understand how to harness energy, how to preserve the environment, how to do space exploration, how to improve human medicine. All those require the integration of different fields. So here at the University of Illinois in Urbana-Champaign, we've built the Carl R. Woese Institute for Genomic Biology. It's an entire research facility that's dedicated to the interaction of all aspects of human endeavor: science, the arts, literature, politics, all these are blended together. In fact, the motto of the Institute for Genomic Biology is where science meets society.?