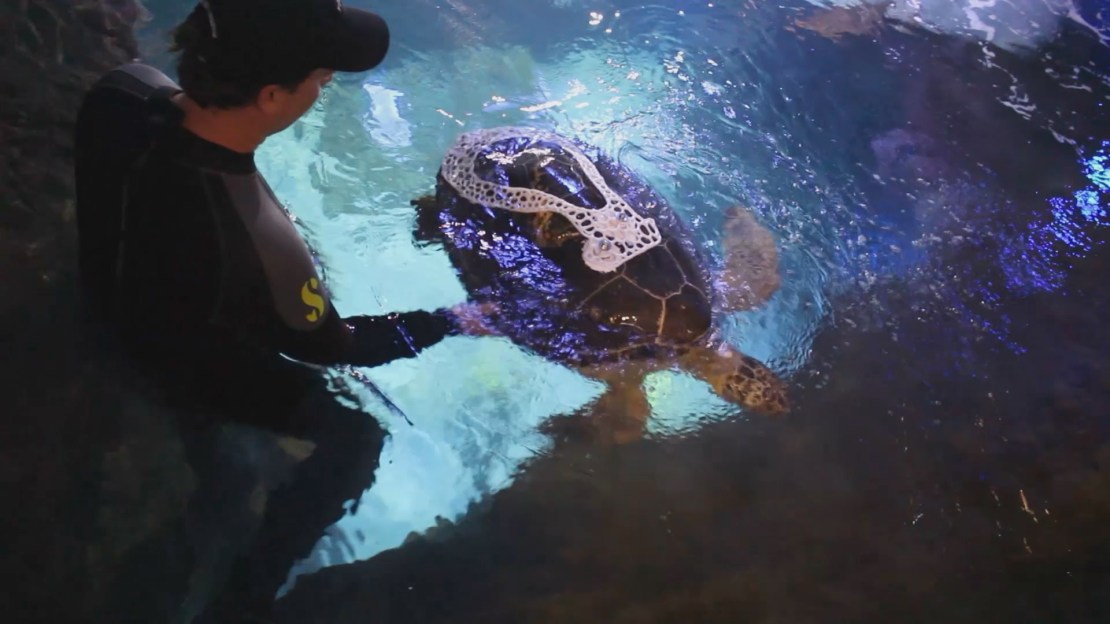 Coming to the University of Minnesota to study aerospace engineering, recent alum Thomas Skahen didn?t foresee himself standing by a massive aquarium at Sea Life Minnesota, beaming with pride as a large green sea turtle swims by.

?I really never expected to work on anything like this, but this project, it?s just been so incredibly fulfilling to perform this work, to see it out in the field. To see it work, nothing beats that,? says Skahen.

The project he?s so proud of concerns Seemore, a sea turtle who has a serious problem with a less-than serious sounding name.

?In about 2009, she was hit by a boat,? say Traner Knott, an aquarist at Sea Life. ?It broke her shell and also caused spinal damage. Because of the spinal damage, she suffers from a condition called Bubble Butt Syndrome. This is where the turtle no longer can expel gas out of the lower intestine, so she floats, kind of butt up and head down.?

In the wild, this impairs the turtle?s ability to flee from predators, evade fast-moving boats and chase down food. That?s why turtles like Seemore, when found in the wild, are brought to aquariums.

The standard treatment for Bubble Butt Syndrome is to attach counterbalance weights to the shell using strong marine epoxy. But this is a cumbersome and impermanent remedy to a lifelong problem, and can lead to shell damage and stress for the turtle. So, Knott set out to devise a new treatment.

?I came up with a plan to utilize 3D printing,? Knott explains. ?My boss really liked the idea. Unfortunately, I know nothing about 3D printing, so we had to look into the community and find who did have this kind of technology and level of know-how.?

A search led Knott to the College of Science and Engineering at the University of Minnesota. There, he found a robust program well-versed in custom-printing precision items ranging from those used in aerospace applications to prototypes of biomedical devices.

?The design team at the university was great,? says Knott. ?This is right in their wheelhouse, but it?s also something a little different for them. They were very eager to donate their time.?

Guided by Knott, the Minnesota engineering team set about understanding the peculiarities of the task at hand. Chief among them was the unique shell structure they had to work with.

?The one thing about working with turtles is there aren?t very many right angles,? Skahen notes. ?There?s lots of intuition that goes into designing with Seemore. It was very hands-on and there was a craftsman kind of quality to it.?

Using laser scans of the shell surface, the team worked through roughly 30 proposals before settling on an exo-shell design. This printed piece is attached to a semi-permanent central mount on Seemore?s shell using Velcro, meaning adjustments can be made without the need to remove Seemore fully from her tank and laboriously detach several epoxied pieces. The exo-shell can simply be pulled off, fitted with weights in the proper locations and reattached.

?This new shell provides an easy method of attaching new weights,? Skahen explains. ?We don?t have to pin her down out of the water every time we need to move a weight. It reduces some of that irritation. We don?t see the flaking from the constant ripping off of these really strong epoxy weights. And, it allows for more fine-tune placement. You can experiment and just dial it in correctly to make sure she floats perfect every time.?

Knott says that Sea Life?s partnership with Minnesota is part of a growing trend of partnership between zoos and aquariums and engineering and design professional in order to tackle serious challenges in animal care.

?This collaboration with the University of Minnesota made something possible that wasn?t possible before,? says Knott. ?I can take care of turtles and I can see what their needs are, but I can?t necessarily meet the needs. The design team and the engineering students at the [university] can meet those needs, but they don?t work with turtles every day.?

For Skahen, the entire process has been a labor of love for one very deserving turtle.

?With nothing but a little bit of chutzpah, a little bit of elbow grease and some good direction, we made something from nothing,? Skahen remarks. ?This shell exists because we wanted it to and we worked with some people who really wanted to help us make that happen. To have helped another living thing like that, it really was just incredible.?