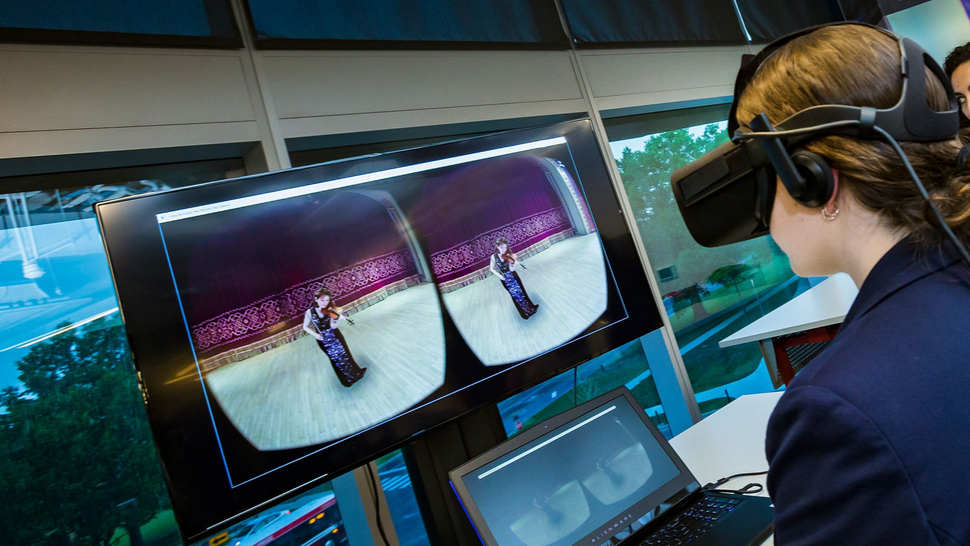 Concert violinist Irina Muresanu is steeped in classical tradition. She has performed in venues the world over. She has been accompanied by the Boston Pops and the Romanian National Orchestra. When she plays, it is with an 1849 Giuseppe Rocca violin and an Étienne Pajeot bow.

Yet now, with the help of some colleagues at the University of Maryland's Maryland Blended Reality Center, Muresanu is working to reimagine how classical music is seen, heard and taught through the use of virtual reality.

Muresanu, who also works as an associate professor in the university's School of Music, teamed up with Amitabh Varshney, a professor and dean of the university's College of Computer, Mathematical and Natural Sciences, to create a new type of concert experience.

The collaboration is called Four Strings Around the {Virtual} World, an adaptation of Muresanu's concert with a similar title. As Muresanu plays pieces native to a specific location, viewers see a virtual version of that very place, allowing them to both see and hear where music really comes from.

"In short, Four Strings Around the World is work inspired by the folk music all around the world," Muresanu said. "And the composers that wrote these works are from four different continents – I'm working on a fifth one. It's a living, breathing project, because I continue to add works to this project."

Right now, the concert covers music from four continents – Europe, Asia, North America and South America. The VR experience not only takes fans of the music to the settings they were originally composed in, but it also allows for a greater understanding of how classical music is created. With visuals changing every 30 seconds, one can feel like they are in a concert hall in Romania or the National Arboretum in Washington D.C., even though they nor Muresanu herself is actually in those locations.

"My research group had already worked on a project with the Maryland Opera Studio that placed the audience onstage with the performers," Varshney said. "Now, working with Irina and her Four Strings project, we had the opportunity to virtually place both the performer and the audience around the world."

Varshney further explains that the work his team has done with Muresanu has led to new avenues of use for VR technology, such as creating a 3D immersive experience that can be used to train emergency physicians. "We felt if we could perfect the technology working with Irina, that is, very accurately capturing her intricate hand and bow arm movements, then we could transfer that same level of accuracy to capturing a complex surgical procedure."

The ability to change how classical music is taught appealed to Muresanu. Because of the way the project is being captured, a person interested in learning how to properly play the violin or how Eastern European music differentiates from American can see that up-close. For years, the best way to understand the ancient pieces written by classical composers was to listen. Now, using the technology being developed and utilized at Maryland, students can study hand placement and see things that a person who was just hearing the music would never be able to take in.

The next step for the research is raising money to put on a 360-degree concert, so that every angle of Muresanu's Four Strings Around the World performance can be captured. In the next six months, the team is optimistic they will have raised enough awareness about their work to be able to do that. People have already taken notice. A video showing the VR performance went viral, so much so that the University of Maryland decided to share the video on the front page of its website and the School of Music shared it with incoming students on the first day of school this fall.

"At the end of the day, art is what attracts people. Art does sell," Muresanu said "It was really a no-brainer to work with a virtual reality team that was interested in this project. And I as an artist always like to transcend the physical stage, and we have all the components and we do have the chance to create something that has never been done before."