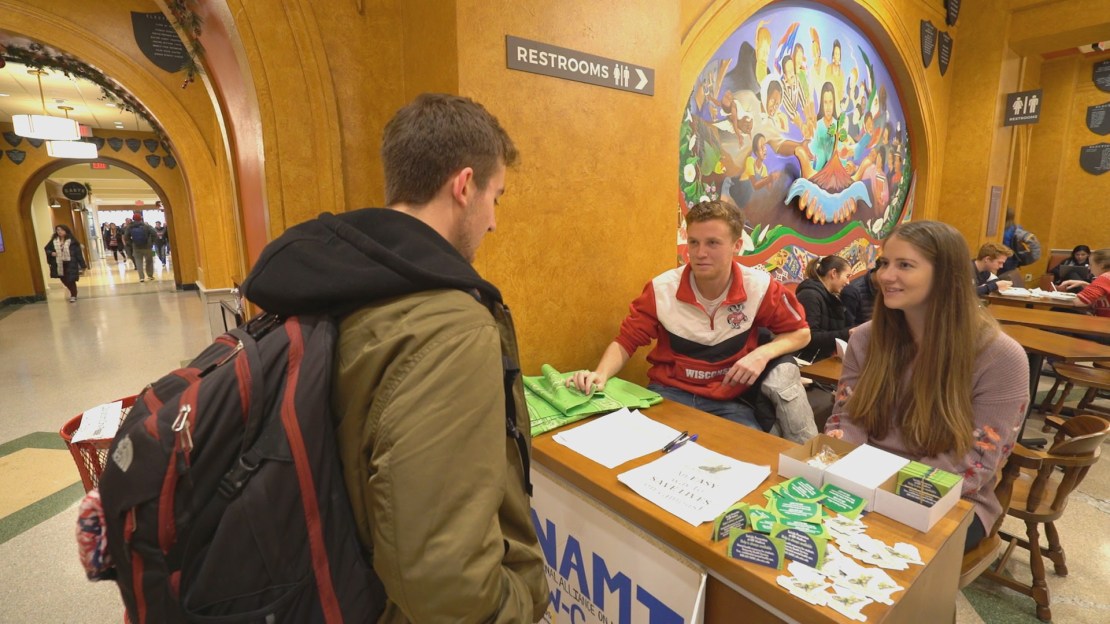 Across the campus of the University of Wisconsin-Madison, simple, yet powerful symbols of hope and help can be found. They?re in dining halls and dorms, classrooms and labs, sports facilities and student unions.

Lime green bandanas, tied to the backpacks of students, faculty and staff, represent that the wearer is carrying mental health awareness and suicide prevention resource cards, and it?s all thanks to The Bandana Project.

?Our goal is that people know that that person is a source of support,? says Conlin Bass, who founded the project while a student in at Wisconsin in 2016. ?They have the resource cards and, in turn, that person is willing to talk, at least at surface level, give them a resource card and just how support that way.?

The issue of mental health awareness and suicide prevention is one that hits close to home for Bass. While still in high school, he lost both his uncle and a close friend to suicide. When he arrived at Wisconsin, he discovered the campus chapter of the National Alliance on Mental Illness (NAMI), ?an organization dedicated to promoting mental health and fighting the stigma against mental illness through education, advocacy and support.?

After hearing from a friend about a UW-Stout professor whose students wore white ribbons on their person as a show of solidarity after the professor?s son fell victim to suicide, Bass had an epiphany.

The cards contain a multitude of information for those who are in crisis or know someone who is. There are local and national numbers for support hotlines, as well as text-based support services. A script is provided to help navigate a 911 call for a mental health emergency in order to give the most pertinent information to the dispatcher in the most efficient manner. 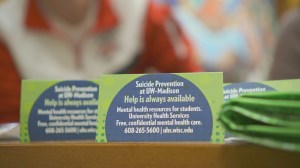 Additionally, there?s a list of phrase people can use when speaking with someone in crisis. As the cloud of stigma surrounding issues of mental illness makes many uncomfortable expressing their distress in a clear fashion, these prompts can help the cardholder triage the situation.

?It?s really important to have the resources out there,? says Caitlin Behm, a past NAMI co-president and Wisconsin senior who helped Bass launch The Bandana Project. ?The stigma is huge. A lot of people are scared to find help or even talk about it with their friends.?

According to the American College Health Association, suicide is the second highest cause of death among college students, and a 2018 study by Brigham and Women?s Hospital found that close to 1 in 5 college students have experienced suicidal ideation.

?Mental health, in general, is kind of a pressure point on college campuses,? notes Bass. ?It?s a time of transition and growth. Lots of people struggle with moving away from home. It?s a tumultuous time.?

Since launching in 2016, the project has distributed over 3,700 bandanas around campus, and in the 2018 school year, roughly 10 percent of the participants were asked for a resource card. Although Bass has graduated, the project remains active as a new generation of Bandana ambassadors continue the mission of education, advocacy and support.

?No one lives a life unaffected by mental illness, in some way or another,? says Bass.  ?Every time you see a bandana on campus, that is a person that cares, someone that is looking out for other people. And, I think that?s a really awesome thing to see every day.?