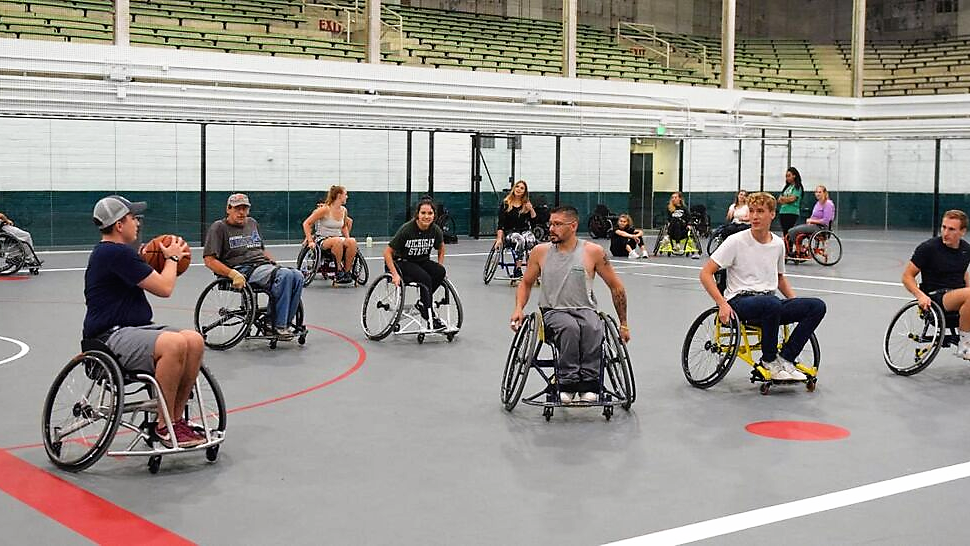 When administrators at Michigan State decided to renovate Demonstration Hall a few years ago, they did so with a clear vision to make it more accessible for students with disabilities.

The building, constructed in 1928, had classrooms, meeting spaces and offices, as well as an ice rink. But due to its age, Demonstration Hall wasn?t especially welcoming to visitors in wheelchairs.

To remedy the issue, the administrators turned to Piotr Pasik, the program director for MSU?s Adaptive Sports and Recreation Club. Pasik, who holds both undergraduate and master?s degrees from the university, created the club in 2013.

He and other members of the club worked with the planners to help renovate Demonstration Hall so that it suits exactly what disabled athletes need. And now he is loving the results.

?If you told me five year ago that this where we?d be at today, I?m not sure I?d have believed you,? said Pasik, who was born with cerebral palsy. ?That?s not to say I didn?t have high hopes, or I didn?t believe in the work that I was doing. But what we?ve done here on our campus in East Lansing in terms of improving for students with disabilities and providing quality adaptive physical activity options is really second-to-none in terms of our recreational wheelchair sports program.?

Pasik realized that Michigan State lacked opportunities for wheelchair athletics when he was in undergrad. That led to the launch of the club, which involved not only MSU students but also other disabled players in the East Lansing Community.

Eventually space became an issue, which is why Pasik and his fellow club members were instrumental in the refurbishing of Demonstration Hall.

Instead of an ice rink, the updated version of the building has a new floor with lines for three sports - wheelchair rugby, power wheelchair hockey and sled hockey. According to Pasik, no other venue in the country has a space where any of those three sports can be played without adjusting the court or needing tape to draw lines.

The hall also has extra wide doors on the benches for players with wheelchairs and clear boards for visitors in wheelchairs to see the action through. There is no drop off from the bench to the court, making it easy for anyone to jump into the action and play. And, there is plenty of on-sight storage for the bulky equipment many wheelchair sports require, which Pasik said ?is really beneficial to running and growing a program.?

?None of this would really be possible without our university and our institution and the investment into inclusion for students and individuals with disabilities on campus,? Pasik said. ?They cleared out an old rink and installed a brand-new adaptive sports rink with a lot of different accessibility functions that really focus on universal design.?

Pasik believes the building will not only create opportunities for people with disabilities, but for the entire Michigan State community. When a team doesn?t have enough players to suit up for a certain game, instead of canceling and depriving everyone on both sides the opportunity to play, the Adaptive Sports and Recreation Club suggests bringing in able-bodied players and having them take a side. The strategy increases awareness for the sport and conversation between players.

?Disability is one of those things in society that?s still very awkward,? Pasik said. ?It has a very negative connotation and people don?t really know how to approach it. But if we use sports as a vessel for inclusion, and then you integrate people with and without disabilities together, then all those social barriers come down. And these volunteers enter their future careers and they are so much better at interacting with people with disabilities.?

?When you invest in inclusion, good things happen.?