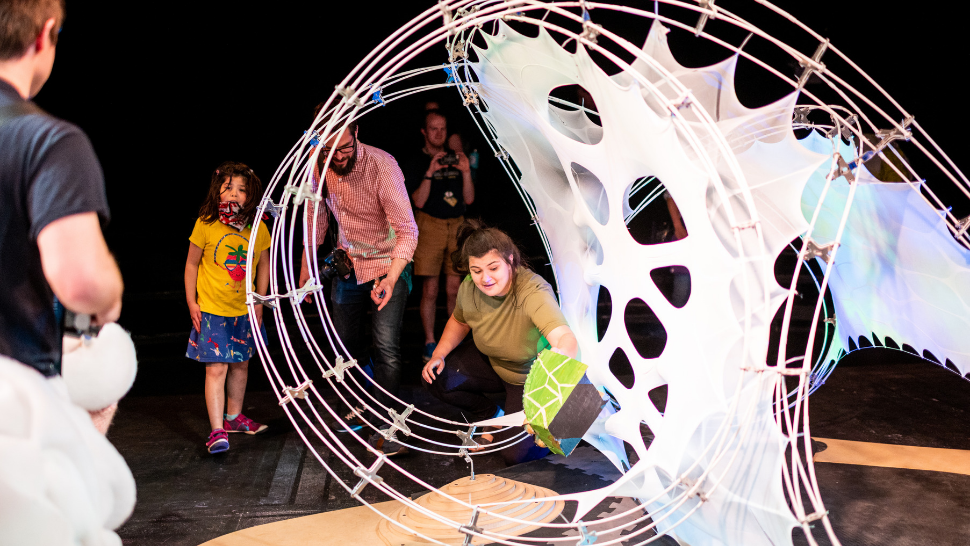 Theater and architecture might seem an odd combination, much like Spartans and Wolverines working together. And yet, two faculty members from these rival schools are coming together and using their respective areas of expertise to create something special for children in the lower Michigan region.

Dionne O'Dell of Michigan State University and Sean Ahlquist of the University of Michigan have joined forces to create POND ADVENTURE, a sensory theater experience for neurodiverse audiences, including children with autism.

O'Dell, Academic Specialist/Faculty in the Department of Theatre & Arts and Cultural Management-Museum Studies at MSU, has a background in children's theater and is the Artistic Director for the Sense-Ability Ensemble, an MSU group that creates sensory theater productions.

Ahlquist, an Associate Professor of Architecture at UM, works with textiles as the primary means to form and create architecture. His daughter, who has autism, has inspired him to use his work to study the relationship between environment and behavior for children with autism.

O'Dell and Ahlquist met at the 2018 Big Umbrella Festival, an event focused on arts programs for children with autism and their families.

Ahlquist's involvement in POND brings a new dimension to sensory theater in the form of a unique architectural structure that acts as the centerpiece of the set. The structure is a large 3D apparatus with a textile that reflects light projections and stretches to create openings that audiences can crawl through and explore.

"It popped into my head about how my daughter explores the world based on how it feels, maybe more so than how it looks," says Ahlquist. "So the fact that I could create these materials, I could really design the feel of a material - I thought, wow maybe I could design it in a way that actually suits my daughter or in a way that makes it exciting for her to explore."

POND differs from traditional theater in that it has only a loose narrative structure. The performance entails actors guiding audience members on a journey during which they interact with characters and navigate Ahlquist's sensory structure. They are guided through tasks such as feeding Pacey the Pelican or using cattails to wake up Fabio Frog.

"It's very interactive, and there are songs, and it's all about having the students work together too," explains O'Dell. "A lot of it is, we're looking at the students being able to communicate with one another and with the actors."

POND is not yet ready for official performances, but students such as Ara Ahlquist and her friend Jack have been able to participate in the workshopping phase as the team refines the production.

"It's been super interesting to see the interaction of the students with the big pelican puppet. They absolutely love that puppet," says O'Dell. "A lot of times students with autism have trouble with eye contact and social interaction, so interacting with a puppet is sometimes easier for them."

In addition to the architectural structure and puppet characters, the production is also made sensory friendly through adjustments to lighting and sound. Lighting is dimmed, sounds are lowered, and quiet spaces are made available if a child needs to disengage. Further, with his sensory structure, Ahlquist has attempted to create a world that is more malleable than ours, literally, and more susceptible to the control of its inhabitants.

"What we're always striving to create is an environment that is as transformable and adaptive as possible," explains Ahlquist. "We're trying to almost cede the control of design to my daughter, to another child, to another individual so that whatever emotion or interest they're feeling at that moment, they can transform this space in one way or another to suit that need."

O'Dell and Ahlquist plan to continue workshopping POND and estimate it could be ready for performance around fall 2020, at the earliest.