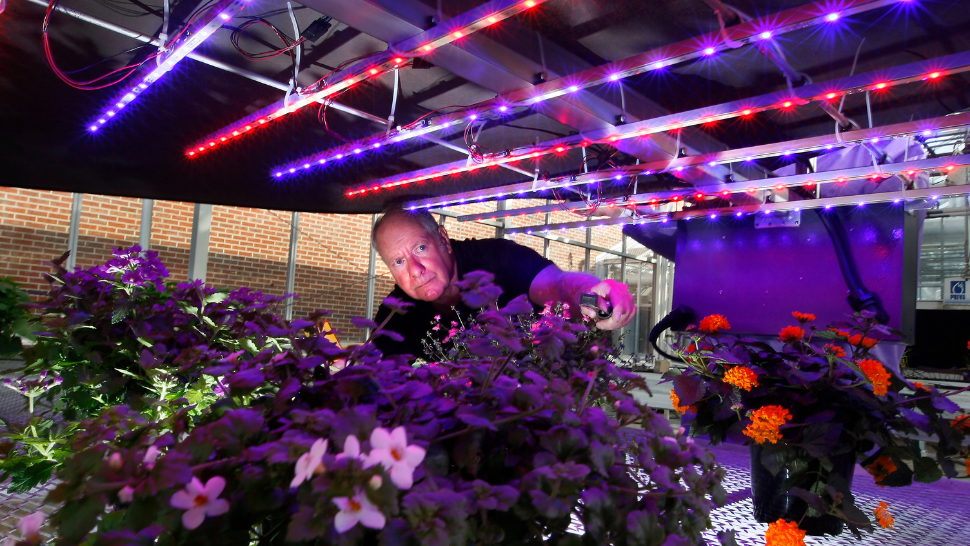 When you think about what astronauts eat while in space, what comes to mind?

Your thoughts probably drift to Tang, the bright orange citrus drink made famous during the Mercury and Gemini missions of the 1960's. Or, possibly, as a child you purchased an envelope of brittle astronaut ice cream, which, while developed for NASA, was never actually eaten in space.

While these items represent the early examples of the food created to fuel humans in space, spaceflight cuisine is still often of the processed and dried variety. For good reason, too, as the reduced payload weight and energy-efficiency that come from removing foodborne water and eliminating refrigeration units is mission critical.

But does that mean that humans travelling in space will never be able to enjoy fresh foods?

Cary Mitchell, a professor of horticulture and landscape architecture at Purdue University, has spent more than four decades studying plants and the factors that impact their grown, all the while wondering why those traveling in space couldn't have a fresh salad.

For much of his career, his focus hasn't been on growing lettuce or tomatoes in a backyard or even a farm. Mitchell's task is helping develop the technology and the methods that will allow food to grow in outer space.

"We really got started on this on a purely fundamental basic plant physiological phenomenon," Mitchell says of the origin of his work. "We knew that on Earth, gravity is a downward force, that roots grow down and shoots grow up. It's kind of an orienting force. And so, we were wondering back in those days when a few of us, including myself, were starting to work on mechanical stress effects on plants if we could mimic some aspects of gravity or if we could orient plants to grow in certain directions in the absence of a gravitational vector."

Mitchell has been working with NASA since the 1970's on a variety of projects. Early in his career he earned funding from the space agency to research how plants would orient in a gravity-free environment. That study led to his involvement with NASAS's Controlled Ecological Life Support System (CELSS) program, that developed strategies for using plants for a variety of benefits, from food to the production of oxygen in outer space.

From plants, Mitchell expanded his research into lighting. He realized that there was more than just the change in gravity that impacted a seed's ability to grow in outer space; the different light also played a factor. Spaceships needed lighting that would be bright enough to provide what the plants needed, but not such that it would scorch the plants or overheat spacecraft. They also couldn't consume too much energy or be too heavy, for obvious reasons.

"I became aware that new technologies like light emitting diodes were being investigated at a very fundamental level for use with plants," Mitchell says. "I began to look at how could I leverage some of the unique properties of LEDs to cut the energy and power costs back more so we can get plants back on the radar screen."

What Mitchell discovered was that LEDs were a boon to space agriculture almost across the board. They can be operated at an energy savings of 50-75 percent compared to traditional lights, they put off little to no excess heat and they are extremely durable.

One of the main drawbacks in space agriculture is a lack of space - pun intended - for growing. With plants concentrated in tight quarters, lighting becomes tricky. Traditional overhead lighting won't fully penetrate this thick canopy. To work around this, Mitchell devised a system of red and blue diodes, or "lightsicles," that can be used to light all parts of a plant from the side. This work has directly led to astronauts growing crops, such as greens and dwarf tomatoes, on the International Space Station.

When asked how things have changed during his career, Mitchell notes the vast advances that have been made in our understanding of how agriculture can be exported to space in a meaningful way. He also remains optimistic on how this will impact the future of space exploration.

"Technology has allowed us to open doors to solve so many problems," Mitchell says. "What we're waiting for now is for NASA to re-discover that LEDs and utilizing these unique properties of LEDs will help re-open their research."