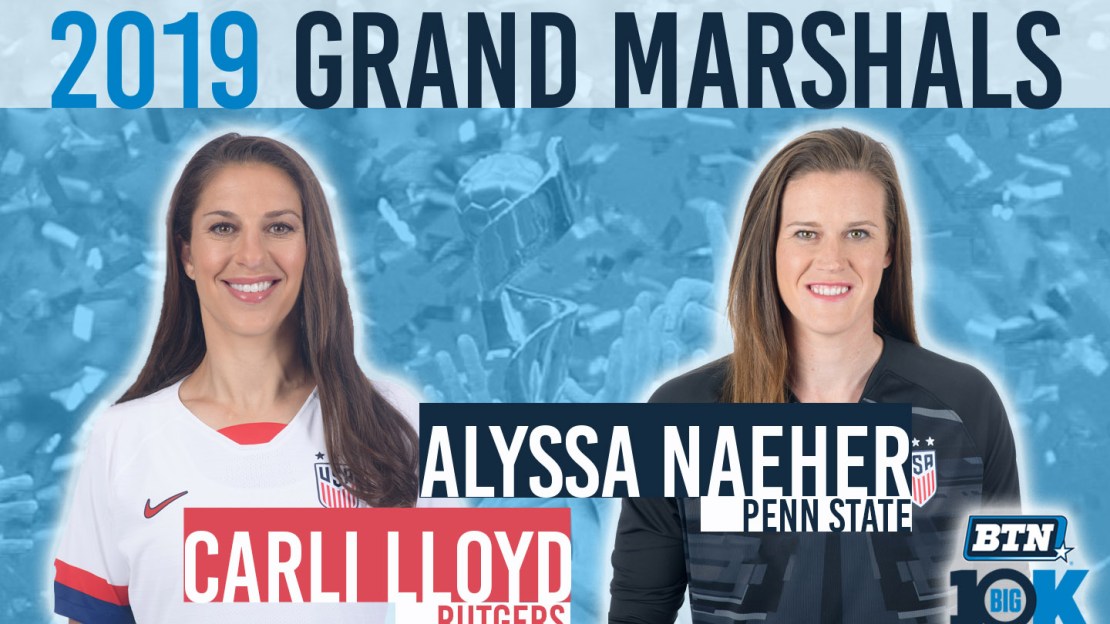 BTN today announced Carli Lloyd and Alyssa Naeher as the grand marshals of the 2019 BTN Big 10K. The recently crowed FIFA Women?s World Cup champions and graduates of Rutgers and Penn State will join thousands of Big Ten fans and runners on Sunday, Aug. 11, for 10K and 5K runs, as well as a massive tailgate party in Grant Park along Chicago?s picturesque lakefront. Lloyd and Naeher will deliver a pre-race pep talk to the runners, present awards for the top 10K and 5K finishers and be available for photos throughout the day.

Runners of all ages can register for the 10K and 5K runs, which annually draws more than 10,000 racers from across the world, by visiting btnbig10k.com. Celebrating Big Ten spirit, the BTN Big 10K provides runners with their choice of a school-specific, technical race shirt to ensure alumni and fans can run with pride on behalf of one of the 14 Big Ten Conference universities. It is currently $65 to register for the 10K, and $50 to register for the 5K. Online registration closes on Wednesday, Aug. 7, at 11:59 p.m. or when registration capacity is reached.

The 10K will once again be followed by a post-race tailgate which includes mascots and cheerleaders, food, beer, live music, tailgate games, exciting prizes and some of your favorite BTN personalities. Each race finisher 21 and older will receive a Bell?s Oberon beer, complimentary AmyLu sausage and an official BTN Big 10K commemorative medal and the top overall runners will receive cash prizes.

Lloyd?s illustrious career at Rutgers resulted in her induction into the Rutgers Hall of Distinguished Alumni in 2013. Lloyd is No. 1 all-time in the Rutgers career record books in points (117) and goals (50), as well as points (37) and goals (15) for a single-season. Lloyd served as a foundational player for the Scarlet Knights program, when as a freshman Lloyd led Rutgers to the Sweet Sixteen in what was the program's second-ever NCAA Tournament bid in 2001. As a professional, Lloyd is a two-time Olympic gold medalist, two-time FIFA Women?s World Cup champion, two-time FIFA Player of the Year and the USWNT?s all-time leading scoring midfielder. Her Olympic accomplishments are particularly outstanding, as she became the only American to score multiple goals in three separate Olympic Games, including the 2008 Olympics when she scored the game-winning in the gold medal match victory vs. Brazil and the 2012 London Olympics when Lloyd scored twice in the 2-1 gold medal victory vs. Japan. Additionally, Lloyd ranks third place all-time in US history with 10 World Cup goals.

Naeher started 74 games in goal for the Nittany Lions, earning two-time All-American honors in 2007 and 2008. Named the Big Ten Defensive Player of the Year in 2007, Naeher posted a career 50-19-5 record with 24 shutouts and over 300 career saves in State College. Naeher is a two-time member of the USWNT, earning a FIFA Women?s World Cup championship in 2015 prior to starting every game and playing every minute in the 2019 World Cup. She recorded three consecutive shutouts in the group stage against Thailand, Chile and Sweden, but saved her biggest performance for the semifinals. In the 83rd minute, Naeher stopped a penalty kick attempt from England, which preserved the United States? 2-1 lead en route to a victory. In the final against the Netherlands, Naeher posted another shutout as the U.S. captured the World Cup title. She is also currently the starting goalie for the Chicago Red Stars of the National Women?s Soccer League team, which play their home games less than 15 miles from the site of the BTN Big 10K.

Returning in 2019 as the race?s official charity partners are Special Olympics Chicago and ALIVE Rescue. The Special Olympics mission is to provide year-round sports training and athletic competition in a variety of Olympic-type sports for children and adults with intellectual disabilities. ALIVE Rescue works to save, rehabilitate and place abandoned, abused and stray animals.