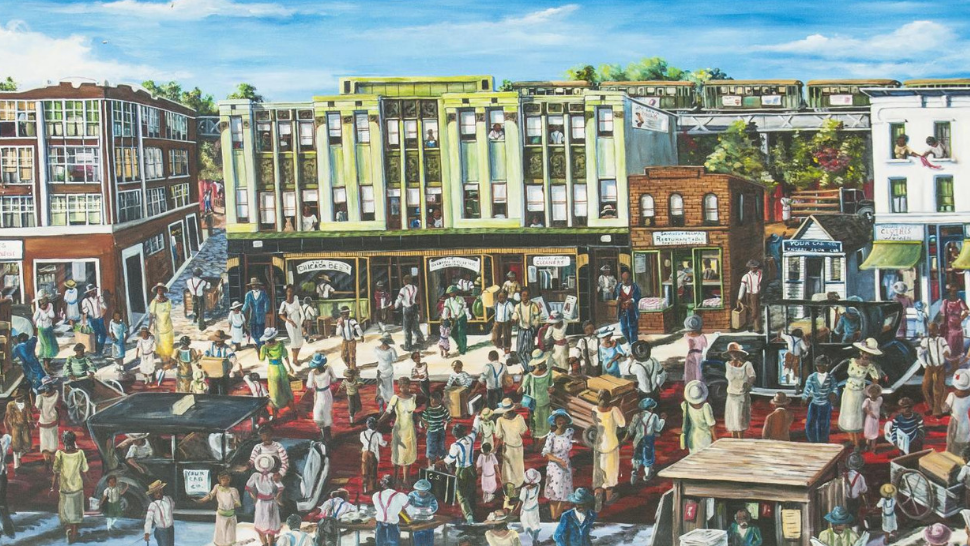 Detail of A Bronzeville Saturday by Gregg Spears

It would be hard for many among us to imagine the astounding journey of Timuel D. Black, Jr. Most of us weren?t born the grandson of slaves. Most of us didn?t journey north in the Great Migration. Most of us didn?t see the boom and bust of the Rust Belt, have to bear the tremendous power of racist machines or take hope in the spirit and strength of a community.

For us though, Black tells his tale in the powerful new personal history Sacred Ground: The Chicago Streets of Timuel Black (Northwestern University Press, 2019.) The noted activist, historian and educator, with the help of writer Susan Klonsky, recounts a life of turmoil and tenacity forged in a city whose triumphs are often eclipsed by its great sins. 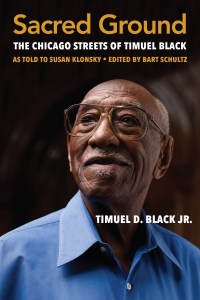 Born to sharecroppers in Birmingham, Alabama in 1918, Black was hardly home when his family made the journey north, as so many other African-Americans did, seeking work in the industrial cities of the north. He grew up in what has been described as a ?Black Metropolis,? Chicago?s Bronzeville neighborhood. In the 20?s and 30?s, it was a place of some poverty, some wealth, much happiness but even more unrest. After serving bravely in WWII and seeing action on D-Day, Black returned to a segregated city built on the bedrock of racism.

With degrees from Roosevelt University and the University of Chicago, Black began teaching high school on the south side of the city. Concurrently, he became a leader of the nascent civil rights movement. He supported the southern sit-ins and arranged for national leaders, such as Martin Luther King, Jr., to hold rallies, give speeches and host education session for the community.

Black came in to contact with celebrities, such as Duke Ellington., as well as everyday people who came to define the movement he poured his life into. He even helped mentor an energetic, young community organizer named Barack Obama.

Along the way, he became something of a griot, a West African term for a bard who is a living repository of a people?s history.  Dr. Lonnie Bunch, 14th Secretary of the Smithsonian Institute and founding director of the National Museum of African American History and Culture, in an interview with the Chicago Sun-Times, said Black is ?the keeper of the flame. He keeps the history of black Chicago alive, reminding us that civil rights is an ongoing struggle.?

A strong and lively centenarian, Black has cemented his place in the history of Chicago. While his early works Bridges of Memory: Chicago's First Wave of Black Migration and Bridges of Memory: Chicago's Second Generation of Black Migration (both from Northwestern University Press,) cover the larger story of the Great Migration, Sacred Ground strikes a more deeply personal chord. These are streets and stories that helped to form a man and movement that continues to this day, both through Timuel Black and those who touched along the way.