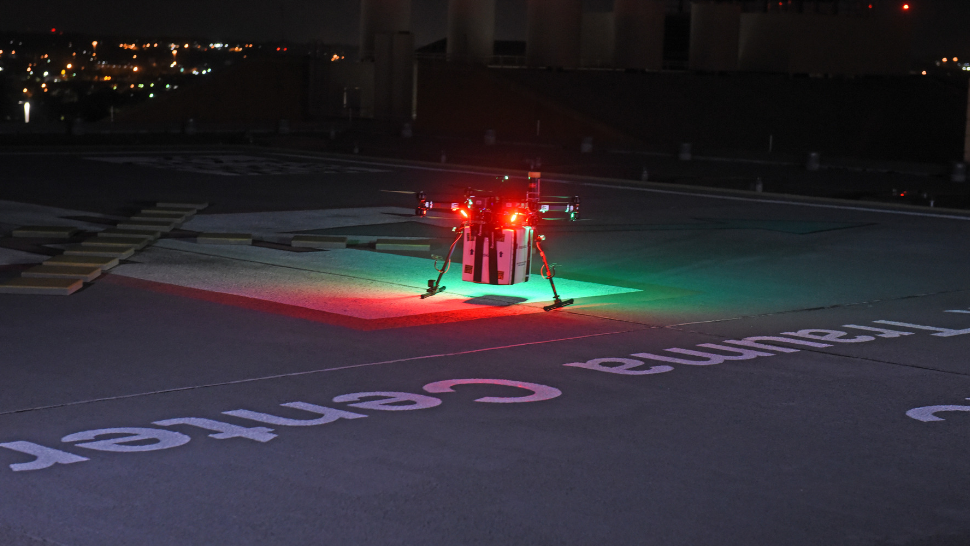 Early in the morning of April 19, 2019, an unmanned aircraft flew above Baltimore. After traveling 2.6 miles in roughly 10 minutes, the aircraft landed softly at its final destination - the University of Maryland Medical Center. The trip itself was not remarkable, but what the journey represented was literally life-changing.

The drone was carrying a kidney to a team of doctors and a patient in need. According to the university, this marked the first-ever organ transported via unmanned aircraft. This short trip was many years in the making, and the researchers and doctors behind it hope this could prove to be a game-changer for patients looking for a donation.

Matthew Scassero, the director of the University of Maryland Unnmanned Autonomous Systems (UAS) Test Site, said there were several challenges to getting the drone from its departure location to the hospital while keeping the kidney safe and secure. It took years of coordination between aviation specialists and medical professionals to even attempt the trip, including participation from members of the Federal Aviation Administration. Once the technology allowed for something like this to be tried, the team of experts involved had to make sure nothing was left to chance.

"[The greatest challenge was] maintaining continuous communications with the vehicle, (which we solved by) using mesh network radios from Silvus Technologies; and having to design and build a custom UAS that incorporated redundancy and reliable components to safeguard the transportation of such a high value payload," Scassero explained.

The team attempted many test flights and practice runs to account for as many outside factors as possible, and then made updates to ensure those factors didn't risk the flight. On the night of the trip, all the systems in the drone were green - meaning they were good to go. "We had great confidence in the aircraft and the procedure," said pilot Ryan Henderson Still. There was no backup kidney, so Henderson had to be sure everything went perfect from takeoff to landing.

Tony Pucciarella, the director of operations of the UAS Test Site, echoed the pilot's statements, stating that the years of preparation allowed the 10-minute flight to be a great success.

"We put a lot of time into planning this," said Pucciarella. "I tend toward being conservative in nature with projects like these, to be as safe as possible. The design was solid and the people involved were trustworthy, and that's all you can ask for."

The long-term hope is that utilizing unmanned aircraft to transport organs will improve access for those who require a transplant. According to the U.S. Health Resources and Services Administration, there were more than 113,000 men, women and children on the national organ transplant list as of January 2019. More than 80 percent of those people are in need of a kidney. Being able to transport a vital organ in very little time with very little manpower could save the life of somebody on that list.

Those possibilities have people like Scassero thinking of the future. "As with all fields, the imagination is the limit. If you can build it and code it, you can do it," he said. "Addressing the regulatory structure is one of the biggest needs, but our collaborative approach is doing that. We see a very bright future for the combination of medical technology and healthcare with all aspects of unmanned systems across all domains, and on up to machine learning and artificial intelligence."

"It's a real honor and pleasure to be a part of this," pilot Henderson added. "In aviation, you interact with a lot of interesting projects, but this is really special because it has the possibility of touching lives throughout the world."