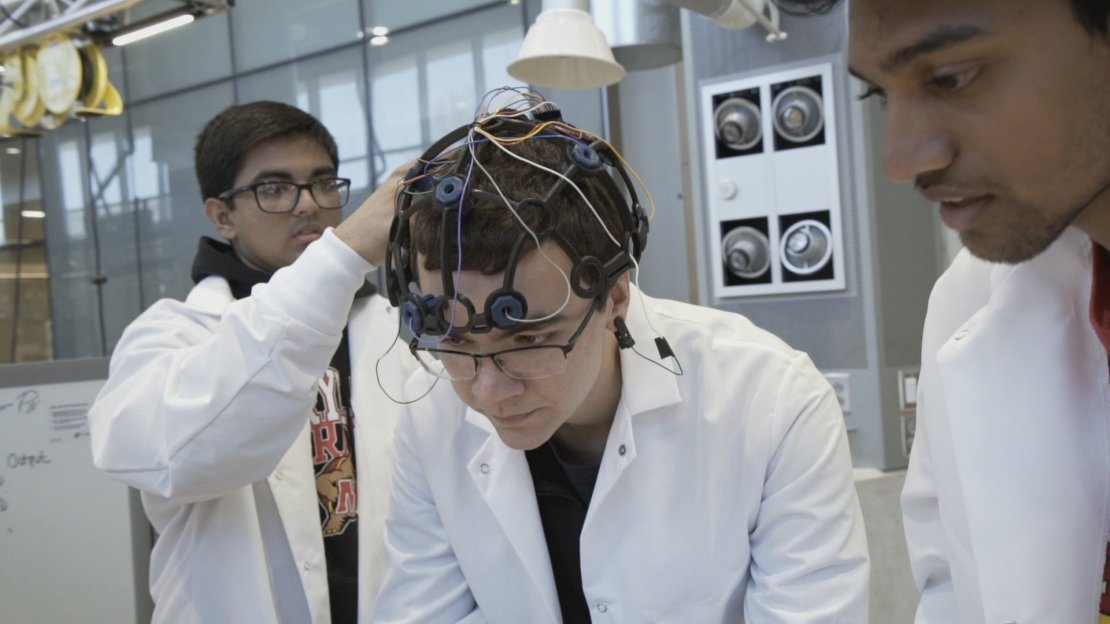 Alzheimer's is an insidious disease that robs its victims of their memories, and eventually their mind entirely, at a slow pace. To bear witness to its progression in a loved one is agonizing. Christopher Look learned about that agony at a young age.

"When I was about four years old, I went to Hong Kong with my mom to visit my great grandmother's grave," explains Look. "She had died from a disease I learned later was Alzheimer's. As I grew older, I realized it was very impactful what had happened leading up to her death. I know that my mom went through a really hard time, having to watch her grandmother go through not understanding what was going on anymore. Not being the person that she used to be."

Look, now a junior double majoring in bioengineering and computer science at the University of Maryland, is using that experience to fuel his passion for research. Specifically, he is a co-founded Synapto, a company that aims to revolutionize how Alzheimer's is diagnosed.

Despite being the 6th leading cause of death in the US and costing the nation nearly $259 billion annually, an Alzheimer's diagnosis can take up to two years from the first signs of symptoms. It's a costly process that can include neuroimaging, such as a CAT or PET scan, and possible assessment by a geriatric psychologist or psychiatrist.

Conversely, Synapto uses an open source, 3D-printed portable electroencephalogram (EEG) headset and proprietary mathematical biomarker analyses to comb through a patient's brainwaves. Their hope is that this will lead to quicker and cheaper diagnosing that can be done in a physician's office.

"It's just a patient that has a headset on, that has their eyes open and eyes closed for ten minutes each and is looking at a blank wall," explains Synapto CEO Dhruv Patel, a junior majoring in bioengineering at Maryland. "We're able to take that resting ambient brainwave data and perform all sorts of analysis on it. We look at how powerful certain bends are. We look at how different parts of the brain, different parts of neurons are interacting with each other.

Patel further explains that what their analyses pick up on is the lack of functional connectivity in the brain of a person with Alzheimer's. "Essentially, different regions in the brain aren't really good at connecting with each other and aren't really good at talking with each other, which is what is one of the underlying pathological causes of the disease."

Synapto got its start when Patel and Look, then freshmen, joined the Biomedical Engineering Society at Maryland. The group challenged students to create entries for the National Institutes of Health's Design by Biomedical Undergraduate Teams (DEBUT) Challenge. The pair, along with six other students, began looking into the application of portable EEG technology and machine learning algorithms to various neurological maladies.

Their first idea, a foray into quick and accurate concussion diagnosis, proved a crowded field. It was then that the early Synapto team decided to apply their skills to the problem of Alzheimer's. Through force of will, they succeeded in securing the data they needed to test their theories and ended up placing first in the DEBUT Challenge, which carried with it a prize of $20,000 in funding.

"When we first emailed a lot of doctors, a lot of professor and got them on the phone," Look remembers, "we said 'We're freshman in bioengineering at the University of Maryland, and we'd love to…' and then click, that was it. Now people hang up on us a little bit less, which is nice."

Synapto has shown extremely high efficacy in proof of feasibility and proof of concepts. Now, the team is looking into conducting new clinical pilot studies with new data and driving product development to the next level. After collecting this data, their hope is to enter into FDA clinical trials and obtain overall FDA approval.

As Patel explains, if all goes according to plan, the impact of Synapto could revolutionize elder and dementia care.

"Our biggest vision is to make Alzheimer's screening routine," says Patel. "We want it so that patients go into a physician's office and get this EEG test done maybe every six months, twelve months, depending on their risk factor. Assume that you can detect Alzheimer's within the first three months. That completely transforms the life of the patient and the life of the family around them. They're able to now enter into early clinical trials and transform the entire Alzheimer's research industry in general. They're able to get on an early drug regimen that has a lot higher chance of working. They're able to engage in legal and financial planning for themselves and for their families."