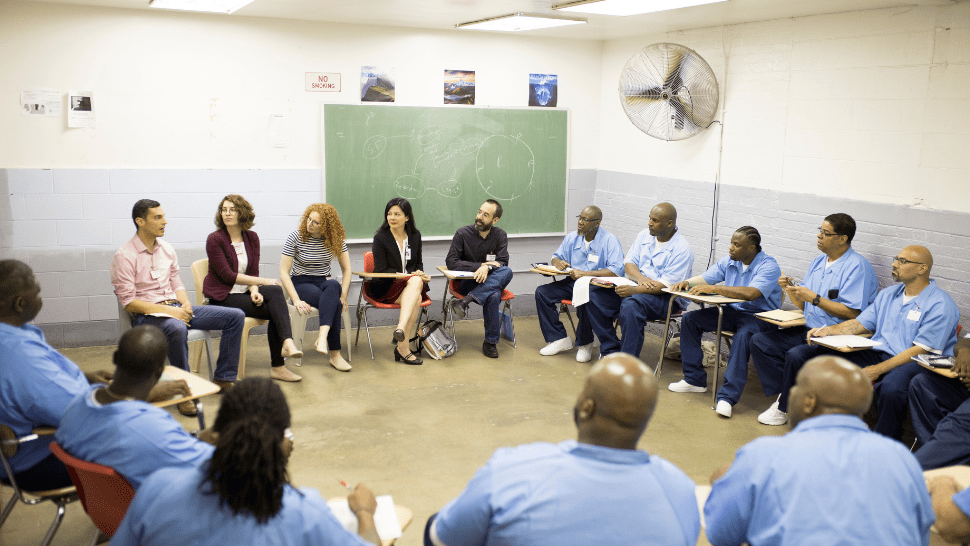 Illinois has among the most overcrowded prisons in the entire country. According to the Illinois Department of Corrections, there were nearly 50,000 residents in either state or federal prison at the end of 2018. Yet, until that year, the state didn't have a post-secondary, degree-granting program available to the incarcerated.

That's what inspired the Northwestern Prison Education Program, which aims to provide a high-quality education to the prison population and increase their opportunities upon release. Under the leadership of Jennifer Lackey, the program's director and a member of the Northwestern University Department of Philosophy, those incarcerated students receive credit through Northwestern's School of Professional Studies.

"Education has been shown over and over again to be one of the most effective ways of positively intervening in the criminal justice system," Lackey says. "We don't need more prisons; we need more – and better – classrooms."

The classes for NPEP are taught at Stateville Correctional Center in Crest Hill, Illinois. Anyone in Stateville is eligible for the courses, as long as they have a high school diploma or GED and are not limited by IDOC restrictions.

Faculty all across Northwestern's curriculum contribute as instructors, as does an advisory committee of graduate students. The program follows the same academic calendar as Northwestern's undergraduate campus and each quarter there are classes taught about a specific topic or theme. For the Spring Quarter, that topic is Decision Making, with psychology professor H. David Smith teaching students about judgement and the ramifications of the choices they make.

In addition, students will also learn about math, science, film, literature, law and a range of other subjects. Lackey wants every student in the program to get a well-rounded education so that they are prepared for anything that may come their way when they are released. She cites studies that show there is a 43 percent reduction in the recidivism rate for prisoners that partake in education programs. For those who earn a bachelor's degree, that drops to 5.6 percent; with a Master's degree, it's 0.

"All of this is what inspired me to create the NPEP," Lackey says. "I had already been teaching in Illinois prisons and jails for years, and so I saw firsthand not only the desperate need for a college-in-prison program in Illinois, but also the life-changing impact education has on incarcerated students. The hope is to make the prison as much like a college campus as possible."

Lackey said she aims to teach her courses at Stateville the same way she'd teach her Northwestern students on-campus in Evanston. However, many of the topics covered impact NPEP students in profoundly different ways than they would an unincarcerated one. Ethical subjects such as torture and police brutality impact many of them on a personal level, and their unique perspectives form the basis for thoughtful discussion.  As a teacher, Lackey has to  adjust her style somewhat to make sure she accounts for these powerful experiences. That's where it helps to have a classroom full of engaged students who are passionate about learning and bettering their lives.

"Prisons are places of profound dehumanization, stagnation and isolation," notes Lackey. "But classrooms are humanizing, transformative and community-building. No one who is living the life of the mind-who is moved by a powerful line in Shakespeare, who debates a timeless ethical question, who figures out a challenging math problem-can deny that they and those around them are fully human. As students explore new texts and ideas, they grow and change. They see themselves as smart, and capable, and deserving. And then, since ideas demand to be shared, education builds a community even when all of the forces at work in your environment try to keep you isolated.

"Students not only connect with their classmates, they return to their cell house and share their books and assignments and ideas with those around them. And, so education begins to change the prison itself from a place of complete darkness to ones with pockets of light."