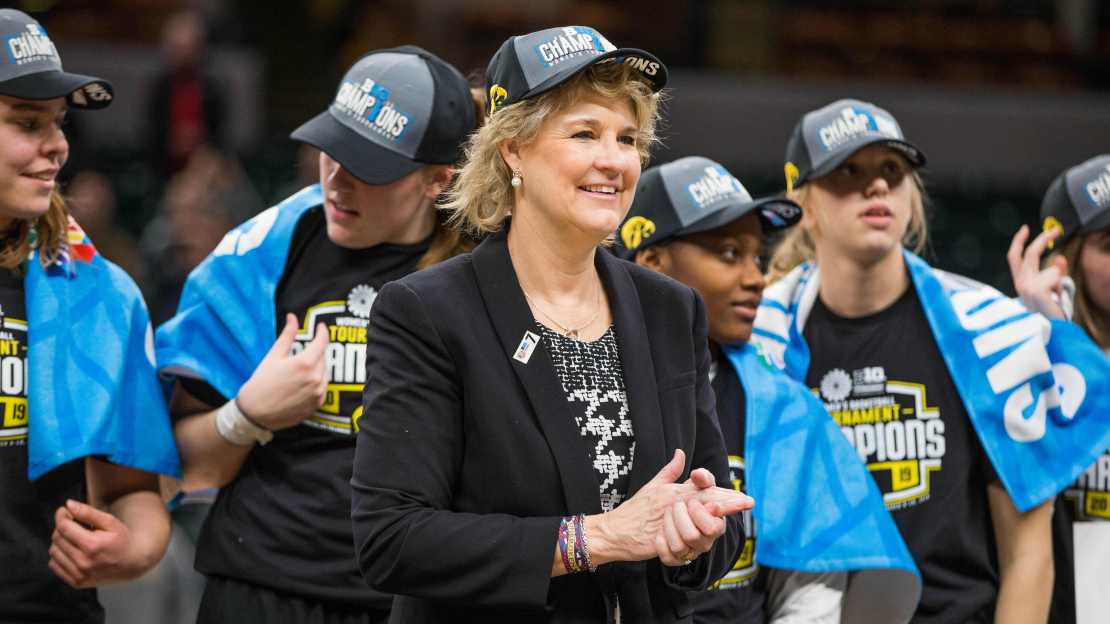 Indiana, Iowa, Maryland, Michigan, Michigan State and Rutgers earned their way into this year's tournament, with Iowa and Maryland receiving top-four seeds and the right to host first- and second-round games this weekend.

This marks the second consecutive year, as well as the 15th time in the past 19 years and 22nd time in Big Ten history that at least six current conference members have been selected to compete in the NCAA Tournament.

Indiana earned the No. 10 seed in the Portland Region and will head to Eugene, Oregon, and Oregon?s Matthew Knight Arena for first- and second-round action. The Hoosiers will meet No. 7 seed Texas at 7 p.m. (ET) Friday on ESPN2, with the winner advancing to play No. 2 seed (and subregional host) Oregon or 15th-seeded Portland State in the second round on Sunday (all second-round times and TV coverage are yet to be determined). Indiana follows Michigan as the second Big Ten school in as many years (and the fifth in conference history) to reach the NCAA Tournament the year after winning the Women?s National Invitation Tournament (WNIT) title. The Hoosiers are appearing in the NCAA Tournament for the sixth time overall, and the first time since 2016, and own a 2-5 (.286) all-time record in the NCAA Tournament, including a Sweet Sixteen appearance in 1983.

See you in Eugene ??? #iuwbb pic.twitter.com/1rFWehALvh

Iowa is the Big Ten?s automatic qualifier into the NCAA Tournament after the Hawkeyes won their first Big Ten Tournament title since 2001. Iowa is the No. 2 seed in the Greensboro Region (the program?s highest seed since it was a No. 2 seed in 1996) and will play host to first- and second-round games on campus at Carver-Hawkeye Arena for the fourth time in seven years (also 2013, 2014 and 2015) . The Hawkeyes will take on 15th-seeded Mercer at 2 p.m. (ET) Friday on ESPN2 with the winner of that game moving on to face either No. 7 seed Missouri or 10th-seeded Drake on Sunday. Iowa is making its 26th NCAA Tournament appearance and second in as many seasons. The Hawkeyes, who have a 21-25 (.457) record in NCAA Tournament play, including a 13-7 (.650) record at home, are one of eight current Big Ten schools who have advanced to the NCAA Women?s Final Four during their program?s history, doing so in 1993.

Maryland, which secured its fourth Big Ten Championship in five years as a conference member, is the No. 3 seed in the Albany Region and like Iowa, the Terrapins will remain on campus at the XFINITY Center for the opening weekend of tournament play. Maryland will play 14th-seeded Radford at 11 a.m. (ET) Saturday on ESPN2 with the winner of that game advancing to meet No. 6 seed UCLA or 11th-seeded Tennessee on March 25. Maryland is set to make its 27th NCAA Tournament appearance (the most by any current Big Ten school) and the Terrapins? ninth in a row. Maryland has compiled a 45-25 (.643) record in the NCAA Tournament, including a 21-4 (.840) record at home, having won the national championship in 2006 and reaching the Final Four five times, most recently in 2015 during its inaugural season in the Big Ten.

Time to dance in College Park!! ?#Terps are the No. 3 seed in the East Region and will open up NCAA Tournament play against No. 14 Radford on Saturday at 11 am!#FearTheTurtle pic.twitter.com/qzk0RV2yHe

Michigan is the No. 8 seed in the Albany Region and will take on ninth-seeded Kansas State at 2 p.m. (ET) Friday on ESPN2 in Louisville, Kentucky, at Louisville?s KFC Yum! Center. The winner of that contest will play the winner of No. 1 seed (and subregional host) Louisville vs. 16th-seeded Robert Morris on Sunday. Michigan is making its eighth NCAA Tournament appearance and second in as many seasons, representing the program?s first back-to-back tournament trips since 2012 and 2013. The Wolverines are 4-7 (.364) in their seven previous NCAA Tournament appearances, having reached the second round four times, including last season.

Wolverines are making their second straight and 8th overall trip to the Big Dance. No. 8 seed U-M will face No. 9 seed Kansas State on Friday at 2 p.m. in Louisville. https://t.co/Z4xOin8171 #goblue #NCAAW pic.twitter.com/ZI876wTSsL

Michigan State received the No. 9 seed in the Chicago Region and heads to Notre Dame, Indiana, to play eighth-seeded Central Michigan at 1 p.m. (ET) Saturday on ESPN2 at Notre Dame?s Purcell Pavilion. The winner of that contest moves on to meet the winner of the first-round game between No. 1 seed (and subregional host) Notre Dame and 16th-seeded Bethune-Cookman on March 25. The Spartans earned their 17th NCAA Tournament berth (returning after a one-year absence) and their 14th appearance in the past 17 seasons. Michigan State is 18-16 (.529) in NCAA Tournament games, highlighted by a trip to the 2005 national championship game.

The Spartans are dancing! ?

Rutgers is the No. 7 seed in the Albany Region and is bound for Storrs, Connecticut, and UConn?s Gampel Pavilion for first- and second-round games. The Scarlet Knights will play 10th-seeded Buffalo at 4:30 p.m. (ET) Friday on ESPN2 with the winner of that game advancing to play No. 2 seed (and subregional host) UConn or 15th-seeded Towson on Sunday. Rutgers will be making its 25th NCAA Tournament appearance and its first since 2015 (the program?s first year in the Big Ten), having compiled 36-24 (.600) record in the NCAA Tournament, including a place in the 2007 national championship game as well as a trip to the 2000 Final Four.