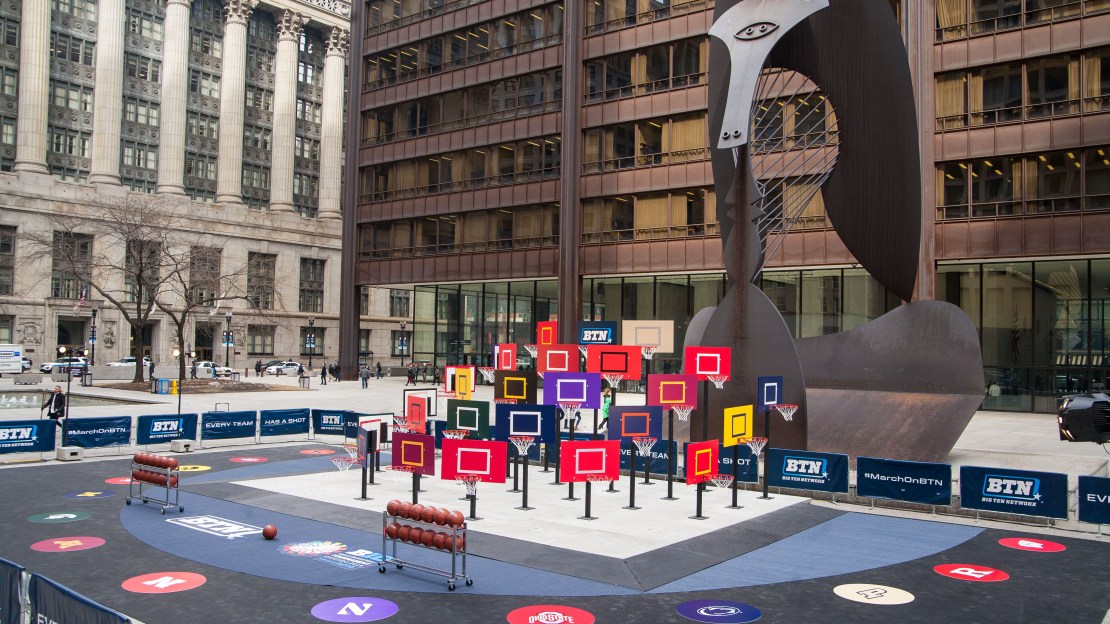 In addition to BTN?s week-long television coverage of the Big Ten Men?s Basketball Tournament presented by SoFi, the network?s creative and digital team will also look to leave its mark on the Windy City ahead of Wednesday?s opening tip-off.

In partnership with creative and media agency Fallon, Chicago?s iconic Daley Plaza has been transformed into a basketball-themed playground. Open to the public from 11:30 a.m. to 8:30 p.m. and located at 50 W. Washington Street, a custom-built basketball court will feature 29 school-specific basketball hoops positioned inside a three-point arc adjacent to Chicago?s famous Picasso sculpture. The hoops range in height from four to 12 feet tall, with over two dozen BTN basketballs available for a mid-day shootaround. Every Team Has A Shot. Why shouldn?t you?

Across the river and a few blocks to the northeast, an ?All Signs Point to BTN? art installation resides in front of the Conrad Hotel near the intersection of Erie and Michigan Ave. (101 E. Erie St.). Standing 20-feet high and displaying the distance to all 14 Big Ten Schools participating in the tournament on BTN, the structure will remain in place until Friday, March 15. Similarly, oversized #MarchOnBTN hashtag letters will be placed just outside of the United Center, on the north side of Madison street, for photographs.

For those who can?t make it around town or to the United Center for the tournament, BTN is preparing to deliver it directly to you. Seven videographers will be on-site to produce custom features, highlights and player and coach interviews for BTN?s 14 school-specific Twitter accounts throughout the entire tournament, presented by Yahoo! Sports.

For fans looking to watch their teams in action, the first 10 games of the tournament on BTN can also be streamed via the FOX Sports App. The Big Ten Men?s Basketball Tournament Presented by SoFi begins on Wednesday, March 13, from the United Center. The daily schedule is listed below (all times Eastern). Please note, times are approximate.