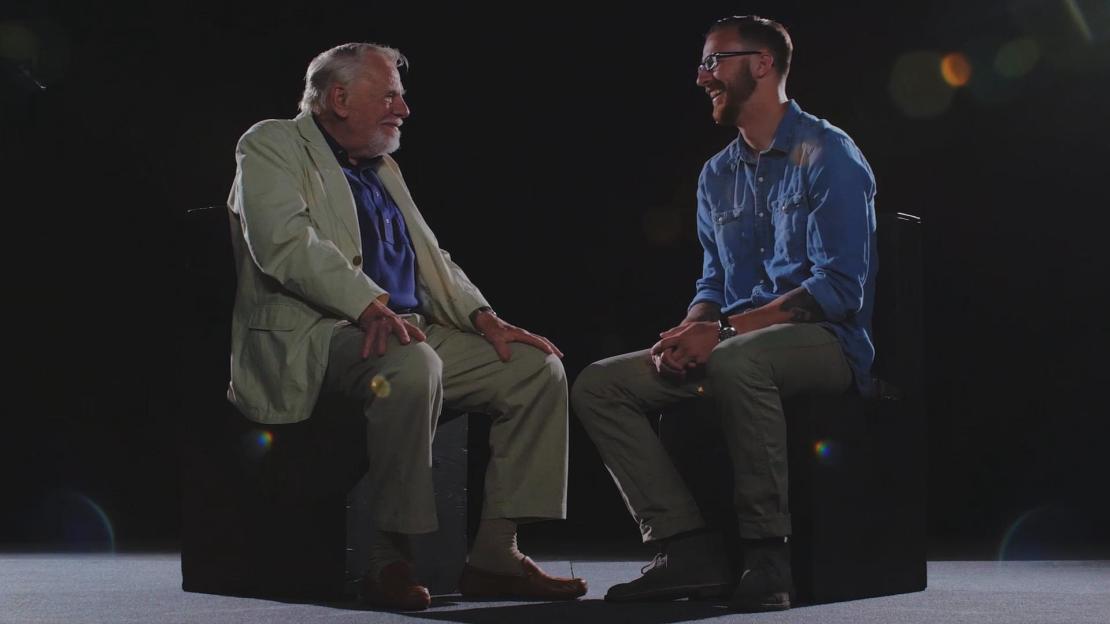 Two people sit close together. Their conversation is warm and jovial at times, probing and inquisitive at times; they laugh as they trade stories with one another. Each studies the other?s face.

But this isn?t a scene playing out in a local coffee shop or bar. Rather, it is a unique film project called FaceAge. The pair, one ?old? and one ?young,? appear across three screens that allow an audience to immerse themselves in the conversation as it unfolds and to view it from different perspectives.

?I wanted younger and older people to talk to each other and to really study each other?s faces because that?s where aging is noticed,? says Penn State theatre professor and FaceAge creator Andrew Belser. ?I wanted people to be able to linger on these questions of aging. I wanted to get people to feel close up, a sense of aging in each other?s faces. I felt that those interactions would allow an audience to linger, to look at different places, and to really study what aging is.?

While living in Wilmington, NC, Belser, who is the Director of the Arts and Design Research Incubator at Penn State, became intrigued with the concept of age, particularly as it plays out across our faces. He wanted to know more about why some people feel compelled to surgically alter their face in pursuit of youth, and how people engaged with and come to see their past portrayed through their face.

?We?re all aging, but young people don?t tend to think of it that way and older people are trying to stay young, trying to keep a young appearance,? Belser notes. ?It always seemed to me that we over-valued youthful appearance and in the sacrifice there, the trade-off is that we miss the wisdom of aging.?

That compelled Belser to get people from different generations to sit down with one another and use their faces as a jumping off point to stimulate meaningful conversations. Theses discussions cover topics ranging from race and sexual identity to vanity and mortality.

FaceAge is also a way to bridge what Belser sees as an ever-widening gulf between generations. Factors such as rapidly-advancing technology and dramatically-increased mobility, have created a new social paradigm whereby older generations have significantly less influence on their successors.

Belser also notes, that as human lifespan continues to increase, that widening gulf between the young and old and our near-worship of youth can lead to missed opportunities. ?We have, in the United States, an untapped resource of wisdom, of volunteerism, of people who could engage meaningfully in communities, but we don?t have a lot of ways for that to happen. We don?t simply have a lot of programs that connect younger people and older people.?

The FaceAge model has piqued quite a bit of interest with institutions in the community service, health care and higher education fields as well as with few national organizations. They recently partnered with LeadingAge, a charitable organization focused on education, advocacy and applied research for the aging community, who will be screening FaceAge videos at their upcoming leadership conference. They?re also working on creating a new series of videos for Chinese audiences.

The growth of the project is in keeping with Belser?s larger vision. ?My dream with Face Age is to have it become more of a movement than just a series of films. Maybe something like Story Corp, that intergenerational, face-to-face interaction is super important and is necessary for healthy communities. I think it has to come into communities in lots of different ways for it to become a movement, but I think we?re on our way.?