Rutgers opens 'Windows of Understanding' across their community: BTN LiveBIG 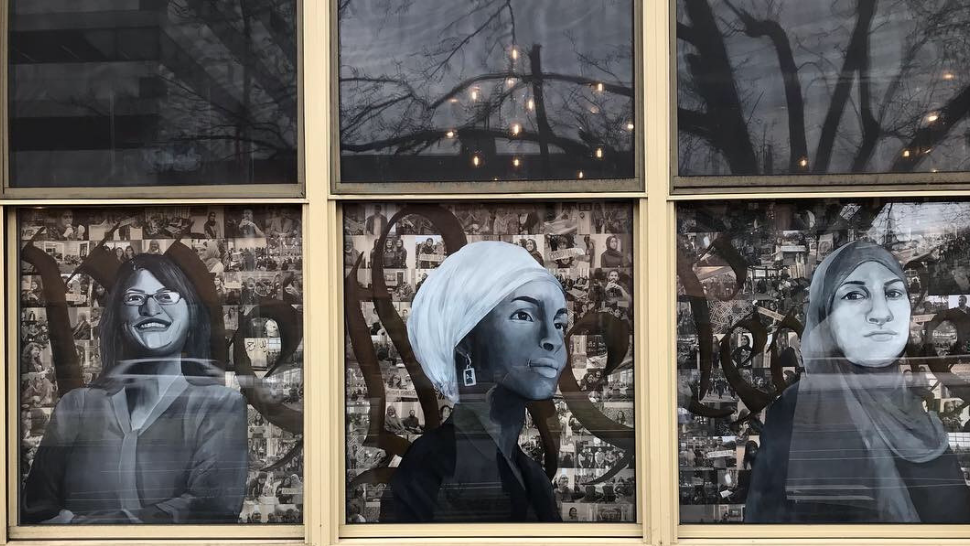 We the People, 2019. Muslim Feminists for the Arts, featured installation in the 2019 Windows of Understanding project. Acrylic on glossy photo paper; large format inkjet printer 46inx41in Photo by Sarah Walley

The terrorist attack in August, 2017, in Charlottesville, Virginia, shook Cassandra Oliveras-Moreno to her core. The Communications and Collaboration Administrator at Rutgers? Mason Gross School of the Arts, Oliveras-Moreno was disturbed by the hate and anger that was at the heart of the white supremacist rally that lead to the death of one protestor and injured dozens more. And she was far from the only one who felt that way.

Over the following months, Oliveras-Moreno regularly met with Jennifer Sevilla, a counselor and social worker in New Brunswick, New Jersey, and Tracey O?Reggio Clark, the interim executive director of the New Brunswick Cultural Center, to discuss what they could do to counter that feeling of hate and anger in their city. Together, the three created Windows of Understanding, a program serving as a direct response to the Charlottesville attack that partners community nonprofit organizations with artists who create portraits that hang in the windows of local businesses.

All across New Brunswick and the neighboring town of Highland Park, beautiful art hangs in the store windows as a way to remind people of the values that bring us together. Each artists was paired with an organization that served as the inspiration for their work.

?The negativity and the hate that was taking over the media landscape and had really been dominating the news cycle consistently,? Oliveras-Moreno said about the creation of Windows of Understanding. ?And I think it?s easy to fall into this sense of helplessness, how little we can do when these things unfold. But the concept was born that I wish we could literally pull back the curtain to show the community what positive strides were being made in our midst that we could become more aware of as a creative counter response.?

The initial idea was to have the windows on display in one specific corridor of New Brunswick. But as more organizations heard about the project and the number of businesses interested in having paintings displayed grew, the organizers had no choice but to expand. Now in windows across the two cities, more than 30 works of art are on display. The art was put up on Martin Luther King Day, and fittingly, runs through the end of Black History Month for its current run. Each piece of art has vinyl lettering that accompanies with the message, ?We see through hate.?

Even when the art comes down, the work will continue. Windows of Understanding earned a community-research partnership grant from the Rutgers Office of Community Affairs for the 2018-19 school year to fund events, performances and other types of art displays.

?Art can serve as a vehicle to show the great work that is being done by organizations in New Brunswick and Highland Park,? Clark said.

The community organization?s being recognized span many different issues, from religious groups to social causes, ranging on topics from poverty to voting to LGBT rights. Clark added that it was necessary to highlight as many issues as possible, so that anyone who sees the art knows that there are resources out there for whatever situation they are in.

Having a diverse group of artists was also necessary, as it allows the windows to tell unique stories through the drawings.

?We couldn't just include one field or one perspective about an issue, when we had different levels to create that platform,? said Sevilla. ?Steering away from that one single story narrative. It was important to highlight that behind these organizations and the headlines are the people.?

The organizers hope that the program?s legacy continues. An extension, titled Tables of Understanding, has been created to get people from different backgrounds speaking with one another, so that the entire community can learn from one another.

?People have been learning about organizations they never knew existed before,? Oliveras-Moreno said. ?The art itself has been very good for generating awareness.?