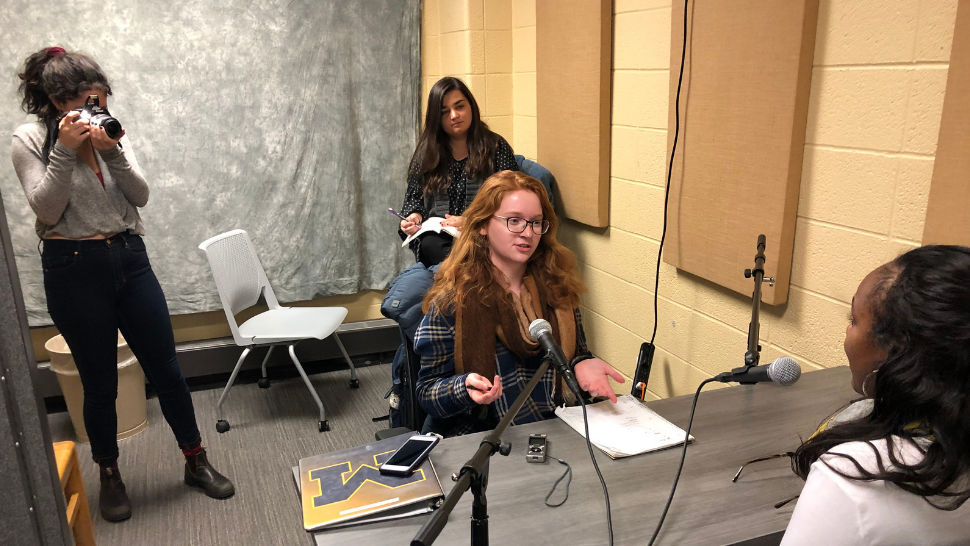 Applying for a job, looking for an apartment and even going out to dinner with a friend - what many may view as common elements of everyday life can be uniquely challenging for a formerly incarcerated individual.

It was with those individuals in mind that a dedicated group of advocates at the University of Michigan created the While We Were Away podcast.

While We Were Away is a project of the Prison Creative Arts Project (PCAP), a program that fosters creative collaboration between the U-M community and people impacted by the justice system.

The podcast provides a platform for formerly incarcerated individuals to tell their stories and, in turn, serves as a reentry resource for those currently experiencing incarceration and those who have returned home.

The idea was born in June 2018 when then-Michigan Radio intern Kathryn Condon approached PCAP staffer and co-founder Mary Heinen with an idea partly inspired by Ear Hustle, a popular podcast about life in prison. U-M students Stina Perkins and Hannah French quickly became involved, and the four worked together to shape the direction of the podcast and identify the reentry theme.

?There simply aren?t very many accessible resources out there for folks who have returned to their communities after incarceration,? explains Perkins, now a graduate with a B.A. in Women?s Studies and American Culture. ?Especially not resources made by the true experts, those with lived experience of incarceration.?

Season 1 launched in January 2019 and includes eight episodes, each bringing listeners an authentic story told by a formerly incarcerated individual. Mary talks about finding joy in work, for instance, and Cozine discusses his relationship with his father. The stories are personal, real and ultimately hopeful.

French, a senior majoring in Anthropology and Creative Writing with a minor in Community Action and Social Change, produces and co-hosts the podcast. She and a dedicated student team put in an immense amount of work behind the scenes, but they are also committed to ensuring it is the storytellers who shine.

?I?m really proud of the way they are honoring the lives of all the people in the podcast and the larger population these people represent,? says Ashley Lucas, Director of the PCAP and faculty advisor for While We Were Away. ?They have done a beautiful job of standing back and letting the people that they were interviewing say what mattered most to them.?

In the spirit of the PCAP, the podcast is a true artistic collaboration between the students and storytellers. Not only have storytellers Mary, Cozine and Martin shared their experiences in their own episodes, but they have also lent their talents to the project - Mary helping articulate the overall vision, Cozine playing the intro music and Martin designing the firefly logo.

?We?re mentored every day by our storytellers,? says French. ?They are incredible consultants, confidants, accountability partners and guide posts. We?re proud and honored to be part of such a supportive, collaborative and vibrant community.?

Though the podcast is primarily directed toward incarcerated and formerly incarcerated individuals, the creators also hope to reach a wider public audience. They use intentional language and allow storytellers to define themselves, efforts to affect change in the way people speak about incarceration and challenge implicit bias.

?We give a lot of space before, during, and after the interview for storytellers to say what they came to say, protect their own anonymity, and provide their own voice,? says French. ?I?m trying to create a story that best represents them, as a person, within the particularity of a reentry experience.?

Season 1 is available on SoundCloud and the While We Were Away website. Season 2 is already in the works and will hopefully debut in Spring 2019.