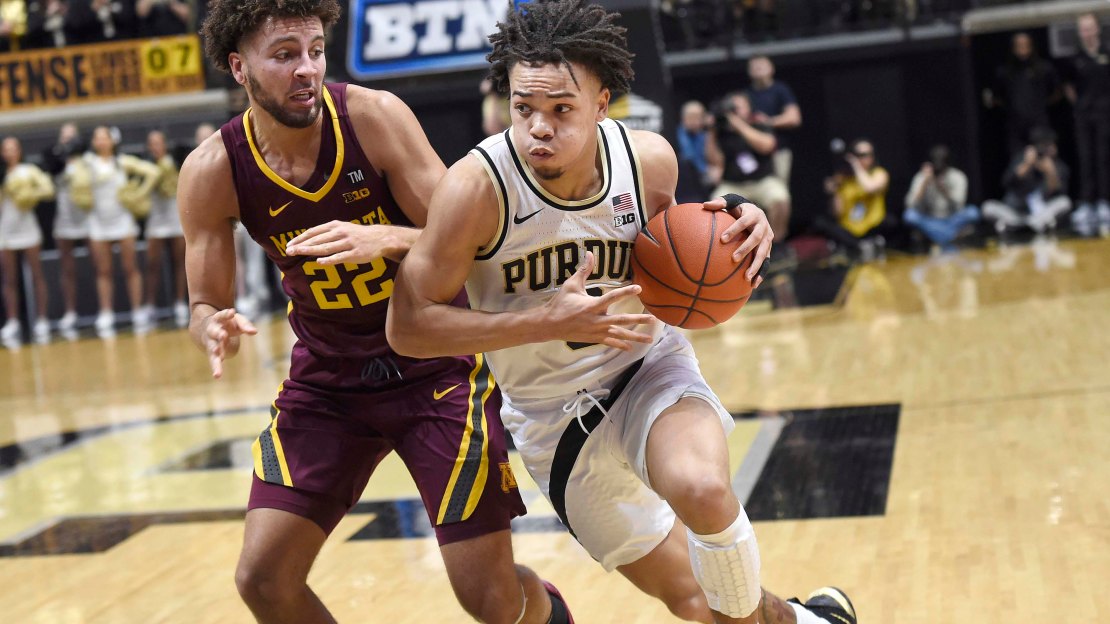 For the third time in as many weeks, there's a new No. 1 in my Big Ten Power Rankings, presented by ArcelorMittal.

This week, it's white-hot Purdue, winner of seven straight, taking the top perch from Michigan, now No. 2.

1. Purdue (16-6, 9-2). Not only does the remaining schedule shape up nicely for the Boilers, they are playing the best of anyone in the conference. As you all know, and will still remind me, I never saw this coming. I'm not sure anyone could have predicted what Trevion Williams would bring to the table, either. He's been key for them.
Last week: 3

2. Michigan (20-2, 9-2). If the Wolverines can get into scoring actions early in transition, it will help them find rhythm on offense. They still have the personnel to contend for the B1G and national championship.
Last week: 1

3. Michigan State (18-4, 9-2). The loss of Joshua Langford was a bit of a gut-punch for the Spartans, who have been up and down at times throughout Big Ten play. Tom Izzo's team will have to rely on transition, toughness, discipline and execution to win games down the stretch.
Last week: 2

Tom Izzo, and only Tom Izzo, is to blame for the OT loss vs. Indiana, according to Tom Izzo.

4. Wisconsin (16-6, 8-3). The Badgers are playing a balanced version of Badger-ball. As trust grows among the contributors on the floor, spacing improves. As spacing improves, Ethan Happ will have more opportunities to dominate the game down low.
Last week: 5

5. Maryland (17-6, 8-4). The young Terps will be tested down the stretch by a brutal schedule. As important as Bruno Fernando, Anthony Cowan and Jalen Smith are on both sides of the floor, Eric Ayala may prove to be a key to sustained success.
Last week: 4

6. Iowa (17-5, 6-5). The Hawkeyes may be the most dynamic team in the mix, but they've got some ground to make up after starting conference play 0-3. Luka Garza and Joe Wieskamp are the tough-minded competitors that bring out the best in a team with unlimited firepower. Iowa is my pick to make a nice postseason run.
Last week: 6

7. Minnesota (16-6, 6-5). The fact that this team sits at 53 in the NET is an absolute joke. This is certainly a NCAA tournament team, but there's work left to do to make that a reality. Luckily, unlike last season in the B1G, there are plenty of opportunities left on their conference schedule to prove they belong.
Last week: 7

8. Ohio State (14-7, 4-6). The Buckeyes have a brutal finish to conference play, but there are plenty of opportunities to pick up solid wins to boost the resume. Kaleb Wesson needs to continue to play at a high level to help the Buckeyes pick up some momentum with PSU, Indiana and Illinois up next.
Last week: 9

9. Indiana (13-9, 4-7). The Hoosiers picked up a huge win at Michigan State, but they've got a lot of work to do to find sustainable success. Getting De'Ron Davis back is a game-changer, as he provides a true inside-presence for their offensive attack.
Last week: 11

10. Rutgers (11-10, 4-7). The Scarlet Knights are playing with a lot of confidence right now. They trust their system, they trust one another, and the presence of Eugene Omoruyi and the toughness he's shown is the emotional jolt this team needed.
Last week: 12

A loss just makes one even more focused.@RutgersMBB will bounce back. pic.twitter.com/ff1Vp9gH4p

11. Illinois (7-15, 3-8). The Illini are one of the most intriguing teams, to me. I see great progress from this incredibly young team. Giorgi Bezhanishvili, Ayo Dosunmo and Trent Frazier playing well together makes them more formidable than their record shows. The Illini will impact the race for the B1G regular season championship.
Last week: 13

12. Nebraska (13-9, 3-8). The Huskers lacked depth prior to Isaac Copeland's season-ending knee injury, and without Copeland the dynamic of the team has completely changed. James Palmer Jr. and Glynn Watson Jr. will have to rally this team, which still sits at No. 33 in the NET, to maintain their position in the NCAA tournament conversation.
Last week: 8

13. Northwestern (12-10, 3-8). The question entering the season was whether the Wildcats could thrive without a true point guard. While their defense has been solid, the lack of a true facilitator seems to have led to an apparent lack of trust and bad shot taking. Northwestern has great sets and a strong post player, things that could turn things around.
Last week: 10

14. Penn State (8-14, 1-10). The Nittany Lions picked up a win at Northwestern with a tremendous performance from Lamar Stevens. The offensive attack must go through him. Stevens will force double teams, which will open the floor for the young perimeter players who need to see good (open) shots early to maintain patience and solid decision-making.
Last week: 14