An Iowa student dreams big with 'No Limbits': BTN LiveBIG 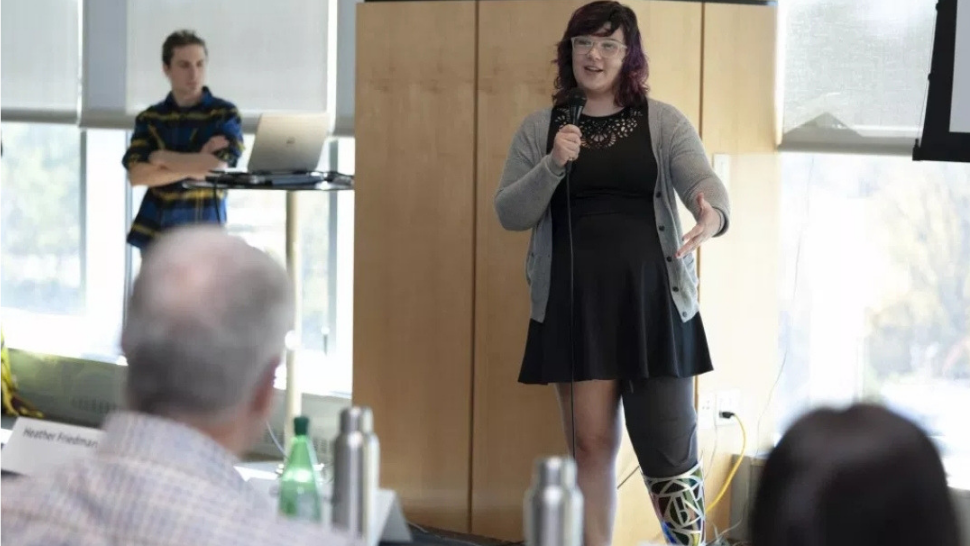 When a traumatic situation strikes, you can either look backward and dwell on it or look forward and turn it into a positive outcome.

After losing her leg in a car crash last year, Erica Cole was faced with this very decision. The enterprising University of Iowa student not only embraced her life-changing experience and the prosthetic limb she now uses, but it might even make her a successful business owner.

Cole started a company, No Limbits, which 3D prints custom covers and other materials for people who have prosthetic limbs. She?s already had success pitching her idea at a number of entrepreneurial contests on campus, and received support from the university?s John Pappajohn Entrepreneurial Center (JPEC).

When the chemistry major was fitted with her prosthetic leg, she became increasingly uncomfortable with the reactions she was getting.

?There was this shift in the way people were treating me,? she says. ?I was getting a lot of sympathy and questions that I didn?t want to answer.?

So, she did something about it, fitting herself with a homemade plastic cover with a cool stained-glass pattern.

?I noticed that the conversation changed when I wore the cover around,? she says. ?Before I was getting [questions like], ?What happened to you?? Then it was, ?What a neat accessory.? And a lot of people didn?t realize I had a prosthetic leg. They thought it was a fashion statement.?

Cole?s idea has evolved well beyond a mere personal fashion accessory. It started with entrance in an elevator pitch competition put on by JPEC, where contestants have one minute to convince judges on the validity of their business ideas.

?I said, ?You know, these covers should exist,?? Cole says. This was before she even built the cover for her own leg. ?People were like, ?That?s cool. That should exist.??

As she prepared for another contest, the Iowa Startup Games, a few weeks later, she began to research the market for her product.

?We did a bunch of customer discovery,? Cole notes. ?Talked to 80 amputees about their prosthesis. We discussed what kind of conversations they were having. It turned out I wasn?t the only one.?

After winning the Iowa Startup Games, Cole knew she was onto something. She continued to work with JPEC and credits much of her success to the help she got from the center.

?They have a ton of resources and advisors, and I feel they have my back and support, even if not officially,? Cole says. ?They were so welcoming. It was like, ?We?ll teach you everything you need to know.? They really took me under their wing. It made me feel good about the university.?

The next step is to secure a 3D printer able to handle these types of materials in a timely and - more importantly from a business perspective - cost-effective manner.

Cole says she and her business partner, Iowa physics professor James Wetzel, are close to making that a reality.

?We?re in a stage now where we?re doing prototyping,? she says. ?We definitely need a custom 3D printer. The problem with such a large print is often the material cost. Because of a difference in material, printing large volumes is very expensive. Something like a prosthetic cover would be considered large volume. I can keep materials costs a lot lower with my own printer.?

Cole says prosthetic covers are only the starting point of the potential of what she wants to do.

?There?s so much room for advancement in prosthetics, stuff you don?t think about until you?re in that situation,? she says. ?I want to be able to offer covers for amputees who don?t have traditional prosthetics. I want anybody to be able to send me a request and I can print them a socket and they can afford it.?

Cole also has plans to develop an adaptive clothing line for amputees. ?It?s not something you think about, but wearing pants is a completely different experience. I want this to be a starting point. There?s a lot that can be done in the field.?

After talking to other amputees, Cole says it is inspiring to see what can be done. For her, it feels like an opportunity to do anything she wants.

?I thought when I got into that accident, that was it for me,? she says. ?I thought I was gonna die, basically. For me, this has been, ?All right, I have a second chance.? I joked with my friends, I?m gonna rock climb. I?m gonna ballroom dance. I never did this with two legs, so now I?m going to take advantage.?

For Cole, the sky?s the limit and the only direction to go is forward.