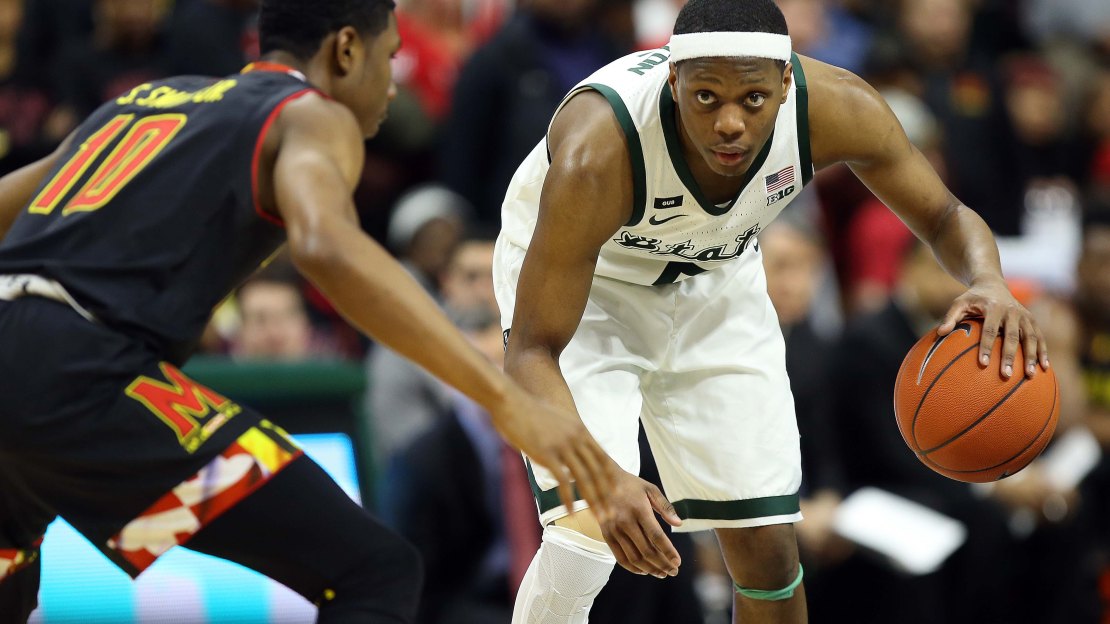 With Michigan suffering its first defeat of the season, coupled with Michigan State's win over previously surging Maryland, there's little debate over who's the top team in the Big Ten.

1. Michigan State (17-2, 8-0). As impressive as the Spartans have been, what's most impressive is that they've done it recently without third-leading scorer Joshua Langford, a leader and a major component to everything they do. Cassius Winston has been terrific.
Last week: 2

2. Michigan (17-1, 6-1). The loss at Wisconsin will allow John Beilein to keep his Wolverines focused on improving. They will grow from the loss and have a better attention to detail, especially on the offensive end.
Last week: 1

3. Maryland (16-4, 7-2). The Terps have a great opportunity to respond following a tough loss to undefeated Big Ten leader Michigan State. This is still a young team that's building and evolving into who it will become. Bruno Fernando avoiding foul trouble is a key to success.
Last week: 3

4. Purdue (12-6, 5-2). I remain concerned about the sustainability, but the Boilermakers do the little things right that set them apart from the rest. Cut hard, screen hard, move the ball, defend and make the 3s–a seemingly simple recipe.
Last week: 9

5. Iowa (16-3, 5-3). While the Hawkeyes are winning games with their offense, it is allowing them to make steady improvements on defense. The key is in getting Tyler Cook back to 100 percent, because he and Garza make up one of my favorite B1G frontcourts.
Last week: 6

6. Wisconsin (12-6, 4-3). The Badgers found something in the second half at Maryland. It was balance. If they are able to get consistent contribution from Brad Davison and Nate Reuvers, this team will continue to compete with the best in the conference.
Last week: 7

7. Minnesota (14-4, 4-3). The Gophers are somehow still below the radar, particularly after the loss at Illinois. I think this team is poised to make a move in the second half of the conference schedule.
Last week: 5

8. Nebraska (13-6, 3-5). At some point the pressure of expectation will settle in and how the Huskers respond will tell us who they are. It comes down to discipline and execution, as the talent is there.
Last week: 8

9. Indiana (12-6, 3-4). The Hoosiers have a lot to address. Inconsistency, lack of continuity and balance on offense and toughness in the midst of adversity. Body language at times tells me they're surprised to see an opponent fight so hard.
Last week: 4

10. Ohio State (12-5, 2-4). The Buckeyes have to maintain focus on their principles, regardless of the outcome of games. It's about taking care of everything you can control to put yourself in the best possible position to win.
Last week: 10

11. Northwestern (11-7, 2-5). At some point, Northwestern is going to begin to win some of these one- or two-possession games. When they do, it could really propel them forward, as confidence and momentum go a long way in the Big Ten.
Last week: 11

12. Rutgers (9-9, 2-6). The Scarlet Knights are much improved, as it displayed in Monday night's victory over a talented Nebraska team. Now, in order to find momentum, the Scarlet Knights need more consistency, both on offense and defense.
Last week: 13

13. Illinois (5-13, 1-6). The Illini have to find a way to bottle up the energy, confidence, swagger and attention to detail that they had at home against Minnesota. They could have beaten anyone in the country that night.
Last week: 14

14. Penn State (7-12, 0-8). The Nittany Lions may be the best winless power conference team. The talent is there, but inconsistency has defined their season. Getting Lamar Stevens going against Minnesota will pay dividends.
Last week: 12