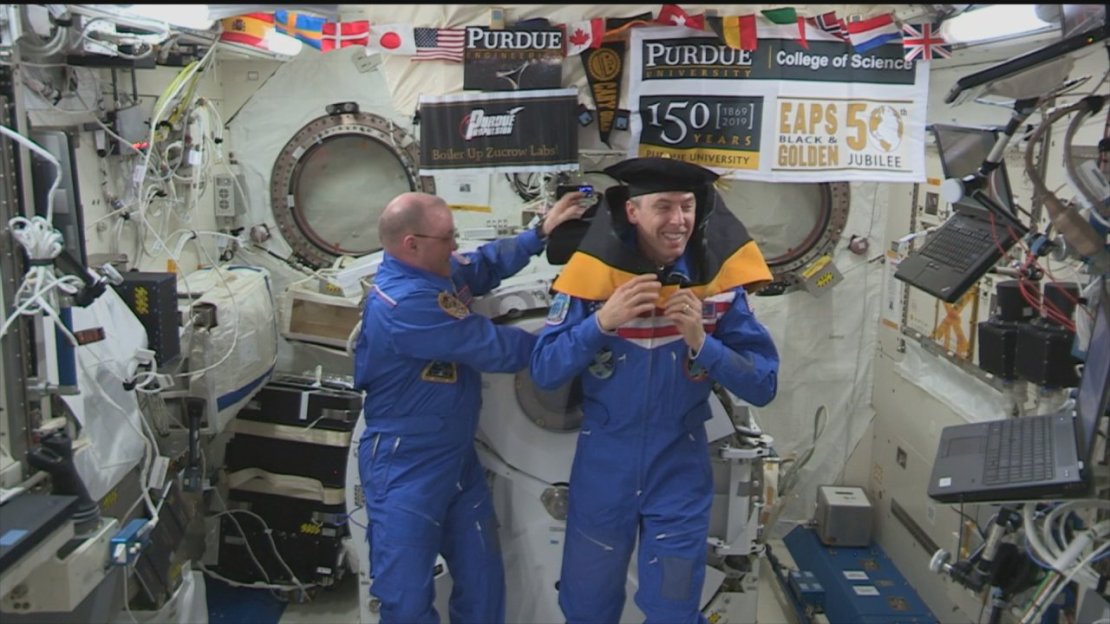 Purdue University holds a special place in Andrew Feustel?s heart. He had a relative graduate from the school in 1905. In the 1960?s, his father and uncle got their degrees in West Lafayette. Feustel himself received both his bachelor?s and master?s degrees from Purdue. It?s where he met his wife of 28 years.

But there is quite another place that calls to Feustel, an odd one given he is a geophysicist with degrees in solid earth sciences and seismology. Feustel is one of the elite alumni of Purdue who have had the experience of rocketing into space as a member of NASA?s Astronaut Corp.

?I?m proud when I talk about the university and I?m proud to be one of the astronauts that represent the school,? Feustel said, speaking with BTN while aboard the International Space Station. ?We?re up to 24 astronauts now that have Purdue heritage, and it?s great to work with those individuals and share stories about being at the school and look forward to future contributions Purdue will make within the space program and space exploration.?

Feustel?s path to the stars was an unconventional one. He?s the first to admit that he wasn?t the best student in grammar and high school. But what he lacked in traditional scholastic skills, he made up for in a keenly curious spirit.

During his college years, he worked as both an automotive mechanic and as a glazier. He served as chairman of the Purdue Grand Prix go-kart race and as Kart driver for the Sigma Phi Epsilon fraternity. To flex his creative muscles, Feustel practiced guitar and took industrial drawing classes. All of this, combined with his years of experience conducting geophysical research, helped secure and have played a major role during his NASA career.

?I think the key there is that we as people need to educate ourselves and have a well-rounded education,? Feustel noted. ?The key isn?t just STEM. I think we?ll see in the future with astronauts, as humans begin to explore space further and live in space, that arts will become just as important as science, technology, engineering and mathematics.?

Feustel has travelled to space an astounding total of three times. His first two missions were aboard the space shuttle, including one mission to repair and upgrade the Hubble Space Telescope. His most recent saw him take command of the International Space Station. While aboard, he and his crewmates performed a variety of tasks, from maintaining the orbiting lab to executing research projects for researchers back on earth.

The icing on the cake, though, was a special ceremony recognizing Feustel?s achievements as a distinguished Purdue alum. Live, via video uplink, he was bestowed an honorary doctorate during the university?s commencement ceremony - and was hooded by his crewmate and fellow Boilermaker astronaut Scott Tingle.

?I can tell you that of all the events that I?ve done, of all the outreach, of all the interviews I?ve done, that was probably the most significant for me,? said Feustel. ?My heart was beating quite strong and was sort of taking my breath away as I was accepting the degree. I appreciate what President [Mitch] Daniels did at the university to make that happen and allow not only for me to receive the degree, but also to share that moment with the graduating class and try to impress upon them the importance of what they had just achieved and what their future may hold for them.?

Feustel often shares his experiences and story with young people. He actively engages with the general public on social media, posting photos taken in and from space in order to inspire others to dream big and never underestimate the power of their own potential.

?I want people to believe that their possibilities are limitless. I didn?t do well in high school, I started in community college and worked as a mechanic,? Feustel noted. ?Those things all shaped me, shaped my life, helped me realize what I could do, what my potential might be. I pursued the things that I liked. I enjoyed geology and geosciences; I felt that I was good at it and by being good at it, I became recognized in the field and I think that made me a good candidate for becoming an astronaut. Keep up the good work, the sky is not the limit and don?t ever lose sight of your goals.?