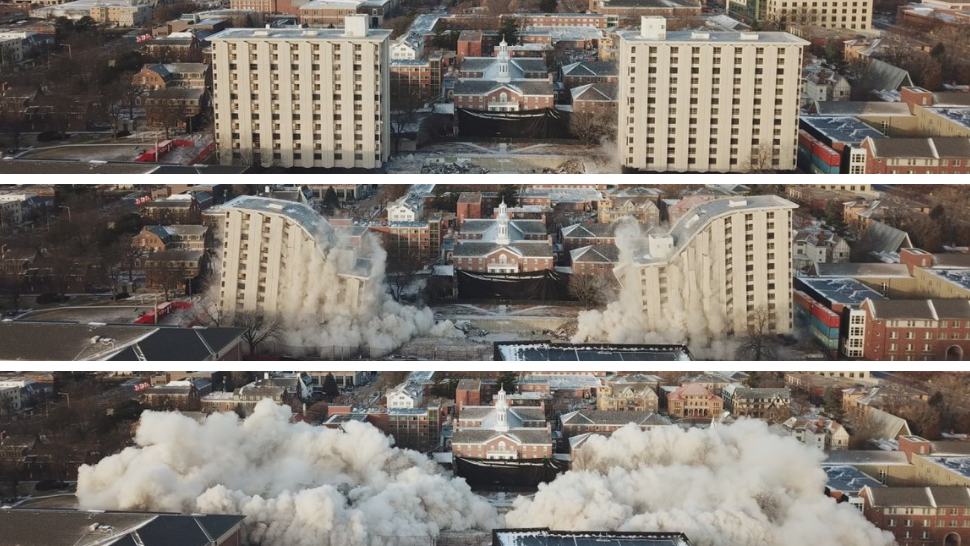 One minute, they towered 13 stories high; the next, they were no more than a 30-foot high pile of concrete and rebar strewn rubble.

Such was the spectacular end of the Cather and Pound Dorms on the campus of the University of Nebraska-Lincoln. Expertly timed explosions felled the 54-year-old dormitory complex that had at one time been the picture of modernity and within whose walls thousands upon thousands of Huskers resided.

Age, though, took its toll, and Cather and Pound became just too old to maintain, too expensive to renovate and simply a poor fit for the campus' current needs. The decision was made to demolish the dual towers, but they still had a bit of unexpected utility left for the university they faithfully served.

"What we wanted to do was to latch on to this opportunity," says Christine Wittich, assistant professor in the Department of Civil Engineering at Nebraska, "to really leverage it to our advantage, to study how exactly does a building collapse, how exactly do individual components interact with the structure and what, ultimately, does the significant response and collapse of one building have on all of the surrounding structures."

To accomplish this, a team of engineering faculty, staff and students led by professor Daniel Linzell and assistant professor Richard Wood, outfitted both Cather and Pound as well as surrounding structures with an intricate array of sensors. These highly sensitive instruments recorded all elements of the collapse in real time, including how the structural elements affected one another, how the buildings accelerated and moved in their descent and what stresses came to bear on nearby buildings. The team also used high resolution video cameras on the ground and in a fleet of drones to capture the event from every angle.

The focus of Linzell's research is understanding how buildings and other major structures, notably bridges, respond to extreme stress loads, such as blasts or impacts. Understanding exactly how Cather and Pound reacted during the implosion will allow structural engineers to develop more durable buildings and infrastructure. The information collected will also be made available to researchers and engineers globally who are interested in improving safety and longevity in structural construction.

The importance of the investigation of the Cather and Pound demolition was not limited to the professional research and engineering communities, though. As Wittich points out, it was an incredible opportunity for students to gain hands-on data collection experience surrounding a rare event.