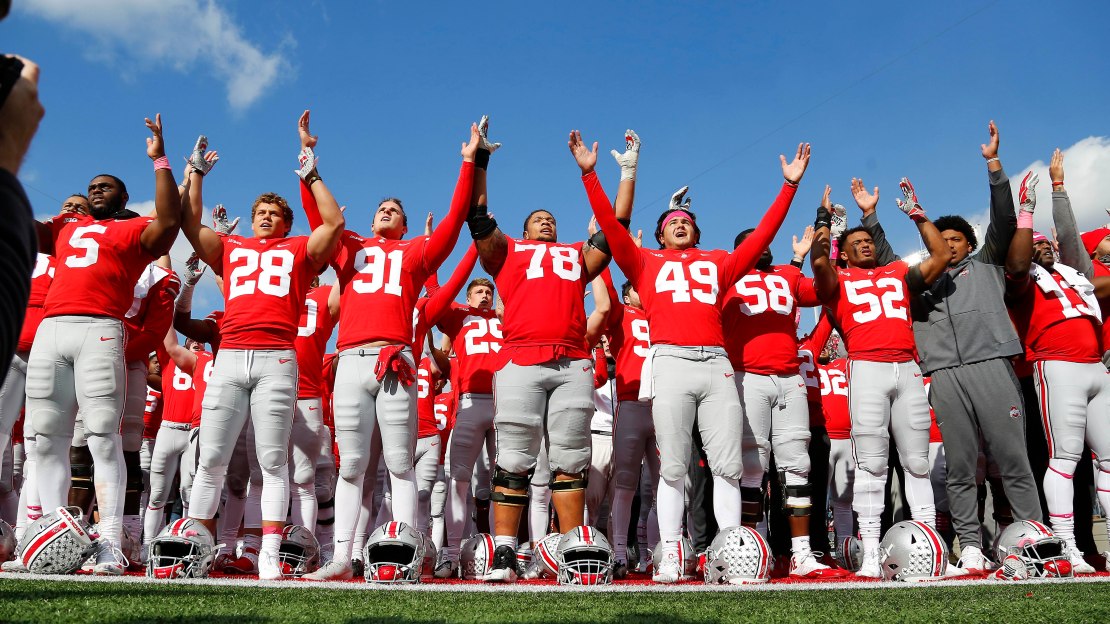 It was quite a season and now there are two teams left for the Big Ten title game. I present to you my Big Ten Power Rankings, presented by ArcelorMittal.

I predict the Buckeyes will be No. 6 in the CFP Rankings come Tuesday night. Ohio State beat Michigan 62-39 on Saturday. The 62 points was the most points scored by Ohio State in this rivalry. The previous high was 50 points. Dwayne Haskins was the star as he threw 6 TD passes, 2 of which were to freshman WR Chris Olave, his first two of the season. Olave also had a huge punt block that was scooped up for a TD that really changed the game. Haskins now has 42 TD passes for the season which is a Big Ten record, passing Drew Brees. The speed on the perimeter for OSU was the difference maker for the Buckeyes. They now will have a chance to win back to back Big Ten Titles. UP NEXT: Ohio State plays Northwestern Saturday on FOX.

Michigan lost to Ohio State 62-39 in Columbus on Saturday. The top-rated defense in the country allowed the most points ever in the Ohio State-Michigan series. The top-ranked pass defense allowed more by halftime than it was averaging per game all season. That defense allowed 567 total yards. Shea Patterson threw for 187 yards and 3 TD for Michigan. The Wolverines will likely still get to a New Years Six Bowl and possibly the Rose Bowl if OSU gets into the CFP. Jim Harbaugh is now 0-4 against Ohio State.

Penn State beat Maryland 38-3 on Saturday. Trace McSorley accounted for 3 TD on senior day. He was 12-22 for 230 yards. McSorely also had 11 carries for 64 yards as well. Miles Sanders had a nice Saturday as well gaining 128 yards on 14 carries. The Nittany Lions defense lived in Maryland's backfield getting 5 sacks and 15 tackles for loss. They were able to shut down Maryland's vaunted rushing attack holding the Terps to just 74 rushing yards. The win gives the Nittany Lions a chance at a New Years Six bowl game.

Northwestern beat Illinois 24-16 on Saturday to keep the Land of Lincoln trophy in Evanston. Isaiah Bowser had a big day rushing for 166 yards on 18 carries. Clayton Thorson accounted for 3 TD on senior day. He threw two TD passes and also scored on a QB sneak. Thorson finished 12-18 for 110 yards and 2 TDs. Northwestern was in control most the game until a late push by Illinois. Sophomore LB Paddy Fisher came up with a huge INT in the fourth quarter to seal the win. Northwestern will head to Indy to play OSU, a team which they?ve only beaten once since 1972. UP NEXT: Northwestern plays Ohio State Saturday on FOX.

Iowa beat Nebraska 31-28 on Friday. Kirk Ferentz made a questionable decision to fake a FG on Nebraska's three-yard line up 28-13 late in the third Quarter. They failed on the attempt and ended up blowing a 15-point lead in that second half. However, Miguel Recions drilled a 41-yard FG as time expired to get the win for Iowa. Mekhi Sargent ran for a career high 173 yards and scored twice for Iowa. The Hawkeyes have won four straight vs. Nebraska.

Wisconsin lost to Minnesota 37-15 on Saturday. It was the first loss to Minnesota in 14 years, and the first loss at home to the Gophers since 1994. Alex Hornibrook started at QB for the first time since missing two games while in concussion protocol. He threw three INT and lost a fumble on a sack that led to 24 points for the Gophers. Jonathan Taylor had 19 carries for 120 yards as the nations leading rusher continued his impressive season. The Badger defense allowed 152 yards rushing on 33 carries in the second half and allowed Minnesota to go 5 of 9 on third down. This one will hurt as they have to wait a year to try to reclaim the Axe.

Nebraska lost to Iowa 31-28 in Iowa City on Friday. The Cornhuskers were down 28-13 after three quarters and rallied off to tie the game. Ultimately it wasn?t enough as Iowa hit the game-winning FG as time expired. Adrian Martinez finished his last game of his freshman year with 260 yards and 2 TD. The last time Nebraska has won this rivalry was 2014. However, the future is bright in Lincoln, Nebraska as Scott Frost has a QB and some young talent to build with.

Michigan State beat Rutgers 14-10 on Saturday. The Spartans were trailing in the 4th quarter until 3:57 when Cody White scored on a end around for the Spartans to take the lead. The Spartans Josiah Scott intercepted Rutgers Giovanni Rescigno at their own 3-yard line with 1:32 to play to seal the win. The win wasn?t impressive by any means for MSU. Rocky Lombardi started for the injured Lewerke and went 19-43 for 173 yards 1 TD and 1 INT. Connor Hayward carried it 18 times for 81 yards. Joe Bachie led the Spartans with 12 tackles, 1.5 for loss. MSU awaits the bowl announcements.

Purdue beat Indiana 28-21 in Bloomington on Saturday. The win keeps the Old Oaken Bucket in West Lafayette for another year. The Boilermakers were able to beat their rival despite the rumors surrounding Jeff Brohm and the Louisville job, making them bowl eligible for the second straight year. David Blough threw 3 TD passes. Rondale Moore tied a school record with his seventh 100-yard game of the season. Moore finished with 141 yards on 12 receptions. Purdue now waits to see what bowl game they will get and what their head coach will do.

Minnesota beat Wisconsin 37-15 on Saturday. The win not only made the Golden Gophers bowl eligible, but it brought home Paul Bunyan's Axe for the first time in 14 years. Mohamed Ibrahim ran for 121 yards and a TD for Minnesota. Bryce Williams ran for two TD?s in the fourth quarter, both of which came on two Alex Hornibrook turnovers. Tanner Morgan got the start at QB for Minnesota going 9-16 for 124 yards. Minnesota?s defense was able to force Hornibrook into 4 turnovers, 3 INT and losses fumble that led to 24 Gopher points. This was Minnesota?s first victory in Madison since 1994.

Indiana lost to Purdue 28-21 on Saturday. The Old Oaken Bucket will remain in West Lafayette. Indiana lost 6 of it?s last 7 games and fell short of becoming bowl eligible. Stevie Scott led the Hoosiers in rushing with 20 carries for 104 yards and 1 TD. That gave Scott the school record with six 100 yard games by a true freshman. Peyton Ramsey was 36-51 for 345 yards and 1 INT. The offseason for the Hoosiers will be filled with questions on how to get to the postseason again.

Maryland lost to Penn State 38-3 in Happy Valley on Saturday. The loss killed Marylands hopes of going bowling despite an extremely difficult season off the field in College Park. Maryland could not block Penn State?s defense as they gave up five sacks and 15 tackles for loss. Anthony McFarland was held in check only gaining 12 yards on 6 carries and Javon Leake had 34 yards on 11 touches. Tyrrell Pigrome was 14-23 for 185 yards and the Terrapins weren?t able to find the end zone. Who will be the next coach at Maryland will be the focus now.

Illinois lost to Northwestern 24-16 on Saturday in Evanston. AJ Bush had a career day passing going 23-39 for 281 yards 1 TD and 1 INT. His WR?s dropped a couple key would be TD passes as well. Ricky Smalling was his favorite target with 7 receptions for 72 Yards an 1 TD. Reggie Corbin did play for Illinois and had 13 carries for 78 yards. Illinois pulled within 8 in the 4th quarter but AJ Bush?s INT in NU territory sealed the game for Northwestern. Illinois will end it?s season without a bowl appearance.

Rutgers lost to Michigan State 14-10 in East Lansing. Rutgers had a 10-7 lead until 3:57 to play when Cody White of MSU scored on a end-around. Rutgers QB Giovanni Rescigno was 9 for 17 for 109 yards, one TD and one INT. His TD pass was to Travis Vokolek, who led the Scarlet Knights in receptions (4) and receiving yards (69). The leading rusher was Rescigno with 61 yards as MSU held Pacheco to just 38 and Blackshear to six yards. Rutgers finishes winless in the Big Ten.