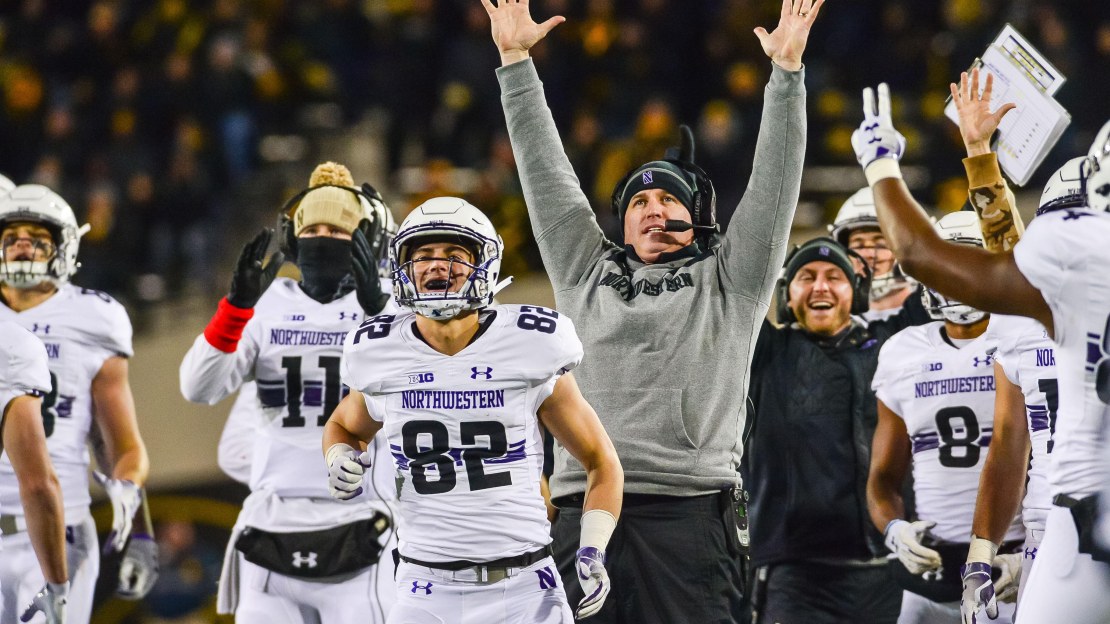 How will this shake out by the end of the season? Plenty of football left.

Michigan will most likely stay at No. 4 in the CFP Rankings – Michigan beat Rutgers 42-7 on Saturday. Michigan was lead by the steady QB play of Shea Patterson, who was 18-27 for 260 yards and 3 TDs. A pair of those TD passes went to Nico Collins, one of which was on busted coverage by Rutgers. The Wolverines were able to run for 193 yards as a team and 3 TDs. Their pass defense smothered Rutgers only giving up 59 yards through the air. The Wolverines did give up 193 rushing yards on the day, but 80 yards of them came on one run. The rest of the day Rutgers ran 32 times for 113 yards.

UP NEXT: Michigan plays Indiana Saturday at 4 p.m. on FS1

Ohio State beat Michigan State 26-6 on Saturday. In what was a cold, windy day, the Buckeyes relied on defense and elite special teams to secure this win. Drue Chrisman?s first punt only went 4 yards. After halftime Chrisman pinned MSU at the 5, 6, 3, 1 and 2 yard line. One of those punts forced Michigan State to take an intentional safety instead of punting from the 1. Dwayne Haskins threw for 227 yards and 1 TD, and moved into 2nd on the single season passing yards record, just 50 yards behind Joe Germaine.

UP NEXT: Ohio State plays at Maryland Saturday at noon on ABC

Penn State beat Wisconsin 22-10 on Saturday. The Nittany Lions formula was a heavy dose of Miles Sanders. Sanders was able to run for 159 yards and a TD on 23 carries. Trace McSorley got his 29th W at QB for the Nittany Lions, tying him with Todd Blackledge for the program record. McSorley still seems to be bothered by his knee injury. He finished going 19-25 for 160 yards and a TD in cold and windy conditions.

UP NEXT: Penn State plays Rutgers at noon on BTN.

Northwestern beat Iowa 14-10 on Saturday. The win, along with Wisconsin and Purdue losing, allowed the Wildcats to clinch the Big Ten West and guarantee a spot in Indy on December 1 for the first time. The win also made Northwestern bowl eligible. Isaiah Bowser continues to be a surprise for this team rushing for 165 yards and a TD. The impressive thing is Northwestern has been able to keep winning despite Clayton Thorson not having great stats. Thorson was just 15-30 for 122 yards 1 TD and 2 INTs.

UP NEXT: Northwestern plays at Minnesota at noon on BTN.

Michigan State lost to Ohio State 26-6 on Saturday. The Spartans were trailing 7-6 in the 3rd quarter until choosing for an intentional safety after being forced to punt from their own 1. That made it 9-6. The Spartans never could flip field position the entire second half. They had drive starts of 5, 6, 3, 1 and 2 yard line. Brian Lewerke started, then was pulled for Rocky Lombardi, then put back in to finish the game. The Spartans couldn?t get anything going consistently and a fumble in their own end zone, that was recovered by Ohio State, ended up sealing the game.

UP NEXT: Michigan State plays at Nebraska at noon on FOX.

Wisconsin lost to Penn State 22-10 on Saturday. The loss officially eliminated the Badgers from the Big Ten West. Jonathan Taylor ran 20 times for 185 yards and a TD for the Badgers, with 71 of that total coming on a TD run on their first possession. Jack Coan got the start for the injured Alex Hornibrook and went just 9-20 for 60 yards and 2 INT. He was also sacked 5 times on the afternoon and hit a couple more.

Iowa lost to Northwestern 14-10 Saturday. The loss eliminated the Hawkeyes from the Big Ten West race. The Hawkeyes shut out Northwestern in the first half and were up 10-7 after 3 quarters. Iowa took that lead behind a 28 yard TD pass from Nate Stanley to Ihmir Smith-Marsette. However, the defense wasn?t able to hold up as they allowed a 32 yards TD pass to Bennett Skowronek in the 4th quarter. Iowa lost two fumbles on the evening that contributed to the loss.

Nebraska beat Illinois 54-35 on Saturday. The Cornhuskers forced five turnovers that turned into 24 points to give them their 3rd win in four games. The Huskers racked up 606 total yards against Illinois. Sensational freshman QB Adrian Martinez accounted for 4 TD and 345 yards of total offense while Devine Ozigbo ran for 162 yards and 3 TDs. Stanley Morgan Jr. moved to No. 2 on the schools all time Receiving list behind Kenny Bell.

UP NEXT: Nebraska plays Michigan State at noon on FOX

He ripped off two career-long runs on his way to a career-high three touchdown day on Saturday.

Indiana beat Maryland 34-32 on Saturday. Logan Justus hit a 42-yards FG with 2:32 to play to give Indiana the lead. On the next possession Nile Sykes recovered a Tyrell Pigrome fumble to seal the W for the Hoosiers. Stevie Scott carried the ball 19 times for 103 yards and a TD for IU. The win was big one for Indiana?s bowl hopes. They need to get one more win in the final two games at Michigan and v. Purdue.

Purdue lost to Minnesota 41-10 on Saturday. This loss was one of the most surprising of the weekend as the Purdue Offense was held to just 233 total yards of offense, which was a season low. The Boilermakers defense allowed 265 yards on the ground the Gophers in what was a cold game in Minneapolis. Purdue entered the game second in the conference getting 35.8 points a game but they were held to just 10 on Saturday. The temp was 21 degrees at kickoff at TCF Bank Stadium. Purdue is still in need of a win to get to bowl eligible.

Maryland lost 34-32 to Indiana on Saturday. The loss was a tough blow the the Terps who are one win away from bowl eligibility. This game was their best chance as they finish the season with Ohio State and at Penn State. The Terps had a career day from Anthony McFarland who ran 29 times for 210 yards in relief of Ty Johnson who was injured in the first quarter. Kasim Hill left the game for Maryland in the second quarter and Tyrell Pigrome came in and went 10 of 13 for 146 yards and one TD but he lost a fumble to seal the game on the last possession for the Terps.

UP NEXT: Maryland plays Ohio State at noon on ABC.

Minnesota beat Purdue 41-10 on Saturday. The temp at kickoff was 21 degrees in Minneapolis. One week after a terrible defensive performance against Illinois which led to the firing of DC Robb Smith, the Gophers came out and held Purdue to a season low 233 total yards. This Gopher team had been alloweding 43.2 points a game and 507.7 yards per game coming in. Mohamed Ibrahim ran for 156 yards and QB Seth Green had a TD run and a TD Pass. Black Cashman also forced a fumble and returned it 40 yards for a TD.

UP NEXT: Minnesota plays Northwestern at noon on BTN.

Illinois lost to Nebraska 54-35 on Saturday. The bigger loss was Reggie Corbin left the game in the second quarter and did not return. Illinois turned it over five times which led to 24 Nebraska points. AJ Bush fumbled and was intercepted twice against his old team. However Bush did rush for a Illinois QB record 187 yards and three TDs on 25 carries. Illinois gained 509 yards but couldn?t overcome the mistakes to keep pace with Nebraska and it?s 606 total yards. –

Rutgers lost to Michigan 42-7 on Saturday. Michigan was just too much for the Scarlet Knights. Rutgers was held to just 59 yards through the air against the nation?s best pass defense. However Rutgers rushed for 193 yards that included a 80-yard TD run by Isaih Pacheco in the first quarter. Pacheco finished with 16 carries for 142 yards. Rutgers leading receiver was Giovanni Rescigno on a trick play.

UP NEXT: Rutgers plays at Penn State Saturday at noon on BTN.