Big Ten Power Rankings: What could change down the stretch? 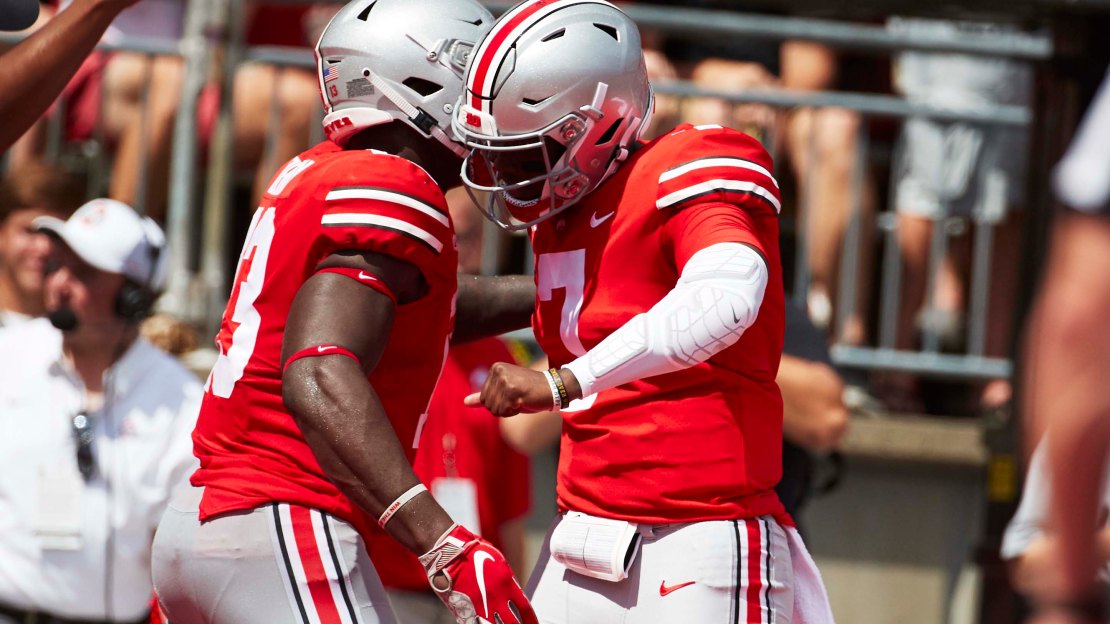 Each week I lay out my Big Ten Power Rankings, presented by ArcelorMittal.

We're headed down the stretch here and there is plenty of time for things to change.

Watch my video and read my work below. Agree? Disagree? let me know.

Michigan beat Penn State 42-7 on Saturday. Don Brown's Wolverine defense shut down Penn State all game long. It wasn't until late in the fourth that the Wolverines finally allowed any points. That defense held Penn Sate to 186 total yards and forced three turnovers, one of which went for a TD thanks to Brandon Watson. The defense also had 5 sacks on the day. Karan Higdon ran for 132 yards and the Wolverines have beat three straight ranked teams in the same season for the first time since 1997, same season as their last national title.

UP NEXT: Michigan plays at Rutgers Saturday at 3:30 pm ET on BTN.

Ohio State beat Nebraska 36-31 Saturday in Columbus. The Buckeyes were trailing the Cornhuskers 21-16 at halftime. A lot of the same issues that hurt Ohio State over the past few weeks re-emerged in the first half, with the defense allowing too much to opposing offenses and poor running game. However in the second half the defense forced five straight punts. JK Dobbins also had his second 100 yard game of the season for OSU ending up with 163 yards on the day.

UP NEXT: Ohio State plays at Michigan State at Noon ET on FOX.

Michigan State beat Maryland 24-3 in College Park on Saturday. They won behind the legs of Connor Heyward, who ran for 157 yards and 2 TDs to help the Spartans become bowl eligible for the 11th time in the last 12 years. The Spartan defense held Maryland to just 100 total yards on the day. The Spartans run defense continues to be nasty holding Maryland to 26 yards rushing and .9 yards per carry. Brian Lewerke got the start for MSU but only went 11/20 for 87 yards and 1 INT.

UP NEXT: Michigan State plays Ohio State at Noon ET on FOX.

Penn State lost to Michigan 42-7 on Saturday. The Nittany Lions didn't score until 1:59 left in the ball game. They were held to just 186 total yards on the day. Trace McSorely, who had a great day a year ago against the Wolverines, was held to just 5/13 for 83 yards and 1 INT. Tommy Stevens was Penn State's leading rusher. James Franklin and the Nittany Lions have lost three of their last five games, dropping another road game to a ranked team.

UP NEXT: Penn State plays Wisconsin at Noon ET on ABC.

Iowa lost to Purdue on Saturday 38-36. The Hawkeyes regained the lead late in the fourth quarter but could not hold on as Spencer Evans of Purdue hit the game winning FG with eight seconds left. The nations No. 2 scoring defense allowed a season high point total to Purdue on Saturday. Nate Stanley had a good day going 21 of 32 for 275 yards and 1 TD. He also ran for a score. This loss hurts the Hawkeyes hopes of winning the Big Ten West.

UP NEXT: Iowa plays Northwestern at 3:30 pm ET at FOX.

Northwestern lost to Notre Dame 31-21 on Saturday night. The loss to the Irish puts the Wildcats at 0-3 in non conference games this season and hands Northwestern their fourth loss of the season. Northwestern had brought the game to 3 in the fourth quarter but the injuries to the secondary proved too much for the Wildcats. When Jared McGee and Trae Williams both went down, ND QB Ian Book threw for 236 yards and 2 TD. This loss doesn't mean anything when it comes to winning the Big Ten West. It still holds a two-game lead over Iowa and hold tiebreaker with Wisconsin and Purdue.

UP NEXT: Northwestern plays at Iowa at 3:30 pm ET at FOX.

Purdue beat Iowa 38-36 on Saturday. The Boilermakers' Spencer Evans kicked the game winning FG with eight seconds left to get the W. David Blough had a nice bounce back game throwing for 3 TD and topping the 300 yard mark for the fifth time this season. WR Terry Wright had a monster day for Purdue with 6 receptions for 146 yards and 3 TD. Purdue is 3-1 against ranked teams and one win from being bowl eligible. The Big Ten West is still on the table for Purdue as well.

Wisconsin beat Rutgers 31-17 on Saturday. The Badgers became bowl eligible for the 17th consecutive season behind Jonathan Taylor's big day on the ground. The outstanding sophomore running back carried the ball 27 times for 208 yards and 3 TD. The Badgers ran the ball for over 300 yards in this football game and were able to wear down the Scarlet Knights defense as the game went on. They did however lose Alex Hornibrook late in the 4th quarter as his head bounced off the turf. He didn't return in the second half.

UP NEXT: Wisconsin plays at Penn State at Noon ET on ABC.

Maryland lost to Michigan State 24-3 on Saturday. It has been a tough week emotionally for the Maryland football program. With everything that's gone on, it's a lot to ask young kids to continue to focus on the task at hand. Maryland only mustered 100 total yards after an explosive game vs. Illinois a week ago. A key play when Byron Cowart got an interception and then fumbled it into MSU end zone for a touch back. That could've pulled the game within 7 with 11 minutes to go. Maryland is 1 win away from being bowl eligible.

UP NEXT: Maryland plays at Indiana at Noon ET on BTN.

Nebraska lost to Ohio State 36-31 on Saturday. This was a moral victory for Scott Frost and the Cornhuskers. It shows his Nebraska football team has shown growth over the last few weeks. The Cornhuskers had the lead in the first half and pulled within five with three minutes left. Adrian Martinez had another solid game as he threw for 266 yards and a TD, while also rushing for two more. Signs are pointing to a bright future in Lincoln.

UP NEXT: Nebraska plays Illinois at Noon ET on BTN.

Adrian Martinez racked up some serious numbers for @HuskersFBNation. That's why the QB is #B1G Co-Freshman Player of the Week. pic.twitter.com/lxeXtVLvYP

Indiana had a bye week this week.

UP NEXT: Indiana plays Maryland at Noon ET on BTN.

Illinois beat Minnesota 55-31 on Saturday. Reggie Corbin rushed for 213 yards and 2 TD for the Fighting Illini. Both his TD runs were over 70 yards. He was the first Illinois player to have two 70+ yard rushing TD in the same game since 1944. Overall the Fighting Illini were able to run for 430 yards and 5 TD. Lovie Smith took over the defensive plays calls and the Fighting Illini defense played better than it had in the past few weeks.

Up Next: Illinois plays at Nebraska at Noon ET on BTN.

Minnesota lost to Illinois 55-31. This loss hurt the Gophers bowl chances. The Gopher defense couldn't stop the run allowing 430 yards and 5 TD on the ground. Tanner Morgan was the starting QB for the 2nd straight game for injured started Zack Annexstad. He went 14/27 for 258 yards and 2 TD. For the Gophers to go bowling they'll need to win 2 of the final three against Nebraska, Iowa, and Wisconsin.

Rutgers lost to Wisconsin 31-17 on Saturday in Madison. The score was only 10-0 Wisconsin at halftime as the Scarlet Knights were able to intercept Alex Hornibrook twice in the first half. Saquon Hampton got both interceptions for Rutgers. The safety had a good day ending up with 10 tackles,  one for loss, one PBU and two INTs. Rutgers also got a big game from Raheem Blackshear ending up with eight receptions for 162 yards and a TD. Some small bright spots in suffering their 8th straight loss.