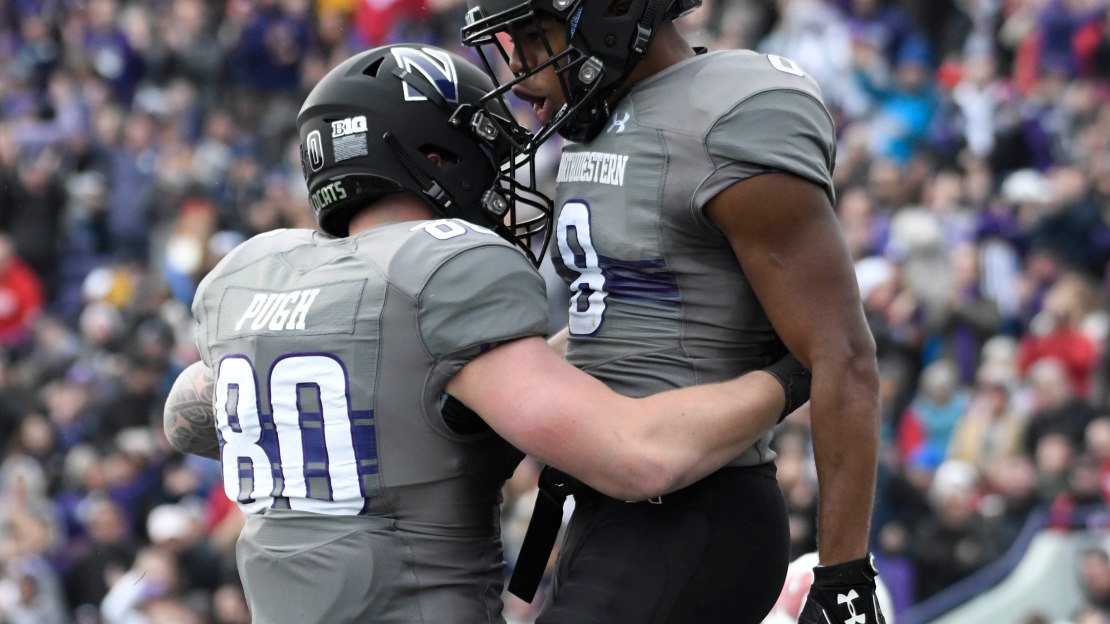 With the top two teams enjoying bye weeks, there was little movement at the very top of my Big Ten Power Rankings, presented by ArcelorMittal.

But there was plenty of shuffling between Nos. 3-8 as Penn State narrowly edged Iowa, Michigan State snapped Purdue's four-game win streak and Northwestern tightened its grip on the Big Ten West with an upset of Wisconsin.

3. Penn State (6-2, 3-2). Penn State beat Iowa 30-24 on Saturday. The Nittany Lions fell behind 12-0 before getting anything going. They also survived a scare when QB Trace McSorley went down with an injury and came out of the game for three series in the second quarter. McSorley had to convince James Franklin he could go in the second half, and he delivered with a 51-yard touchdown run. Penn State avoided a three-game home losing streak with the win.
Last week: 4
Up next: at Michigan.

4. Iowa (6-2, 3-2)
Iowa lost to Penn State 30-24 on Saturday in State College. QB Nate Stanley threw two interceptions–none more impactful than one late in the fourth quarter in the red zone. The Hawkeyes jumped out to a 12-0 lead, which included two safeties. Iowa also scored on a fake field goal as well and converted a pick six, but it wasn't enough to hold off the Nittany Lions. Iowa still has a chance to win the West, but it needs help.
Last week: 3
Up next: At Purdue

5. Michigan State (5-3, 3-2). Michigan State beat Purdue 23-13 on Saturday afternoon. Mark Dantonio was able to bounce back again as he got his team fired up following a disappointing loss to Michigan. Without star WR Felton Davis and QB Brian Lewerke, the Spartans came ready to play behind backup QB Rocky Lombardi. The defense forced three interceptions and shut down Purdue's explosive offense. Lombardi threw for 318 yards and two TDs and embodied the Spartan trend of always showing up and playing hard despite injuries under Dantonio.
Last week: 6
Up next: at Maryland

He had a game to match the name.

6. Northwestern (5-3, 5-1). Northwestern beat Wisconsin 31-17 on Saturday as they were able to shut down Badger RB Jonathan Taylor and force two fumbles from the phenomenal sophomore. Cats QB Clayton Thorson seems to be 100 percent as he ran for two TDs and threw for one. Freshman RB Isaiah Bowser had his second straight 100 yard rushing game, and Pat Fitzgerald continues to do an amazing job with the Wildcats. Northwestern now has 1.5 game lead over Wisconsin, Purdue, and Iowa in the Big Ten West race.
Last week: 8
Up next: vs. Notre Dame

7. Purdue (4-4, 3-2). Purdue lost to Michigan State 23-13 Saturday in East Lansing. The Boilermakers had an offensive letdown coming off the big win against Ohio State, as David Blough threw three interceptions. Running back DJ Knox wasn't able to get going either, as he had just seven carries for 51 yards. The Purdue defense struggled as well, and the loss ended Purdue's four-game wining streak.
Last week: 7
Up next: vs. Iowa

8. Wisconsin (5-3, 3-2). The Badgers lost to Northwestern in a disappointing performance. Quarterback Alex Hornibrook wasn't able to go due to a concussion and backup Jack Coan went 20-31 for 158 yards and a TD in his place. Jonathan Taylor lost two fumbles during the game and Coan lost one, contributing to 17 points for the Wildcats. This is Wisconsin's second loss in 3 games, and chances to get back to Indy took a hit.
Last week: 5
Up next: vs. Rutgers

9. Maryland (5-3, 3-2). Maryland thumped Illinois 63-33 on Saturday. The Terrapins got a monster game out of Javon Leake, who had five carries for 140 yards and three TDs, plus a 97-yard kick return for a TD. Quarterback Kasim Hill had his best day as well, going 11-19 for 265 yards and three touchdowns. Despite the circumstances surrounding this program, Matt Canada has the Terrapins one win away from being bowl eligible.
Last week: 9
Up next: vs. Michigan State

Javon Leake (@ny_king20) introduced himself to the @B1Gfootball world Saturday.

The @TerpsFootball RB entered the Illinois game with 66 yards rushing on the season. He racked up 140, plus three rushing TDs and a 97-yd kick return TD to earn both OPOTW and STPOTW honors: pic.twitter.com/qja8o9bM68

10. Nebraska (2-6, 1-4). Nebraska hammered Bethune-Cookman 45-9 on Saturday in Lincoln. This game was scheduled because of the Week 1 rainout vs. Akron. The Husker starters only needed to play the first half, as Adrian Martinez threw for 213 yards and a pair of TDs. Running back Devine Ozigbo ran for 110 yards, and both of Nebraska's stud wideouts got involved as Stanley Morgan and JD Spielman had big games.
Last week: 11
Up next: at Ohio State

11. Minnesota (4-4, 1-4). Minnesota held off Indiana 38-31 at TCF Bank Stadium on Friday night. The Golden Gophers were able to win despite their starting QB and RB sitting out due to injury. Backup QB Tanner Morgan earned Big Ten Co-Freshman of the Week honors, going 17-24 for 302 yards and three TDs in his first start. Indiana scored 22 unanswered points in the fourth quarter, but Minnesota held on in a game that kept the Gophers' bowl hopes alive and well.
Last week: 12
Up next: at Illinois

12. Indiana (4-5, 1-5). Indiana fell at Minnesota despite storming back to tie Minnesota after being down 31-9 in the fourth quarter. They scored 22 unanswered points, but fell 38-31. The Hoosiers defense struggled, allowing 482 yards to the Gophers offense. This was a damaging game for the Hoosiers' bowl hopes as they need two wins in their final three games (Maryland, at Michigan, Purdue) to make the postseason.
Last week: 10
Up next: Idle (vs. Maryland 11/10)

13. Illinois (3-5, 1-4). Illinois lost 63-33 to Maryland in College Park on Saturday. Quarterback MJ Rivers got the start and ended up going 3-13 for 45 yards before leaving due to injury. The Illini offense still put up 33 points, but it wasn't nearly enough as their defense allowed over 700 yards and 63 points to the Terps. Illinois' bowl hopes took a major hit with the loss.
Last week: 13
Up next: vs. Minnesota