Michigan is perfecting energy that is literally green: BTN LiveBIG 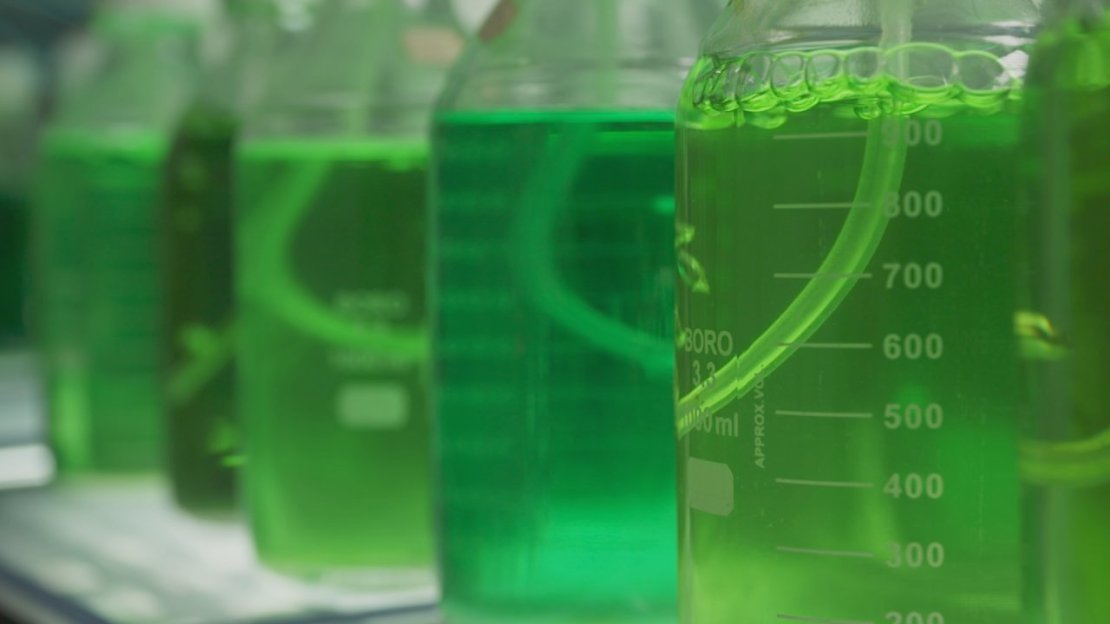 According to University of Michigan Professor Bradley Cardinale, when it comes to energy, humans are still acting quite a bit like the hunter-gatherers of the past. ?We run around poking holes in the ground hoping some gas or oil springs up,? says Cardinale, who works in Michigan?s School for Environment and Sustainability.

To be a sustainable society, though, we?re going to have to move away from hunting for our energy and figure out ways to cultivate it.

To that end, Cardinale and a team of researchers, including ecologists, evolutionary biologists, chemical engineers and mechanical engineers, are looking to perfect a system that derives fuel from a most mucky material: algae.

Microorganisms that live in lakes and oceans, algae produce compounds that are combustible, such as fatty acids, carbohydrates and proteins. One simply needs to harvest these compounds and refine them into a fuel that can power an engine or a turbine. Of course, nothing is ever quite as simple as it seems.

?Most research in algal biofuels tries to genetically modify organisms that we can grow well in the safety of the lab,? Cardinale explains. ?But, when you go out in open ponds at large scales - where we?re going to have to cultivate our algae for true biofuel production - Mother Nature throws all sorts of problems at you: weather fronts, disease, etc.?

The Michigan team?s approach to cultivating algae varietals that produce worthwhile and consistent amounts of biofuel compounds involves working with, rather than against, nature. They?re combining highly productive algae species with those that have been shown to be particularly resistant to disease and/or weather changes. The result is an algae pond that is always producing biofuel compounds, regardless of change.

The biofuel compounds produced by the algae don?t mean much, though, if they can?t be converted to biocrude and, from there, a working biofuel. It is in this area that the chemical and mechanical engineering members of the team are hard at work.

First, the myriad compounds produced by various strains of algae need to be analyzed by the chemical engineers in order to understand how they combust and function in an engine as well as what sorts of pollutants they give off - creating as clean-burning a fuel as possible is a paramount goal of this project.

?We want to find solutions for bioenergy production that don?t come at the cost of other impacts to the environment,? says Michigan research scientist Casey Godwin. ?We?re looking to make something that?s sustainable not only in terms of making a lot of fuel, but having low environmental impacts as well.?

The next step in the process is for mechanical engineers to look at how alterations to certain fuel properties can lead to optimized engine combustion via numerical analysis, simulation and experimentation on an actual diesel engine.

?One of our initial tasks is to lay out a kind of surrogate to represent what the algal fuel might look like to explore how that performs,? says Michigan mechanical engineering professor Andre Boehman. ?Then we can look for ways that, well, maybe we want to change this one molecule. Maybe we?d like it to be somewhat different to get better performance.?

Working with an algal fuel model before the actual biofuel is complete, Boehman explains, allows all facets of the project to move forward concurrently, and thus much more quickly. It also provides a feedback loop - from engineers working on fuel optimization all the way back to ecologists working on algae selection and growth - that provides for adjustments to be made in real time to any element of the process.

?That?s one very nice thing about being in a university environment,? Boehman adds. ?We have tremendous breadth, especially here at the University of Michigan. You go to one department or another and you can find somebody who?s the world expert on whatever it is they?re working on.?

In addition to the crucial support of the University of Michigan, Godwin notes that the ongoing project has been able to clear some major hurdles thanks to funding provided by the National Science Foundation and the US Department of Energy.