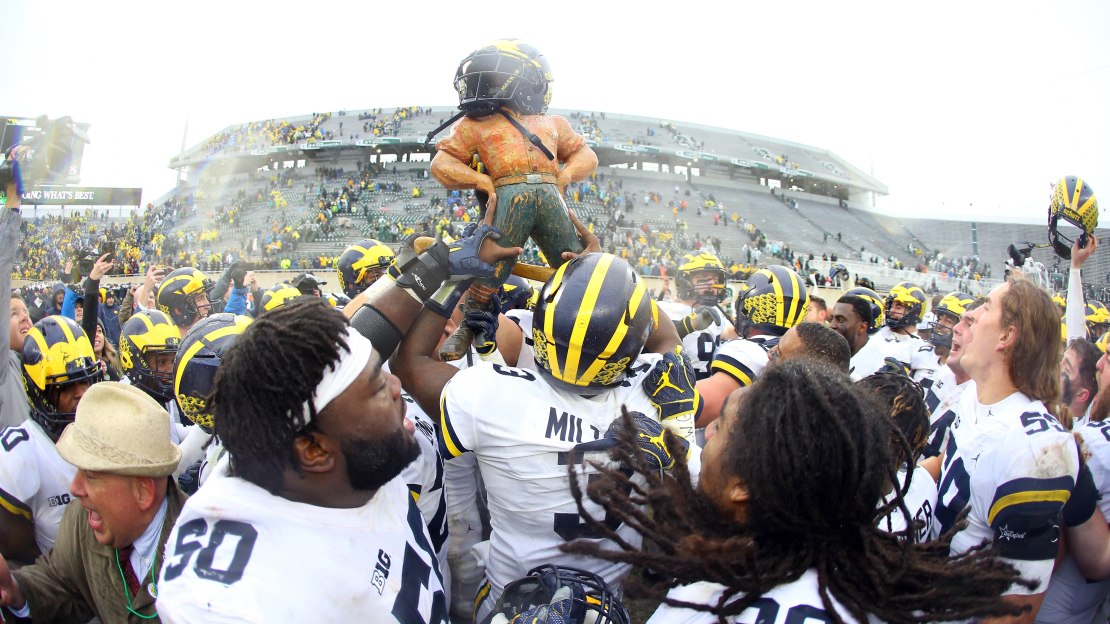 There's a new No. 1 team, for the first time, in my latest Big Ten Power Rankings, presented by ArcelorMittal.

Ohio State owned the top spot for the first eight installments, but it's Michigan's turn. The Wolverines, fresh off an impressive win at rival Michigan State, sit alone atop the Big Ten East, following Ohio State's first loss of the season Saturday night at Purdue.

1. Michigan (7-1, 5-0). The Paul Bunyan Trophy is back in Ann Arbor. Michigan dominated, from start to finish, en route to a 21-7 victory at instate rival Michigan State. The defense held the Spartans to just 94 total yards, as the top-ranked pass defense limited Brian Lewerke to 5 of 25 for 66 yards. The offense did its part against a top-flight defense, with Karan Higdon racking up another 100-yard game (144 yards) and Shea Patterson tossing a pair of touchdowns, including a 79-yarder to Donovan Peoples-Jones. This was a huge win for Jim Harbaugh whose record vs. rivals Michigan State and Ohio State is well-documented; it could be the start to changing the narrative.
Last week: 2
Up next: Idle (vs. Penn State, 11/3)

"We knew they couldn't hang with us… Sometimes your little brother starts acting up, and you just gotta put them in place."

3. Iowa (6-1, 3-1). The gusty wind in Iowa City was a huge factor Saturday, and it played right into Iowa's strengths. The defense, stout all year, especially against the run, held Maryland to just 115 total yards on way to the 23-0 shutout victory. The leading rusher had 16 yards. Even more: Anthony Nelson returned a fumble for a TD. Ivory Kelly-Martin had 98 yards on the ground for Iowa. The Hawkeyes have won their last three by 17, 26 and 23 points.
Last week: 3
Up next: at Penn State

4. Penn State (5-2, 2-2). The two-game losing streak is over, as Penn State edged Indiana, 33-28, in Bloomington. As he does, Trace McSorely led the way for the Nittany Lions, throwing for 220 yards and running for 107 more and a pair of scores. The defense registered six sacks, four of which were amassed by Shaka Toney, tying a single-game program record.
Last week: 5
Up next: vs. Iowa

5. Wisconsin (5-2, 3-1). The Badgers ran wild in a 49-20 victory vs. Illinois, with Jonathan Taylor racking up 159 yards and Taiwan Deal adding 111 yards and 2 TD on just 12 carries. In total, Wisconsin ran for 357 yards. Alex Hornibrook had a better outing than the week prior vs. Michigan, but still threw a couple of interceptions. Speaking of turnovers, the Badgers forced five of them.
Last week: 6
Up next: at Northwestern

6. Michigan State (4-3, 2-2). The latest installment of the Michigan-Michigan State rivalry featured plenty of headlines, as the pregame antics and postgame comments showed. However, on the field, the Spartans were dominated, gaining 94 total yards. LJ Scott returned, but he only got 25 yards on 10 carries. As
one star returned, another got injured, the latest being standout WR Felton Davis III (torn Achilles? tendon). The only touchdown came on a Shea Patterson fumble deep in Michigan territory and a trick play TD pass to Brian Lewerke.
Last week: 4
Up next: vs. Purdue

7. Purdue (4-3, 3-1). The Boilermakers didn?t just beat No. 2 Ohio State, but they controlled the game throughout the night. There were big plays on offense, there was a pick-6 on defense, and there was a trick play on a field goal that led to a first down. While David Blough (378 yards, 3 TD) and D.J. Knox (128 yards, 3 TD) continued their impressive play, Nick Holt's defense, which held the Buckeyes out of the end zone until early in the fourth quarter, might have been the star of the night. The Boilermakers are serious contenders in the West.
Last week: 8
Up next: at Michigan State

Offensive player of the week ?

Defensive player of the week ?

Special teams player of the week ?

Freshman of the week ?

Fresh off its upset vs. No. 2 Ohio State, @BoilerFootball becomes first to sweep weekly laurels since @B1Gfootball added FOW in 2010. pic.twitter.com/doIxzmshbT

8. Northwestern (4-3, 4-1). The Wildcats trailed midway through the third quarter and had to convert two fourth-down plays on the game-winning drive to
escape Piscataway with a win. Clayton Thorson struggled throughout the afternoon, going 17-34 for 150 yards, but Isaiah Bowser ran 24 times for 108 yards and 2 TD, easily the best backfield production since Jeremy Larkin was forced to retire.
Last week: 7
Up next: vs. Wisconsin

9. Maryland (4-3, 2-2). The Terrapins couldn?t get anything going offensively against the stout Iowa defense, ultimately leading to a 23-0 shutout loss. Maryland gained just 115 yards, and the usually strong running game saw Javon Leake's 16 yards lead the way. The passing game had troubles, as well, on a windy day, as Kasim Hill had 47 passing yards. On the other side of the ball, the Terps allowed 224 yards rushing, which was the difference in the game.
Last week: 9
Up next: vs. Illinois

10. Indiana (4-4, 1-4). The Hoosiers outgained the Nittany Lions, 554-417, but turned the ball over 3 times, losing 2 fumbles and 1 INT. Stevie Scott was able to get 138 yards and 2 TD in the loss. Peyton Ramsey (236) and Michael Penix (94) split snaps and combined for 330 yards and a TD; the latter suffered a knee injury and will miss the rest of the season. The Hoosiers still need to find two wins to become bowl eligible.
Last week: 10
Up next: at Minnesota

11. Nebraska (1-6, 1-4). Scott Frost and Nebraska got their first win of the season Saturday, thrashing Minnesota 53-28. The Huskers jumped out to a 28-0 lead, thanks in large part to Devine Ozigbo's 40- and 59-yard TD runs in the first quarter, but the Gophers responded by scoring 22 unanswered points. In the end, Adrian Martinez and the Nebraska offense were the difference, racking up a cool 659 total yards, 383 of which came on the ground.
Last week: 12
Up next: vs. Bethune Cookman

12. Minnesota (3-4, 0-4). After trailing 28-0 at Nebraska, the Gophers ripped off 22 unanswered points to bring it back within six midway through the third quarter. However, the defense couldn?t come up with the necessary stops, allowing Adrian Martinez and the Huskers to rack up 659 total yards. Zack Annexstad left the game at halftime with an injury, and Tanner Morgan stepped in and went 11/16 for 214 yards and 1 INT. WR Tyler Johnson continues to excel (11 rec. 184 yards).
Last week: 11
Up next: vs. Indiana

13. Illinois (3-4, 1-3). The Fighting Illini did themselves no favors in their loss at Wisconsin, surrendering 357 yards on the ground, turning the ball over five times, and going just 2 of 12 on third down. Reggie Corbin?s 80-yard TD run was the big highlight of the afternoon.
Last week: 13
Up next: at Maryland

14. Rutgers (1-7, 0-5). The Scarlet Knights had a lead at the half for the first time since Week 1. They couldn't hold off Big Ten West-leading Northwestern, though, meaning its seven consecutive losses. There was some good news, as the defense showed up, and even got a safety from Willington Previlon.
Last week: 14
Up next: Idle (at Wisconsin, 11/3)