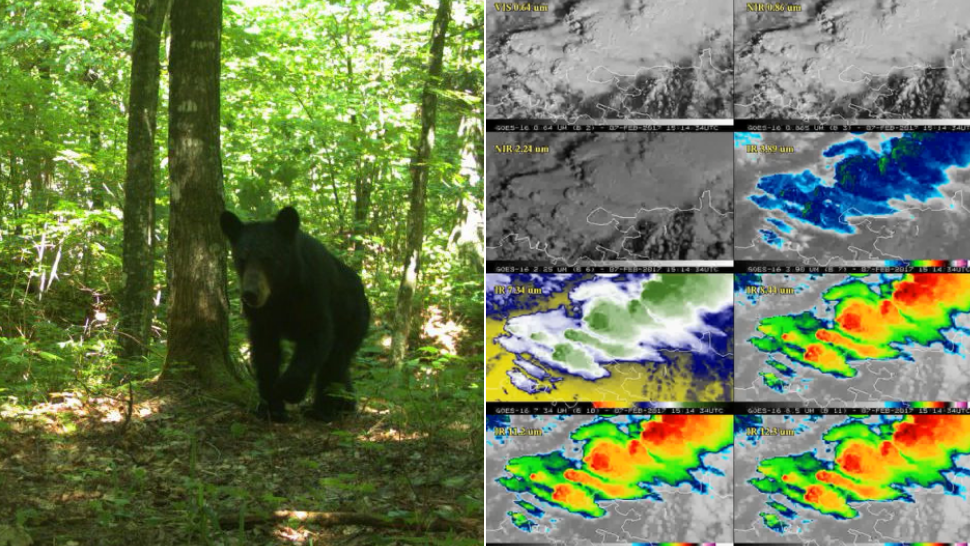 It?s assuredly a battle of the beasts today as the Badgers go head-to-head with the Wolverines. And, while the action on the field will certainly be a sight, we got to thinking about all of the hard-hitting, impactful research going on at these two academic titans. What would it be like to pit these powerhouses against one another in a battle of brainy brawn?

So, we present our first Research Rumble, where two stories of super science enter and ONLY ONE LEAVES!!! (Ed. Note: Well, that?s not exactly, or even at all, true. We hope both of these projects continue unabated and with bountiful funding for years to come, but, you know, dramatic effect and all.)

In one corner, the University of Wisconsin-Madison, whose very high-flying work literally invented the field of satellite meteorology. The tradition continues to this day with GOES-16, a state-of-the-art geostationary satellite that offers an unprecedented view of planetary weather patterns and events.

In the other, the University of Michigan, where researchers have set about taking a census of the state?s carnivores. To aid in the herculean task of tallying up all meat-eaters great and small, they?ve studded the state with high-tech cameras capable of surreptitiously snapping images for review. They?ve even enlisted the help of citizen-scientists to identify the wide variety of varmints which wander past their candid cameras.

We put it to you: whose work reigns supreme? Whose science is superior?

Let us get ourselves ready for #ResearchRumble*

If you checked the weather today, thank Wisconsin: BTN LiveBIG

36,000 kilometers above the surface of the earth, the University of Wisconsin-Madison has some serious eyes in the sky.

No, they?re not keeping tabs on our whereabouts. They?re collecting some of the most important and most accurate weather data available. That?s because, since 1959, Wisconsin has been at the forefront of satellite meteorology. In fact, they invented the field.

A raccoon slowly and deliberately pads by on the way back to its den. A tom turkey?s wattle jiggles as he pecks at the ground for grubs and other tasty morsels. A while later, an inquisitive black bear ambles into frame and stops. Something is different in her world, she notices. She sniffs at the camouflaged box strapped to the trunk of the old growth sugar maple tree. She nudges it with her snout.

Unbeknownst to our bear and other assorted woodland creatures, this incognito box isn?t some piece of detritus left behind by errant outdoorsmen. Rather, it is a high-tech motion-triggered camera dispatched in service of an unprecedented study of biodiversity being undertaken by researchers at the University of Michigan.

*Note this is legally distinct from Michael Buffer?s famous catchphrase.