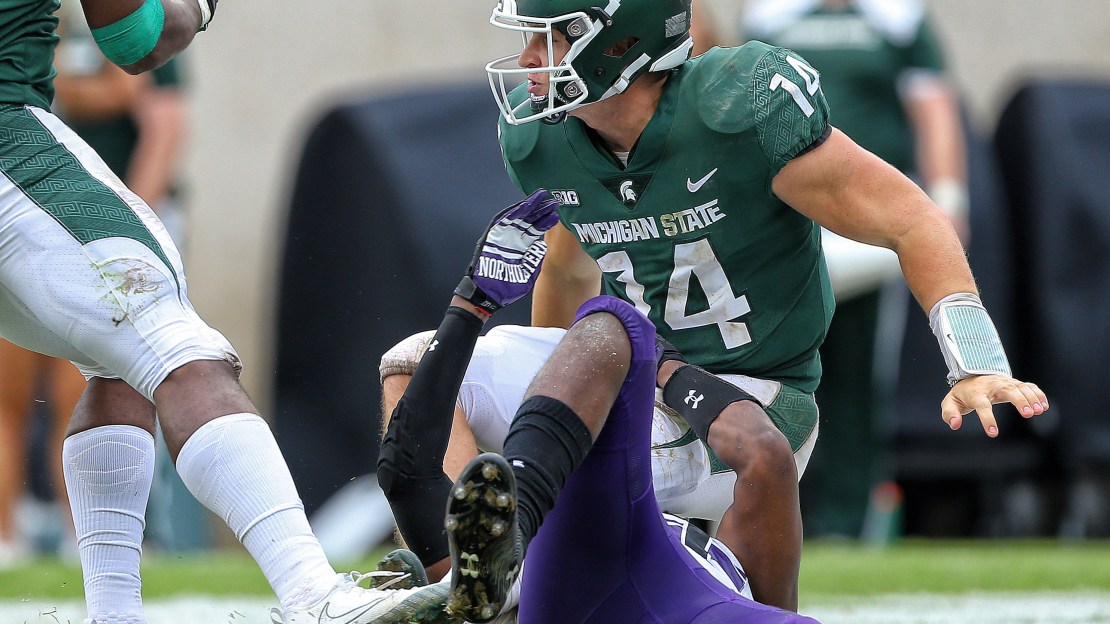 Amazingly, we have reached the midpoint of the 2018 season. As we await Week 7, four Big Ten teams have played six games.

Before we turn our attention to the second half of the regular season, it's time for my latest Big Ten Power Rankings, presented by ArcelorMittal.

1. Ohio State (6-0, 3-0). Another week, another outstanding Dwayne Haskins line: 455 yards & 6 TDs. Parris Campbell was the leading WR, finishing with 9 rec. for 142 yards and a pair of scores. Despite the impressive offensive showing, the defense continues to be an issue, giving up 406 yards, including 322 through the air. The explosive plays allowed are a consistent theme for Ohio State this season.
Last week: 1
Up next: vs.Minnesota

2. Penn State (4-1, 1-1). The Nittany Lions were off in Week 6, and it used the extra rest to prepare for a rematch game vs. Michigan State. Coming off a home loss to Northwestern, the Spartans will be motivated.
Last week: 2
Up next: vs. Michigan State

3. Michigan (5-1, 3-0). The Wolverines had a sloppy start (weather delayed the start by more than an hour), however they eventually wore down the Terrapins. Shea Patterson was great, going for a season-high 282 yards passing and 3 TDs. Michigan trailed after allowing Ty Johnson to return a kick 98 yards for an early score, but it responded by scoring the next 24 points. The defense, playing without star DE Rashan Gary, continued to be great, holding Maryland to just 220 yards, including only 73 through the air.
Last week: 3
Up next: vs. Wisconsin

4. Wisconsin (4-1, 2-0). As Wisconsin backs do vs. Big Ten West rival Nebraska, Jonathan Taylor ran wild en route to finishing with 221 yards and 3 TDs. The defense gave up a ton of yards, however, letting a solid Nebraska unit gain 518 yards, 407 of which came through the air. The secondary is an area the Badgers will need to improve going forward, starting in Week 7.
Last week: 5
Up next: at Michigan

5. Iowa (4-1, 1-1). The Floyd of Rosedale will reside in Iowa City, Iowa, for for the fourth consecutive year. Nate Stanley (314 yards and 4 TDs) and the Hawkeyes made sure the 98-pound pig made the trek back from Minneapolis. The defense allowed a lot of points, but it also recorded four interceptions and five sacks, including a trio from Anthony Nelson.
Last week: 6
Up next: at Indiana

6. Northwestern (2-3, 2-1). Make it three straight wins vs. Michigan State. Clayton Thorson put Northwestern on his back, throwing for 373 yards and 3 TDs. The Wildcats let a 14-6 halftime lead slip away in the third quarter, but managed to score their first second-half points since Sept. 15 (vs. Akron) to put a halt to the post-halftime struggles. The most impressive thing was that they, and Michigan State, knew they were going to have to win being one dimensional, and they executed despite running for eight yards on 20 carries.
Last week: 11
Up next: vs. Nebraska

7. Purdue (2-3, 1-1). Purdue was idle in Week 6, and it is looking to continue its recent offensive fireworks at Illinois. David Blough and company will be looking to remain sharp, as Ohio State looms next week.
Last week: 9
Up next: at Illinois

8. Michigan State (3-2, 1-1). The inability to run the football continues to haunt the Spartans, who had 96 yards, half of which came on WR Felton Davis' TD run, on 24 carries. Conner Heyward and LaDarius Jefferson combined for just 27 yards on 11 carries. Brian Lewerke threw for 329 yards and a TD that went to Davis. The run defense remains elite, only giving up eight yards on 20 carries; the pass defense continues to struggle, surrendering 373 yards.
Last week: 4
Up next: at Penn State

9. Indiana (4-2, 1-2). The Hoosiers gave up 455 yards and 6 TDs to Dwayne Haskins, but the Ohio State QB will do that to defenses. Peyton Ramsey was impressive himself, throwing for 322 yards and 3 TDs. More good news: Indiana had the lead 17-14 midway through the second quarter, and was only down eight at halftime. There aren't any moral victories in football, but Indiana fans have to be encouraged.
Last week: 8
Up next: vs. Iowa

10. Maryland (3-2, 1-1). Things started well in Ann Arbor, as Ty Johnson returned a kick 98 yards for a score to give the Terrapins the early lead. Maryland, which only threw for 73 yards, didn't score again until early in the fourth quarter. Penalties keep hurting the Terrapins (12 for 107 yards), and their 9.25 penalties per game rank 123rd out of 129 teams.
Last week: 7
Up next: vs. Rutgers

11. Minnesota (3-2, 0-2). Zack Annexstad's first taste of the Floyd of Rosedale had its ups (3 TD) and downs (3 INT; sacked five times). The secondary definitely misses Antoine Winfield Jr., as the Gophers gave up 314 passing yards and four TDs. The positive sign for the Gophers defense is that, after giving up 300-plus rushing yards to Maryland, it limited Iowa to 106 yards on 40 carries (2.7 ypc). That bodes well for them down the stretch.
Last week: 10
Up next: at Ohio State

12. Nebraska (0-5, 0-3). The defense just got worn down by the physicality of the Wisconsin offensive line and RB Jonathan Taylor, who ran for 221 yards and 3 TDs. However, in the defeat, Adrian Martinez threw for 384 yards and 2 TDs, and JD Spielman caught nine passes for 209 yards and a TD. The Cornhuskers are currently on a 9-game losing streak.
Last week: 12
Up next: at Northwestern

13. Illinois (3-2, 1-1). The 13-game conference losing streak is over, and Illinois has its first Big Ten win in 700 days. AJ Bush ran for 116 yards and 2 TD and threw for another in his return to the lineup. Illinois ran for 330 yards and had 419 yards of total offense. They had two explosive TD runs in this game, one of 73 by Reggie Corbin and one of 41 by Mike Epstein. The three wins already ties Lovie Smiths high at Illinois.
Last week: 13
Up next: vs. Purdue

14. Rutgers (1-5, 0-3). Rutgers dropped its fifth straight game after opening the season 1-0. The loss to Illinois featured more explosive runs (TDs of 73 and 41 yards) for the opponent, a recurring theme. Another issue: Artur Sitkowski continues to throw interceptions, tossing three more vs. the Illini. RB Jonathan Hilliman was a bright spot, rushing for 76 yards, on 10 carries, and a TD. I'm not sure there is a win left on the schedule.
Last week: 14
Up next: at Maryland