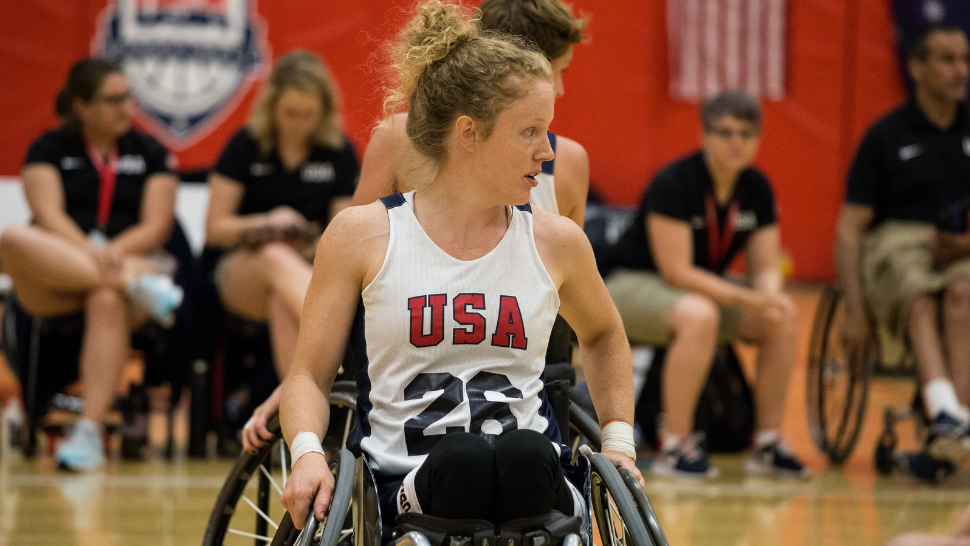 As a high school senior at Bishop Luers High School in Fort Wayne, Indiana, Shelby Gruss felt burned out from basketball. Gruss was a good player and had been playing the sport since sixth grade. But during her senior season, her interests shifted elsewhere, specifically towards outdoors sports like skiing and snowboarding. Gruss was planning to attend the University of Montana where she aimed to become a wildlife conservation officer.

So how did Shelby end up as a Purdue student playing for the Team USA basketball team this past summer at international tournaments in Europe? It came through lots of pain and struggle and a newfound appreciation for the game.

In 2010, during the middle of her senior year of high school, Gruss went on a snowboarding trip with her family in Ohio. She attempted a jump she'd done plenty of times before, but instead of landing on her feet, Gruss landed inverted. Immediately she lost feeling in her legs, and after X-rays, found out she'd broken her T8 and T9 vertebrae and would be paralyzed from waist down for the rest of her life.

A few weeks after her accident, as Gruss was still getting used to living without walking, she was introduced to wheelchair basketball. Still down on the sport, she declined to play initially. But a few months later, she opted to give it a try, and hasn't put the ball down since. Gruss said that playing wheelchair basketball has given her a new appreciation for the sport and has helped her cope from the life-changing injury she endured.

"The whole concept of the game is the same, but there are differences," Shelby said. "The way you play defense is different. The way your chair can move is different than how your feet can move. It produced a new challenge and I'm one of those people that if you put a challenge in front of me I'm going to want to accomplish it. It re-invented the sport for me.

"Defense was kind of my thing when I played in high school, and then I came out and I was trying to sidestep, but you cant sidestep in a wheelchair. It made me learn new ways to play."

Having played traditional basketball for many years, Gruss already knew the nuances of the game. But it took her some time to adjusting to the wheelchair version of the sport. She tried out for the national team in 2013 but was cut. She first made the roster in 2017, and this summer, became the captain for the team that played at the World Championships in Hamburg, Germany. Players on the American team range in age from 14 to 26, with varying levels of experience. The U.S. team finished in sixth place out of 12 countries in the tournament.

Gruss said she had a really good support system after her accident, but that playing wheelchair basketball help accelerate the recovery process. "It opened up my eyes to what I could still do," she said.

Gruss said she doesn't think of herself as a role model for others with disabilities. However, she doesn't shy away from speaking about her accident and recovery in the hopes of inspiring people. She's currently working towards her PhD in plant breeding and genetics, which will occupy the majority of the time in the next three years. Her secondary goal is to do something she never could have dreamed of even one year ago - playing for Team USA at the 2020 Paralympic Games in Tokyo.

"If you can do that, I can do that," Gruss said about her philosophy. "There's a lot more that I can do than I realized. I grew up in a small town, so I didn't really know anything about disabilities until I was disabled. It really opened my eyes to the possibilities. There's always somebody there who can take on a challenge."