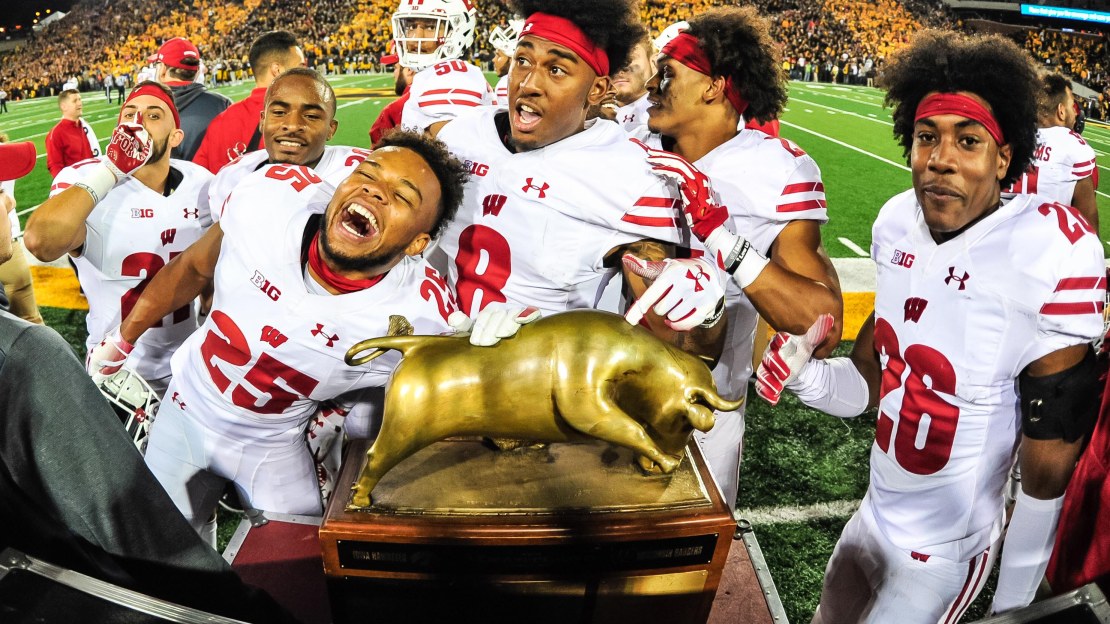 Every Big Ten team has played a conference game now, so it's starting to get a little easier to asses the teams. The first week of (almost) all-out Big Ten play saw Wisconsin card a big win at Iowa and Penn State use a prolific fourth quarter to squash Illinois' upset bid.

1. Ohio State (4-0, 1-0). Urban Meyer returned to the sidelines in Week 4, and the Buckeyes continue to look explosive en route to a 49-6 victory. Dwayne Haskins only played the first half and was 21-of-24 for 304 yards and 5 TD passes. Parris Campbell was his favorite target, finishing with had 8 receptions, 147 yards and 2 TD. The competition is about to get a lot tougher, as Meyer and the Buckeyes return to Beaver Stadium for the first time since dropping a 2016 heartbreaker.
Last week: 1
Up next: at Penn State

2. Michigan (3-1, 1-0). The Wolverines put an absolute whooping on Nebraska in all three phases of the game. On offense, Karan Higdon had 12 carries for 136 and 1 TD; the defense held Nebraska to 132 yards, 3-of-13 on 3rd down, and forced two turnovers; and, finally, on special teams, Donovan Peoples-Jones returned a punt for a TD.
Last week: 2
Up next: at Northwestern

3. Penn State (4-0, 1-0). The Nittany Lions were able to absorb Illinois' best shot, using an incredible 35-point fourth quarter to pull away and remain undefeated. Trace McSorley continues to impress (3 TD passes; 92 rushing yards), but the star of the offense was Miles Sanders, who racked up an even 200 yards rushing and three touchdowns in a breakout performance.
Last week: 3
Up next: vs. Ohio State

1-0 Mentality, need all of Nittany Nations support, the most challenging environment in the HISTORY of College Football! #110kStrong

4. Michigan State (3-1, 1-0). The Spartans opened up the playbook out of the bye week to card a road win at previously undefeated Indiana. There were a couple of trick plays, including a fake field goal, resulting in a touchdown for kicker Matt Coghlin, that enabled Michigan State to fend off the Hoosiers. Freshman WR Jalen Nailor was the biggest star, hauling in a 16-yard TD pass and scooting for a 75-yard score.
Last week: 4
Up next: vs. Central Michigan

5. Wisconsin (3-1, 1-0). The Badgers escaped Kinnick Stadium with a gritty team performance on Saturday night. The victory, Wisconsin's fifth straight in Iowa City, gives Wisconsin a serious leg up in the Big Ten West race. Jonathan Taylor ran for 113 yards and Alex Hornibrook finished 17 of 22 for 205 yards and 3 TD. Don't eliminate Wisconsin from the playoff picture just yet; it just to be perfect the rest of the way.
Last week: 6
Up next: Idle (Oct. 6 vs. Nebraska)

6. Iowa (3-1, 0-1). The Hawkeyes gave Wisconsin all it could handle on Saturday night, but made too many mistakes to pull off the upset. For example, Iowa was inside the Badgers' 5-yard line twice, only to come away with three points. Nate Stanley threw for 256 yards, but was picked off with 38 seconds left when the ball skipped off his WR hands. T.J. Hockenson had a nice night (3 rec., 125 yards) for the Hawkeyes, who have a week off to prepare for Floyd of Rosedale at Minnesota.
Last week: 5
Up next: Idle (Oct. 6 at Minnesota)

7. Maryland (3-1, 1-0). One week after a disappointing and offensively inept defeat vs. Temple, the Terrapins' big-play offense was back, in a big way, to lead them to a Big Ten-opening win vs. previously unbeaten Minnesota. About those big plays, Ty Johnson (81 yards) and Anthony McFarland (64) ripped off explosive runs as Maryland ran for 315 yards, the program's Big Ten-leading ninth 300-yard rushing performance since 2015.
Last week: 9
Up next: Idle (Oct. at Michigan)

8. Indiana (3-1, 0-1). The Hoosiers weren?t able to run the football against the Spartans defense on Saturday rushing only for 29 yards total. One standout was WR Whop Philyor who had 13 rec for 148 yards and a TD. Indiana had a bit of bad luck on the INT for a TD that gave the Spartans a 14 point lead early. The Hoosiers rallied to pull within 7 late but weren?t able to make the big defensive stop to try and force OT. Indiana will look to rebound against Rutgers.
Last week: 8
Up next: at Rutgers

9. Minnesota (3-1, 0-1). The Golden Gophers struggled on the road against Maryland, after dominating three straight non-conference foes. The defense allowed explosive TD runs, gave up 315 yards on the ground, and lost star DB Antoine Winfield Jr. to a season-ending foot injury. The youth for Minnesota finally showed, as true freshman QB Zack Annexstad threw two picks, one of which went for a TD.
Last week: 7
Up next: Idle (Oct. 6 vs. Iowa)

10. Purdue (1-3, 0-1). It took longer than expected, but the Boilermakers got their first win Saturday, upsetting No. 23 Boston College. The victory marks Purdue's first over a ranked team since 2011 (No. 23 Illinois), and the defense (four interceptions; limited BC star RB A.J. Dillon to 59 yards) and David Blough (296 passing yards, 3 TD) made it possible. Rondale Moore did his part, too, with a pair of TD receptions.
Last week: 12
Up next: at Nebraska

11. Northwestern (1-2, 1-0). Northwestern was off in Week 4, meaning it had the week to look in the mirror and try to fix some of the early season mistakes. Another positive to the off week: It gives the Wildcats two weeks to prepare for their test vs. Michigan, winners of three straight.
Last week: 11
Up next: vs. Michigan

12. Nebraska (0-3, 0-1). At 0-3, the Huskers are off to their worst start since 1945. The latest loss, a blowout at Michigan, was the least competitive of the trio. Nebraska got pushed around by the Wolverines up in the Big House, trailing 39-0 at the half and managing just 132 total yards. The Huskers have lost seven straight, dating back to last season.
Last week: 10
Up next: vs. Purdue

13. Illinois (2-2, 0-1). For three quarters, it looked like Lovie Smith and Illinois might notch a huge upset vs. No. 10 Penn State. Then the fourth quarter happened, and the Nittany Lions erupted for 35 points unanswered points. There are things to be excited about in Champaign, Illinois, chief among them being Rod Smith's offense.
Last week: 13
Up next: Idle (Oct. 6 at Rutgers )

14. Rutgers (1-3, 0-1). The Scarlet Knight struggled at home Saturday against the Buffalo Bulls, from the MAC. The defensive struggles continued as Rutgers allowed too many explosive plays for the third consecutive week, a span in which it has allowed 149 points. True freshman QB Art Sitkowski struggled, completing 6 of 13 passes for 39 yards, before being pulled from the game.
Last week: 14
Up next: vs. Indiana