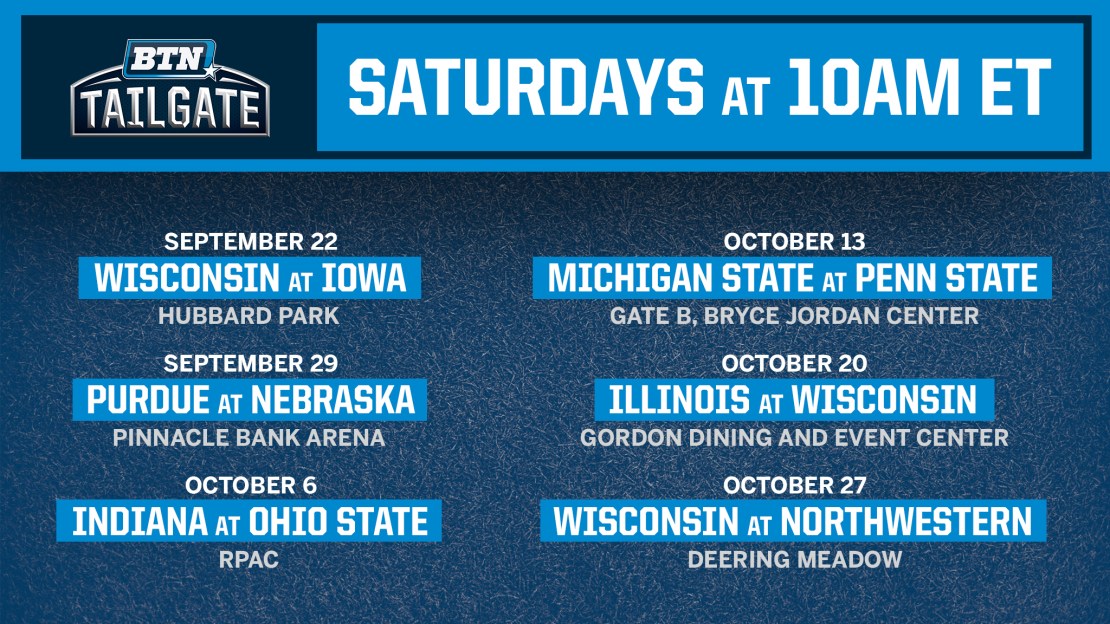 As football season kicks into high gear, the first six sites for BTN Tailgate, the network?s travelling Saturday studio show, have now been confirmed. BTN Tailgate originates from a different Big Ten campus each week during conference play, and begins at 10 a.m. ET leading into the first games of the day at noon ET.

Saturday?s BTN Tailgate heads to Iowa City as the Hawkeyes look to take an early lead in the Big Ten West. Iowa will face the No. 18 Wisconsin Badgers and an offense featuring sophomore running back Johnathan Taylor, who ranks second nationally in rushing at 171.7 yards per game. The matchup will be televised by FOX at 7:30 p.m. ET.

The following week on Sept. 29, BTN Tailgate will visit Nebraska when the Huskers host Purdue, in addition to an Oct. 6 trip to No. 4 Ohio State as the Buckeyes welcome Indiana on Homecoming Weekend. Tailgate will broadcast live from Penn State when the No. 10 Nittany Lions battle No. 24 Michigan State on Oct. 12, and head to Wisconsin on Oct. 20 for the Badgers? Homecoming matchup against Illinois. October closes out in Evanston on Oct. 27 when Northwestern Wildcats take on the defending Big Ten West champion Badgers.

A wide array of sponsor activations encompass the BTN Tailgate fan zone footprint, including a DJ Booth and live music presented by T-Mobile, a football skills zone presented by TIAA and an LED viewing board to enhance the on-site experience presented by GEICO. Free food and sign making stations will be available at each location, along with additional giveaways.

Entrance will open at 9 a.m. ET, one-hour prior to the start of the live show.

BTN Tailgate can be streamed via the web, smartphones, tablets and connected devices through BTN2Go or the Fox Sports app.