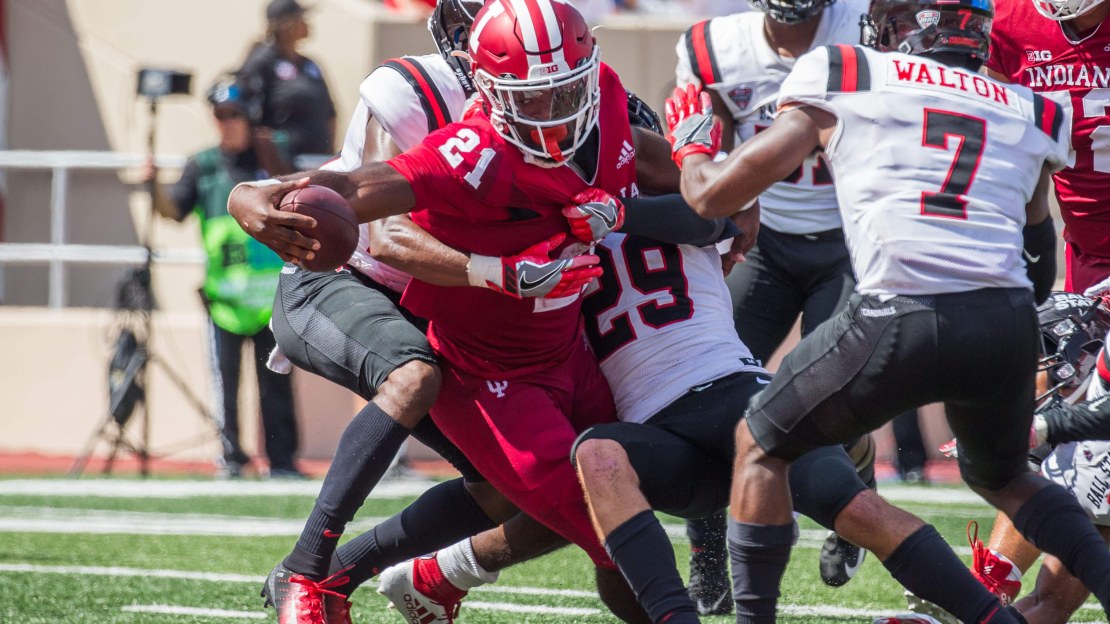 It wasn't a memorable week for the Big Ten on Saturday. As a result, there's movement in my latest Big Ten Power Rankings, presented by ArcelorMittal.

The biggest mover: Wisconsin, down four spots, following its home loss to BYU.

1. Ohio State (3-0, 1-0). The Buckeyes won big vs. a tough TCU team in Texas. QB Dwayne Haskins threw for 344 yards and two touchdowns in his biggest test to date. Ohio State showed how great it is out of the half, ripping off three scores in a span of four minutes to turn an eight-point deficit into a 12-point advantage. The defense was up and down, but Nick Bosa (left with injury) and Dremont Jones were the difference. Reminder: Urban Meyer returns to the sideline next week.
Last week: 1
Up next: vs. Tulane

2. Michigan (2-1). Just like last week, Michigan won big at home. This time, vs. SMU, Shea Patterson tossed three touchdowns, all to Donovan Peoples-Jones, to lead the Wolverines to a 45-20 win. The biggest play came in the final seconds of the first half, when Josh Metellus housed an interception to make it a two-score game and give the Wolverines momentum going into halftime.
Last week: 3
Up next: at Nebraska

"Is this thing on?" – @NittanyKidNick2, probably.

4. Michigan State (2-1). The Spartans had a bye and jump up a spot this week. At least when Michigan State lost, it was on the road to a first-round pick in N'Keal Harry. It was also 100 degrees at kickoff and 2 a.m. when the game ended. I believe, head-to-head, Michigan State is better than everyone below it.
Last week: 5
Up next: at Indiana

5. Iowa (3-0). Iowa's defense continues to impress, holding Northern Iowa to just 228 yards total and 21 yards rushing, in a 38-14 victory. Nate Stanley had his best game of the short season, throwing for 309 yards and two touchdowns, one going to Noah Fant, Iowa's new leader in TD catches among tight ends. The defense, in particular the rush defense, will have its biggest test next week vs. Jonathan Taylor and Wisconsin.
Last week: 7
Up next: vs. Wisconsin

6. Wisconsin (2-1). The Badgers' loss to BYU was the toughest of tough defeats for the Big Ten in Week 3. It was a rare defeat, as well, as it marked the fist time Wisconsin lost a home non-conference game since 2003. The 6th-ranked Badgers don't look the same on defense, which could be a problem going forward.
Last week: 2
Up next: at Iowa

7. Minnesota (3-0). The Gophers are 3-0 for the third consecutive season and own the Big Ten's longest non-conference winning streak. The youth movement continued to impress Saturday vs. Miami (OH). Sophomore WR Tyler Johnson caught a trio of touchdown passes, and freshman Bryce Williams, filling in for injured Rodney Smith, had 176 total yards.
Last week: 8
Up next: at Maryland

Minnesota is 3-0, and it owns @B1Gfootball's longest non-conference winning streak.

And yet, @Coach_Fleck noticed some heads down in the locker room after @GopherFootball's easy Week 3 win.

8. Indiana (3-0). Tom Allen has done something other Big Ten teams haven't been able to do: win against lesser non-conference opponents, as it's supposed to do. In Week 3, that opponent was Ball State, and Indiana dominated en route to a 38-10 victory. Like last week, true freshman RB Stevie Scott led the way, churning out 144 yards and two touchdowns.
Last week: 11
Up next: vs. Michigan State

9. Maryland (2-1). In one of the biggest surprises of Week 3, previously winless Temple knocked off Maryland at Captial One Field. The Terrapins didn't just get beat, though, losing by 21 points and scoring their lone points via a pick-6 and a blocked punt. Most disturbing, the Terps only gained 195 total yards.
Last week: 6
Up next: vs. Minnesota

10. Nebraska (0-2). The Scott Frost Era hasn't begun as Nebraska fans had anticipated. Without true freshman Adrian Martinez (leg), the offense struggled to be dynamic in a loss to Troy. Penalties, turnovers, and special teams continue to be issues. The Nebraska faithful hopes Martinez will be back next week as Big Ten play opens.
Last week: 10
Up next: at Michigan

11. Northwestern (1-2, 1-0). The Wildcats' disappointing start to the season continued Saturday in a surprising loss to Akron. Northwestern led 21-3 at halftime, but mistakes allowed the Zips back into it. Clayton Thorson, who became the program's all-time leader in touchdown passes on Northwestern's final score of the first half, threw a pair of interceptions and lost a fumble – all three miscues led to TDs.
Last week: 9
Up next: Idle

12. Purdue (0-3, 0-1). Despite David Blough's historic and career night (572 passing yards), the Boilermakers fell on a walk-off field goal to Missouri. For the third time in as many weeks, Purdue had a costly 15-yard penalty. The Boilermakers are winless, but they have dropped their three games (Northwestern, Eastern Michigan, Missouri) by an aggregate eight points.
Last week: 12
Up next: vs. Boston College

13. Illinois (2-1). The Illini battled, and led, South Florida, one of the best Group of 5 teams, for most of the day Saturday at Soldier Field. In the end, the Illini couldn't stop the Bulls, who racked up 411 yards through the air and 215 yards on the ground. Things are about to get a lot more challenging, starting with Penn State in the Big Ten opener.
Last week: 14
Up next: vs. Penn State (Friday)

14. Rutgers (1-2, 0-1). It was a tough decision as to who to put at the bottom of the power rankings, between Illinois and Rutgers. The Scarlet Knights, however, lost in embarrassing fashion (55-14) Saturday at Kansas, which now owns its first back-to-back wins vs. FBS opponents since 2009. Artur Sitkowkski threw three interceptions, including two that the Jayhawks returned for a touchdown.
Last week: 13
Up next: vs. Buffalo