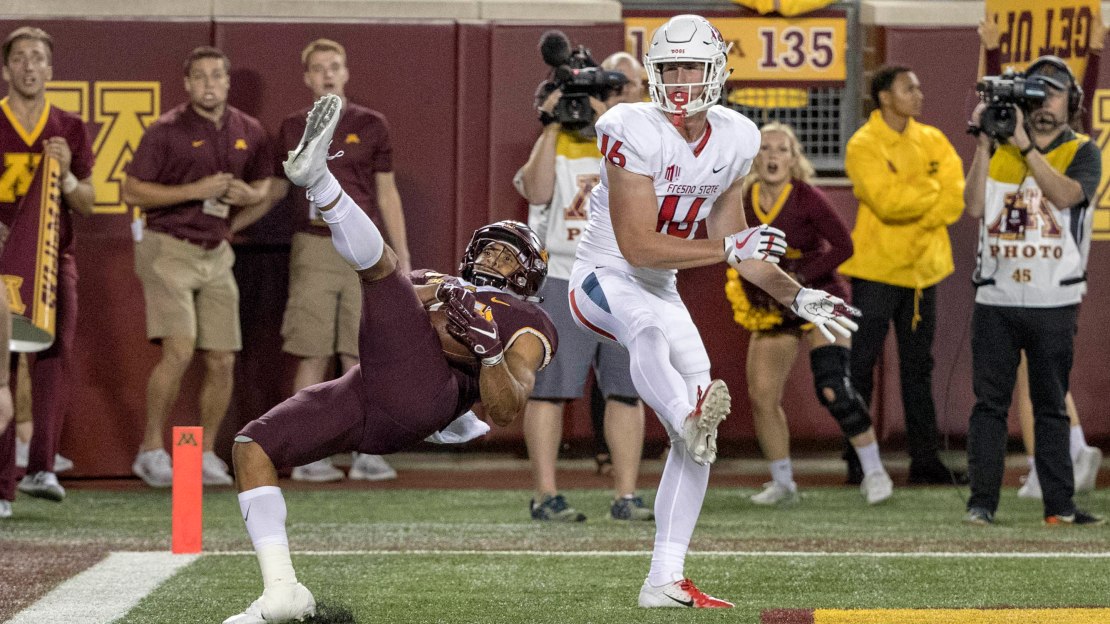 It's Monday, and that means it's time to reveal my latest Big Ten Power Rankings, presented by ArcelorMittal. Get my latest list below.

1. Ohio State (2-0). Ohio State continued to look impressive, this time in a 52-3 victory over Rutgers. The combination of Dwayne Haskins and Tate Martell went 30-33 for 354 yards and 5 TD. Martell was also the Buckeyes' leading rusher (95 yards). Nick Bosa and Chase Young continued their race to the QB, with Bosa getting one sack and Young getting two, while the unit allowed 134 yards.
Last week: 1
Up next: vs. No. 15 TCU (AT&T Stadium)

2. Wisconsin (2-0). Many were wondering what was going on in Madison when the Badgers were only up 10-7 at halftime against New Mexico. However, the Badgers offense got rolling behind the legs of Jonathan Taylor, who carried the ball 33 times for 253 yards (career high) and 3 TD. Another Taylor had a great day, as well, in WR A.J. Taylor, who finished with five receptions for 134 yards and a TD.
Last week: 2
Up next: vs. BYU

3. Michigan (1-1). Michigan bounced back nicely with a 49-3 victory over Western Michigan on Saturday. Karan Higdon had a big day with 156 yards on the ground and a TD, and Chris Evans added 86 yards and two TD. The offensive line didn?t only open up holes for the ground game, but gave Shea Patterson time to have an efficient day (12 of 17, 125 yards, 3 TD). The defense had a better day, only allowing three points.
Last week: 3
Up next: vs. SMU

4. Penn State (2-0). Despite a slow start, Penn State got a big 51-6 victory at rival Pitt on Saturday night. Dynamic freshman KJ Hamler continues to impress, getting a TD reception and showing his running skills with his only carry going for a 32-yard score. Trace McSorley was responsible for three scores, two through the air (30 straight games with at least one passing TD) and one on the ground. The Nittany Lions looked like everyone expected them to look.
Last week: 5
Up next: vs. Kent State

5. Michigan State (1-1). The Spartans got upset in Tempe late on Saturday night (Sunday morning). Going into the fourth quarter up 13-3, the defense wasn?t able to hold onto the lead, giving up the final 13 points of the game. For the second straight week, the Spartans weren?t able to establish the running game. The defense gave up 380 yards through the air to Manny Wilkins.
Last week: 4
Up next: at Indiana (9/22)

7. Iowa (2-0). Make it four straight wins vs. Iowa State. This one was the opposite of last season's shootout, with Iowa claiming a 13-3 victory that Kirk Ferentz dubbed a "pitchers' duel." The Hawkeyes gave up only 188 yards, and DE A.J. Epenesa led the way with a pair of sacks and a forced fumble that all but sealed the win. Iowa only allowed Iowa State into the red zone once and forced five three-and-outs. The Hawkeyes will need to make strides in the passing game if they plan to compete in the Big Ten West.
Last week: 8
Up next: vs. Northern Iowa

8. Minnesota (2-0). The Golden Gophers won a gritty game vs. Fresno State on Saturday night. Antoine Winfield Jr. sealed the victory with an amazing interception, his second consecutive week with a highlight-reel play. Seth Green, for the second time in as many weeks, had a pair of touchdown runs out of the Wildcat, which the Gophers are calling "The Green Line." The bad news for Minnesota is that RB Rodney Smith left the game in the first quarter (leg) and did not return.
Last week: 11
Up next: vs. Miaim (OH)

9. Northwestern (1-1). Things started great, with Northwestern marching down the field behind Jeremy Larkin for an early TD, but that was the only scoring it would get in a 21-7 home loss to Duke. The good news: Larkin ran for 121 yards and Flynn Nagel had 12 catches for 133 yards. The surprising outcome snapped Northwestern's nation-leading nine-game winning streak, which dated back to Oct. 7, 2017. Both Clayton Thorson and TJ Green played, and both faced pressure and threw an interception.
Last week: 6
Up next: vs. Akron

10. Nebraska (0-1). The Scott Frost era did not open the way the Cornhusker faithful would?ve hoped in a 33-28 defeat to former Big 12 rival Colorado. The Huskers fumbled on the first two possessions, spotting Colorado a 14-0 lead. Adrian Martinez's debut was off to a solid start before he left the game with an injury in the second half. Perhaps the best sign for Nebraska was its defense, which had seven sacks, a year removed from totaling 14.
Last week: 9
Up next: vs. Troy

The @HuskerFBNation D left some to be desired in 2017.@gerrydinardo, for one, liked what he saw in the unit's 2018 debut.

"Basically the opposite of what we watched last year on defense." pic.twitter.com/oT44zMmxq3

11. Indiana (2-0). Indiana beat Virginia, 20-16, behind freshman running back Stevie Scott?s 31 carries, 204 yards and 1 TD. The Hoosiers backfield has seen its share of attrition, and it may have found a workhorse in Scott, who was able to take a lot of time off the clock in a soggy second half in Bloomington. Peyton Ramsey was 16 of 22 for 150 yards and a pair of scoring strikes; he also threw an interception.
Last week: 12
Up next: vs. Ball State

12. Purdue (0-2). The Boilermakers start the season 0-2 after a disappointing home loss vs. Eastern Michigan. In consecutive weeks, unsportsmanlike penalties have continued the opposing team's end-of-the-game drive and led to a Boilermakers' loss. The defense did have six sacks, but still let up over 400 yards. Purdue was able to run for 341 yards, with D.J. Knox leading the way (152 yards, 1 TD).
Last week: 10
Up next: vs. Missouri

13. Rutgers (1-1). Rutgers had a rough performance in a 52-3 loss at No. 4 Ohio State, its fifth straight lopsided loss to the Buckeyes. The Scarlet Knights were only able to gain 134 yards of total offense and struggled all day against that talented Buckeye defensive front. Making matters worse, true freshman QB Artur Sitkowski left the game with an apparent shoulder injury on the final play of the first half. Giovanni Rescigno came in and didn?t fare much better; together, they threw for 65 yards.
Last week: 13
Up next: vs. Kansas

14. Illinois (2-0). The Fighting Illini overcame a slow start for the second weekend in a row. Thanks to some big plays from Edwin Carter and an opportunistic defense, though, Illinois was able to pull away from Western Illinois for a 34-14 victory. Carter, unfortunately, had to leave the game following a scary fall to the turf on his second TD reception. QB AJ Bush left in the first quarter, but MJ Rivers provided a spark (9-16, 105 yards, 2 TD).
Last week: 14
Up next: vs. USF