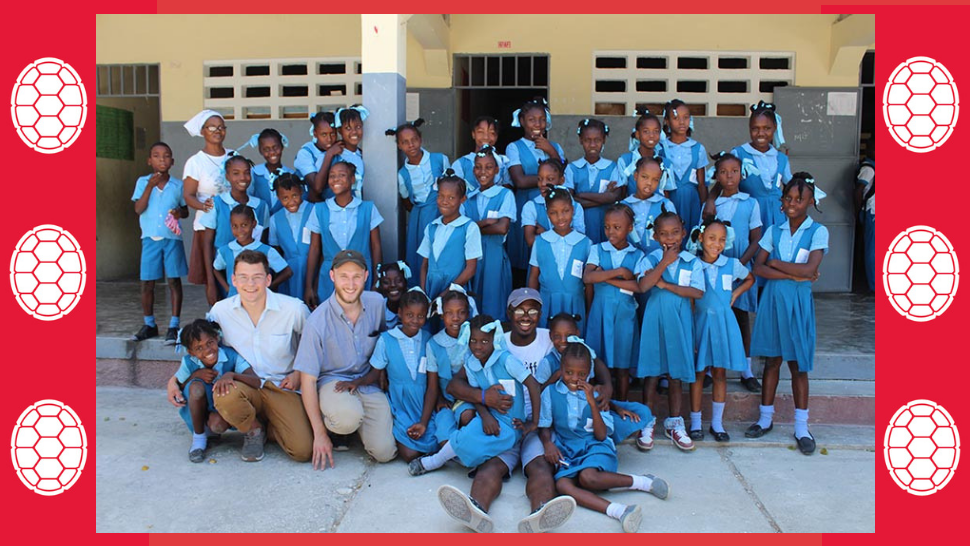 Przybocki, Houstle and Boulin at an orphanage in Leogane, Haiti.

A natural disaster strikes in a struggling nation already beset by crumbling infrastructure, a thin-if-existent emergency response network and crippling political strife; in the aftermath, often when chaos still reigns, aid organizations – in the form of NGOs – are quick to the scene. And, while the work they perform is admirable and well-intentioned, all too often these groups exit hastily and without putting in to place a sustainable support system to ensure their toils have long term impact.

This scenario weighed heavily on the mind of University of Maryland senior Brian Houstle when he was brainstorming ideas for he and his fellow students in the UMD School of Architecture, Planning and Preservation (UMDSAPP) could give back to communities around the world. He came to the conclusion that planning, designing and building structures for communities in need around the world would be a great opportunity for students to expand their horizons – both philanthropically and architecturally.

Houstle researched where help like this was most needed and, coupled with a serendipitous meeting with UMDSAPP program assistant and native Haitian Gérard Boulin, he created Roots Home & Abroad.

Houstle explained that their goal isn?t to swoop into Haiti, complete some resume-building projects, and leave. They want to teach Haitians to build and maintain the designs that Roots creates in collaboration with the community. ?We thought, maybe there's a way to rewrite how organizations build relationships. A big point to our story is that we look to educate and empower the community to create a sustainable quality of life. Instead of saying, ?Hey, it looks like you guys need X, Y and Z,? we ask, ?What do you need???

The whole experience is a two-way street, explains Houstle. ?We learn about their culture. We learn how to work with communities. Students get really great design experience. We build something that's long lasting, and we can leave the community knowing that not only are they going to be able to maintain the project, but also be able to build more projects similar to it.?

Boulin traveled with Houstle and Roots Vice President Nicholas Przybocki in May 2018 to Léogâne, Haiti, Boulin?s hometown. Léogâne was the epicenter of the massive earthquake that devastated Haiti in 2010. It was apparent that the local community had a lingering bad taste in their mouths from NGOs that operated by their own agenda. Houstle said that much of their trip was to listen, learn, build trust and open a dialogue with the community–none of which would have been possible without Boulin?s connections; he was able to put the Roots team in touch with Léogâne?s mayor, local business owners and community members who contributed important insights into what the community needed – and what it didn?t.

After a week in Haiti, Houstle and Przybocki committed to returning with design ideas for what would likely be a multipurpose community center. Once back on campus, Houstle and Przybocki presented a summary of the trip to UMD Architecture Program Director Brian Kelly and professor Ronit Eisenbach who saw potential for much more than just a one-off building experience.

?We're sitting there and telling [Kelly] the story, saying that we're going to do this volunteer studio for fall, and we're going to design a community center,? Houstle remembers. ?He stopped us and asked, ?Well, why not just have a course?? We built a plan and the fall research course just started [this semester.]?

Houstle said that the fall course will be followed by a three-week studio in the winter, culminating with their next trip to Haiti, where they?ll have another design consultation with the local residents. A spring studio is likely, but not yet confirmed, where Roots would return to Haiti, present a design and consult further with the community.

While a final product is still several years off, there?s no time to waste, especially in regards to fundraising. Houstle and Przybocki are currently applying for 501(c)(3) nonprofit status and applying for various grants to raise the estimated $50,000 to $150,000 needed for the project. ?We predict that it will probably be three-to-five years until we reach final design, drawings, funding and construction.?

When Houstle looks to the future, he considers sustainability beyond architecture and passing the torch. ?I think anyone who starts an organization has one really big dream: that they can step out of that leadership role and it is sustained at the same strength as when it started. My goal is to one day not be the president of Roots–that someone will take on the nonprofit management, someone can take on the student organization, and really push to create even better projects than what we're doing today. I hope that we can build some really cool coursework so that this can become curricular for students. Building a relationship with the university is a big goal for us.?