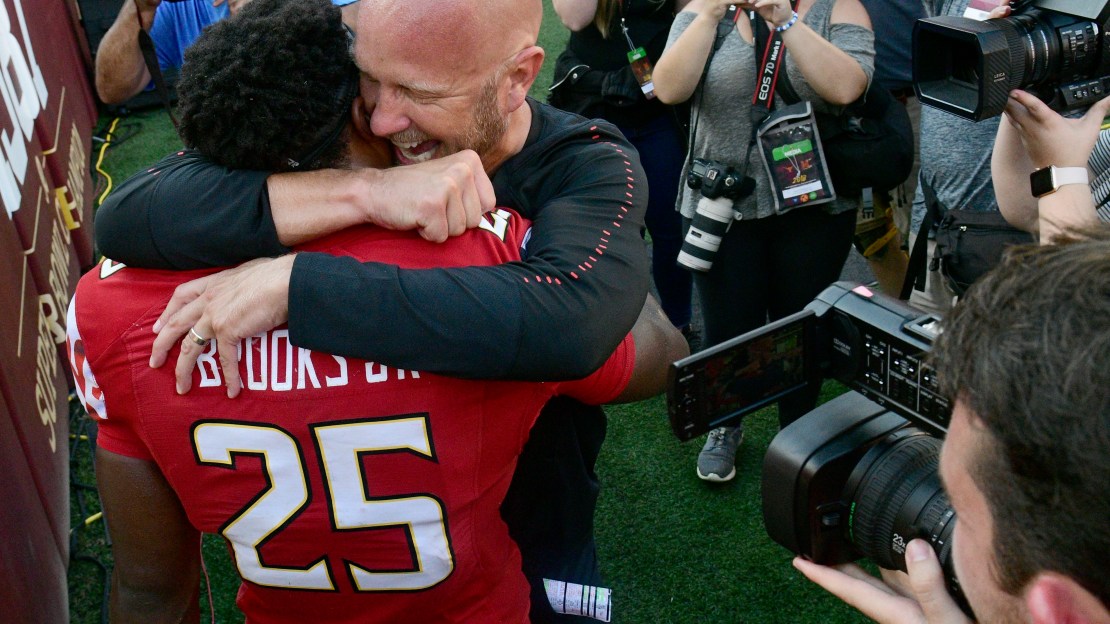 Week 1 is in the books, and there is no change to the top five of my latest Big Ten Power Rankings, presented by ArcelorMittal. That's right, Michigan is not moving down following its loss at Notre Dame.

Many of you are surely asking, "Why?" Find out below.

2. Wisconsin (1-0). The Badgers took care of business vs. Western Kentucky, led by RB Jonathan Taylor's 145 yards rushing and a pair of touchdowns. Alex Hornibrook was sharp, as well, throwing for 257 yards and 2 scores.
Last week: 2
Up next: vs. New Mexico

3. Michigan (0-1). I'm not dropping Michigan after an upsetting debut for Shea Patterson and the Wolverines. The reason being, they played a good Notre Dame team on the road, when Michigan State and Penn State, the teams directly behind them on my list, hosted inferior teams and struggled. The Wolverines only rushed for 58 yards on 33 attempts. Don Brown's defense gave up big plays early, and the Wolverines weren't able to dig themselves out of the hole. This doesn't derail their Big Ten title hopes, but their margin for error is now at zero.
Last week: 3
Up next: vs. Western Michigan

4. Michigan State (1-0). The Spartans avoided a big upset on Friday night, with Brian Lewerke orchestrating a late come-from-behind TD drive. His impressive throw to Felton Davis lll, who made a terrific catch, late in the fourth quarter set up Connor Heyward's TD run. Joe Bachie sealed the game with an amazing individual-effort INT (watch below). The Spartans have a lot of things to clean up before taking on Arizona State.
Last week: 4
Up next: at Arizona State

5. Penn State (1-0). Penn State avoided a costly upset with an overtime win vs. Appalachian State on Saturday, exactly 11 years to the day of the Mountaineers' iconic win vs. Michigan. Trace McSorley led the way, rushing for two TD and throwing an OT-clinching TD strike to KJ Hamler. Miles Sanders had 19 carries for 91 yards and a pair of TD in his debut replacing Saquon Barkley.
Last week: 5
Up next: at Pitt

6. Northwestern (1-0, 1-0). Northwestern came up with a big conference win Thursday night at Purdue. Jeremy Larkin answered the questions of how the Wildcats would replace Justin Jackson, putting up 143 yards and a pair of scores.
Last week: 7
Up next: vs. Duke

7. Maryland (1-0). For the second year in a row, Maryland upset a ranked Texas team behind the breakout performance of a true freshman; this time, it was receiver Jeshaun Jones, who ran for a TD, caught a TD and threw a TD on his first three career touches. If the Terrapins can stay healthy, it will be interesting to watch where they stack up in the loaded Big Ten East.
Last week: 10
Up next: at Bowling Green

8. Iowa (1-0). The Hawkeyes started slow on offense, and were only up on Northern Illinois, 3-0, at halftime. The defense pitched a shutout until late in the fourth quarter. With the win, Kirk Ferentz passed Hayden Fry as Iowa's all-time leader in wins.
Last week: 6
Up next: vs. Iowa State

9. Nebraska (0-0). The much-anticipated debut of Scott Frost was canceled, as the weather in Lincoln did not cooperate. Thunderstorms rolled through the area, and after multiple delays, officials ended up calling the game. There are no plans to reschedule the game, so Husker fans will have to wait until Saturday's matchup vs. Colorado to see the Cornhuskers and their new head coach.
Last week: 8
Up next: vs. Colorado

10. Purdue (0-1, 0-1). Rondale Moore might have secured Big Ten Freshman of the Year after Week 1. The true freshman had 11 receptions for 109 yards and one TD, as well as two carries for 79 yards and another TD in the loss vs. Northwestern. The Boilermakers need to get over the disappointing unnecessary roughness penalty that sealed the loss, as Missouri comes to town Saturday night.
Last week: 9
Up next: vs. Eastern Michigan

Another reason we love sports:@mattstauder, an Indiana equipment manager recently diagnosed with Hodgkin lymphoma, received the game ball, on the 1-year anniversary of his father's death.

13. Rutgers (1-0). The debut of true freshman Art Sitkowski opened with a win, although the quarterback threw three interceptions. Rutgers' defense was stellar, holding Texas State to just 176 total yards and 1-13 on third down. The competition increases in Week 2, as the Scarlet Knights play at Ohio State on BTN.
Last week: 13
Up next: at Ohio State

14. Illinois (1-0). The Fighting Illini were in a dog fight with Kent State; in fact, they trailed, 17-3, at halftime and were tied at 24 going into the fourth quarter. QB AJ Bush did it all for Illinois, throwing for 190 yards and carrying the ball 21 times for 139 yards. Reggie Corbin's TD run in the fourth quarter sealed the victory.
Last week: 14
Up next: vs. Western Illinois