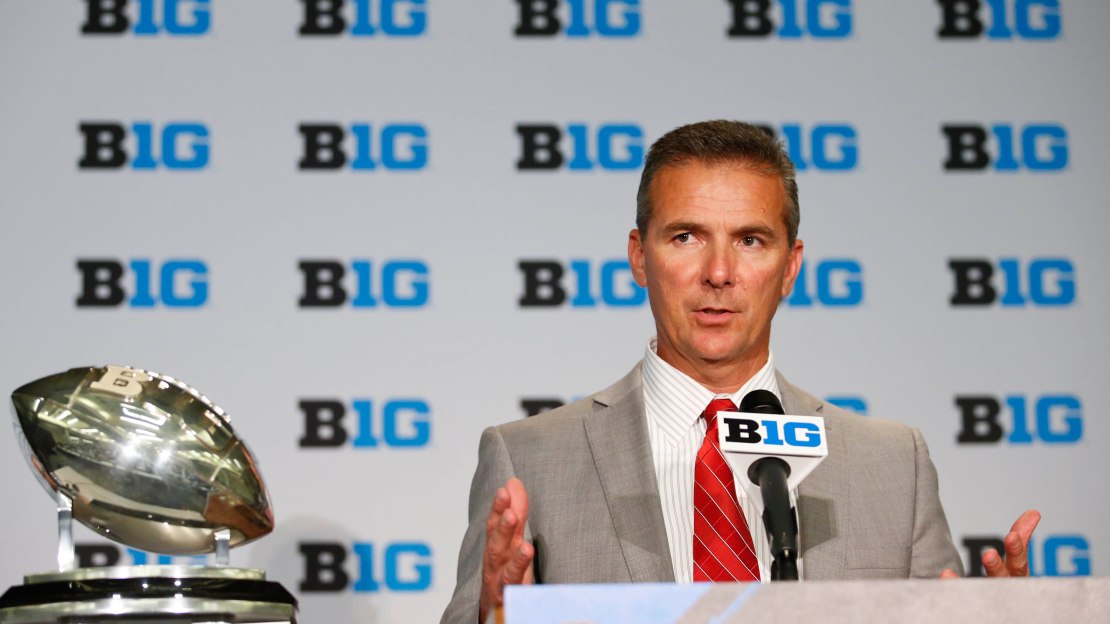 Ohio State on Wednesday night suspended head football coach Urban Meyer three games for mishandling domestic violence accusations, punishing one of the sport's most prominent leaders for keeping an assistant on staff for several years after the coach's wife accused him of abuse.

The move followed a two-week investigation into how Meyer reacted to accusations that former Buckeyes assistant Zach Smith abused his ex-wife, Courtney Smith. Zach Smith was fired last month after she asked a judge for a protective order.

Courtney Smith alleged her husband shoved her against a wall and put his hands around her neck in 2015. The university put Meyer on paid leave and began its investigation after Courtney Smith spoke out publicly, sharing text messages and photos she traded in 2015 with Meyer's wife, Shelley Meyer. Shelley Meyer is a registered nurse and instructor at Ohio State.

"I followed my heart and not my head," Meyer said, quickly reading a written statement to reporters during a news conference after his punishment was announced. "I should have demanded more from him and recognized red flags."

Trustees discussed the decision to punish Meyer in a marathon meeting of more than 12 hours Wednesday while Meyer awaited the decision. Athletic director Gene Smith – who is not related to Zach or Courtney Smith – was also suspended from Aug. 31 through Sept. 16. Both the athletic director and Meyer apologized and said they accepted the punishments.

"I should have done more and I am sorry for that," Meyer said.

The investigation prompted Meyer to insist he followed proper protocols after learning of the 2015 accusations. But he also acknowledged lying to reporters a week earlier when he said he hadn't heard of the incident until shortly before he fired Zach Smith.

The probe directly centered on the question of what Meyer knew and when. Meyer said in his tweet that he always elevated issues through the proper channels, and did so with the Smith situation in 2015. That contradicted what he told reporters at Big Ten media day a week earlier: "I was never told about anything and nothing ever came to light. I've never had a conversation about it. I know nothing about it."

Speaking after the investigation was announced, Zach Smith said he spoke with Meyer at the time and that Smith also knew about the allegations.

Zach Smith said Meyer told him he would be fired if the head coach found out Smith had hit his wife.

Zach Smith – the grandson of late Ohio State coach and Meyer mentor Earle Bruce – has never been criminally charged or convicted of abuse. He has a charge of criminal trespass pending, and the Smiths are due in court next month for a hearing on a restraining order Courtney Smith was granted July 20.

Meyer is heading into his seventh season at Ohio State, where he is 73-8 with a national title in 2014 and two Big Ten Conference championships. Ohio State's Title IX sexual misconduct policy includes reporting allegations of domestic violence made against university employees.

Violating that policy allows Meyer to be fired with cause, according to provisions placed in his contract when it was extended in April by two years. The deal through 2022, increasing Meyer's salary to $7.6 million in 2018, with annual 6 percent raises. Meyer had about $38 million left on his contract.

Ohio State's season starts Sept. 1 with a game against Oregon State in Columbus.

In 2009, Zach Smith was accused of aggravated battery on his pregnant wife while he was working a graduate assistant for Meyer at Florida. The charge was dropped because of insufficient evidence.

Meyer is one of the most accomplished coaches in college football history, with three national championships and a 177-31 record in 16 seasons at Bowling Green, Utah, Florida and Ohio State, the team he grew up rooting for in Northeast Ohio.

Meyer won national championships with Florida in 2006 and `08, but his teams also had more than two dozen players get into trouble with the law. He resigned twice at Florida, citing health reasons, first in the 2009 season after the Gators lost the Southeastern Conference championship game while trying to repeat as national champs. He changed his mind soon after and coached another season. The Gators went 8-5 in 2010, and afterward, Meyer stepped down for good.

Meyer was out of coaching for a season but was hired by Ohio State in November 2011. The Buckeyes had fired Jim Tressel, another national championship-winning coach, before that season for lying to the NCAA and university about rules violation committed by some of his players.

Since returning to coaching, Meyer's program has been one of the most dominant in college football, and his players have mostly stayed out of major trouble.

Meyer faced some criticism in 2013 for allowing running back Carlos Hyde to return to the team after he was charged with striking a woman in a bar. The case was dropped by police when the woman chose not to pursue charges, but Hyde was suspended three games.

The Meyer investigation cost $500,000 and was conducted by the national law firm Debevoise & Plimpton.

Ohio State began investigating Meyer while also facing three federal lawsuits about its response to allegations of groping, leering and other misconduct by a deceased athletic department doctor who treated wrestlers and other students for two decades. The lawsuits alleging sexual abuse by Dr. Richard Strauss say Ohio State facilitated the abuse by ignoring complaints.

Since Ohio State announced an independent investigation in April, more than 100 former students have come forward with accounts of sexual misconduct by Strauss. The allegations range from 1979 to 1997 and involve male athletes from 14 sports, as well as his work at the student health center and his off-campus medical office.