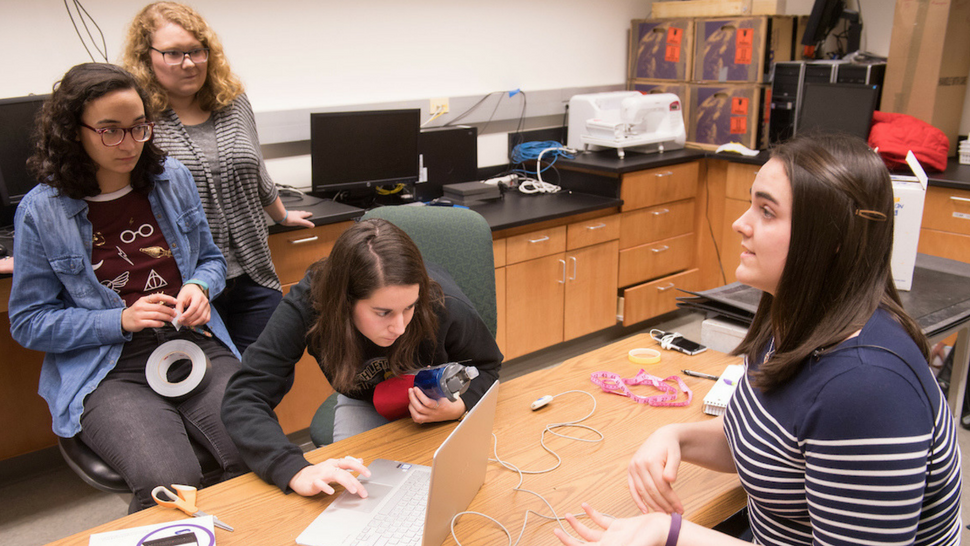 Photo courtesy of the University of Iowa, Office of Strategic Communication

As with most cancers, no one knows for sure what causes aberrant cells to replicate and amass in the breast. What is known is that fully one eight of women in the US will be diagnosed with breast cancer. And, while the physical effects of the disease (and treatment) come to bear on the bodies of these women, intangible effects leave their marks on families and friends, creating bonds forged in tragedy and triumph.

These personal connections motivated a team of biomedical engineering students at the University of Iowa, whose senior project was to create a special bra to help women who have had a unilateral mastectomy - the removal of just one breast after a cancer diagnosis.

?All four of us have in some way been touched by breast cancer,? said Larraga Martinez, one of the students who worked on the project. ?Just seeing how real of a problem it was, just made us care even more. The more people we talked to, people would say, I know someone. Just realizing, I don?t think any of us knew how big this was at the beginning. And to see just how many people we could affect.?

Their product became known as the GAMA Bra, derived from the first letter of each of the students? names - Genevieve Goelz, Anna Rodriguez, Maria Fernanda Larraga Martinez and Ashten Sherman.

The project came about when Amy Kimball, an associate in the Department of Physical Therapy and Rehabilitation Sciences, who previously worked as a physical therapist with breast cancer survivors, wanted to come up with a way to help women who had recently had surgery to remove a breast. She saw cases of truncal lymphedema, a painful swelling that can occur in the arms or torso after mastectomy surgery.

?Quite often I would see women who had a mastectomy [and] they?re put in a post-surgical bra,? Kimball said. ?Between surgery and prosthesis, they would develop truncal lymphedema because the bra support really would only compress the breast side.?

At her physical therapy practice in Waterloo, Iowa, Kimball had been working on a prototype for some time but couldn?t quite get it right.

For Goelz, the project has a deeply personal tone. Her grandmother was diagnosed with breast cancer a few years ago.

?She was able to help us in the beginning,? Goelz recalled. ?We interviewed her a couple of times. Her opinions and feedback were really helpful.?

Sadly, her grandmother passed away earlier this year.

?If anything, it makes this project more meaningful for me. This project means a lot for all of us,? she said.

While the school year is over and each of the Iowa students has graduated, they still hope to keep the product moving along. They are working on obtaining a patent for the bra, in the hopes of getting it to a stage where it can be used by women all over.

?We?ll probably get this idea to a company that makes garments,? Kimball said. ?None of us want to do it for the financial gain. We want to have a product out there so our patients can benefit from it. So, we?re thinking we want to make it and pass it along.?

No matter where the project goes, drawing support and inspiration from loved ones has already made it a success.