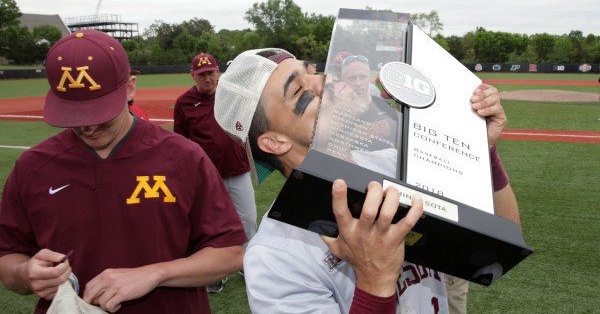 The No. 12-ranked Gopher Baseball team celebrated the 24th Big Ten Championship in program history after defeating Rutgers 5-3 at Bainton Field on Friday afternoon to win the title outright after clinching a share earlier in the week.

In taking the first two games with the Scarlet Knights, No. 12 Minnesota (37-13, 18-4 Big Ten) won each of its eight Big Ten Conference series in 2018 and ten-straight series overall. Head coach John Anderson won his 11th Big Ten regular season title with the victory.

The Gophers struck first against Rutgers (25-25, 7-16 Big Ten) when Alex Boxwell doubled leading off the third inning, coming in to score after a single by Jordan Kozicky and a sacrifice fly off the bat of Toby Hanson. Eli Wilson doubled the lead with a solo home run in the fourth inning, but the Scarlet Knights broke onto the scoreboard by taking advantage of an error on the Minnesota infield. Mike Nyisztor laid down a bunt after a walk to Dan DiGeorgio, but the Gophers' throw ended up going up the first base line, allowing DiGeorgio to come all the way around to score from first.

Brito Serafino (1-2) started for just the second time this season for Rutgers, allowing two earned on five hits in 6.0 innings, but when the Scarlet Knights turned to their bullpen, Micah Coffey had the answer against the new pitcher, lifting a home run down the right field line leading off the seventh. The Maroon & Gold were not done there, taking advantage of two Rutgers errors in the inning to add two more runs with Kozicky earning an RBI single. Two walks and a hit by pitch helped the Gophers load the bases in the inning, but they could not add to the lead once going up 5-1.

Patrick Fredrickson (8-0) worked into the seventh, but a two-run home run off the bat of Kyle Walker ended his day after 6.1 innings of work. He struck out four and allowed two earned on four hits. Brett Schulze got Minnesota out of the inning, but ran into trouble with a single and a hit batter in the eighth. Max Meyer entered from there, getting a ground ball to third where Micah Coffey started a double play to end the inning.

"Max has done a good job of getting ground balls all year," said Coffey after the game. "Fortunately, the guy hit the ball right to me and we were able to turn the double play. Even in a pressure situation, we have guys who can slow the game down. It was a big pitch by Max. He's done a good job for us all year."

Meyer then struck out the side in the ninth to lock up the win and the Gophers' championship.