How Purdue professors are turning Parkinson's therapy into a game: BTN LiveBIG 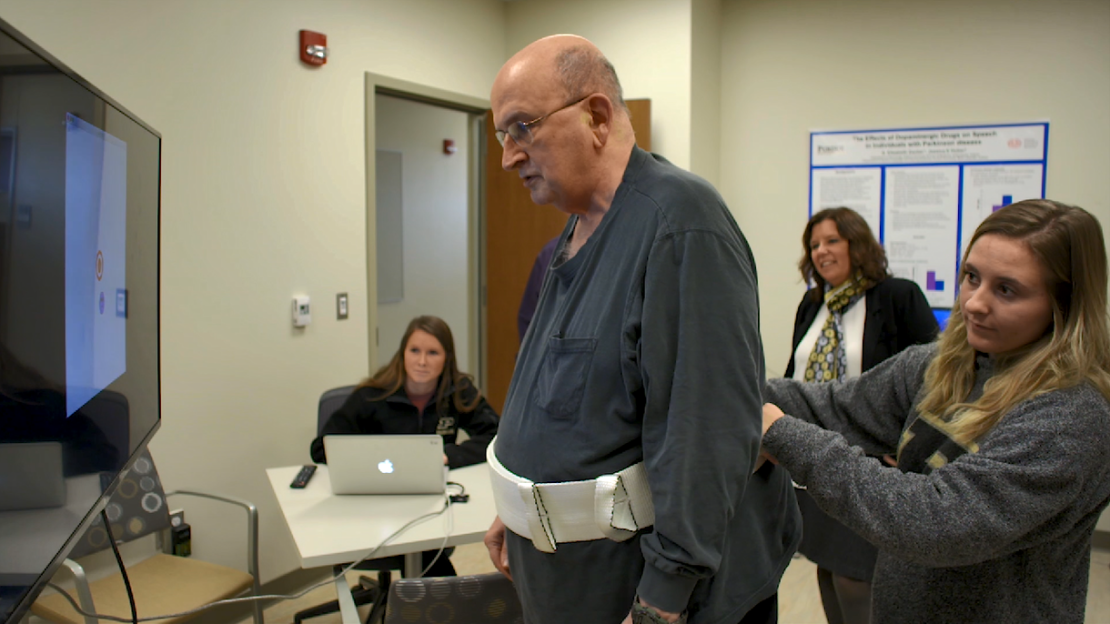 Think of all the tings you do simultaneously: walking and talking, listening with intent while taking notes in class, typing a text on your phone while navigating through your house. You do things in tandem so often that it almost seems automatic.

But what if it wasn?t? What if one day you had to put every ounce of your concentration and mental energy into telling your legs to step in the correct order? What if you had to choose between speaking and moving your body?

For people suffering from Parkinson?s Disease, these are all too common dilemmas.

?One of the issues with Parkinson?s Disease is there?s different neural circuitry in our brain that is disrupted,? says Jeff Haddad, an associate professor of health and kinesiology at Purdue University. ?We have circuitry in our brain that controls what we could call automatic behavior; stuff that you kind of do at a subconscious level, like walk. Then there?s a separate set of neural circuitry that will guide more goal-directed behavior, like reaching for something or taking notes.?

This specifically happened in the basal ganglia, a nuclei-dense region of the brain that acts like a traffic cop for our mental signals. With Parkinson?s, Haddad notes, those disruptions in the brain?s circuitry lead to competition among signals being sent from the brain. The most familiar Parkinson's symptoms are a shuffling gait and tremors, but there are a host of non-motor affects, such as cognitive issues and problems with speech.

Typically therapies for Parkinson?s are separated into two categories: physical and cognitive/speech. Haddad and his colleague Jessica Huber, a professor of speech, language and hearing sciences at Purdue, wondered what would happen if they combined the two. Using platforms like the Nintendo Wii and the Microsoft Kinect, they created a suite of games that challenge patient?s cognition and motor skills concurrently.

For example, one game is similar to the popular handheld game of the seventies and eighties, Simon. On the screen are four quarter circles of different colors. The circles light up in a random sequence. The patient must memorize the sequence and then use their body to move a cursor over the correct quarter circles. The game activates memory function as well as core motor skills and balance all at once.

?Jeff and I were thinking that if you have trouble multitasking because you need to have more explicit control, it would make more sense to train these things together,? says Huber, noting that most slips and falls, in Parkinson?s patients and the general population, occur when a person is trying to do two things at once.

There are also numerous ancillary benefits to the program, Huber notes. By gamifying therapy sessions, the work becomes more fun for the patient, and can be a motivating factor for family and friends to join in. Also, as the games are available on connected platforms like the Wii, therapy can be moved into the home; therapists can monitor a patient?s progress remotely and new programs can be downloaded as progress is made.

?The goal is to make something that is fun, but at the same time challenging and therapeutic in way that will actually help the patient,? says Haddad. ?We did a number of measures, like studying [participant?s] speech, gait, balance and even some psychosocial measures, like their quality of life. Our preliminary evidence suggests that the games do seem to be very helpful and do seem to be improving some of the symptoms.?

While Huber and Haddad are still refining their therapy programs with the help of students and faculty from the departments of computer science, kinesiology, and speech pathology, they note that they?d like to see the program evolve into an app that would be available for patients to download onto their mobile devices.

?Staying active is extremely important,? says Haddad. ?Ultimately, we want to make something that works and something that is accessible for people.?